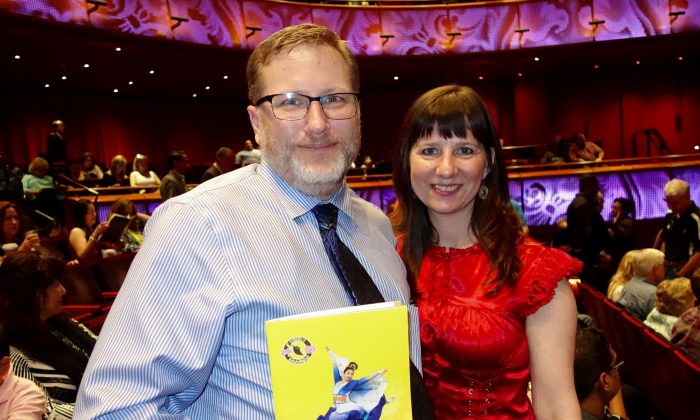 SAN ANTONIO—Travis and Allison Turner are avid practitioners of tai chi. When they watched Shen Yun’s performance in San Antonio on Friday evening, they witnessed the fascinating history and culture behind their interest in martial arts.

Shen Yun Performing Arts’s mission is to revive the 5,000 years of Chinese civilization through music and dance.

According to a blog by Ming Liu on Shen Yun’s website, martial arts and Chinese dance share a good deal of history: “Chinese martial arts and classical Chinese dance can be thought of as twins conceived 5,000 years ago by the earliest progenitors of Chinese culture. Although spawned from the same roots, these siblings with vastly contrasting personalities served very different purposes. Whereas Chinese martial arts fulfilled the practical purpose of fighting and defending, classical Chinese dance entertained dignitaries of the imperial court as a performing art.”

And supporting the formation of both of these twin systems were the spiritual beliefs that informed much of ancient Chinese culture. But during the ’60s Cultural Revolution, these traditional values and beliefs were denounced, almost leading to their complete destruction.

“To see all of that get stifled and repressed in China, it is a shame to see all of this great, grand culture get pushed down and hidden away,” said Mr. Turner, who works in the U.S. Department of Defense. “In a relatively short period of time, it [Chinese culture] was just crushed. And it is heart-breaking,” he said.

Shen Yun is not allowed to perform in China, in part, because of the spiritual themes it explores. But those very ideas resonated with the Turners, who practice tai chi and meditation. The dance performance portraying the adventures of Monkey King particularly left an impression. “It is nice to see there is more to it than just our little classroom. This is where it all comes from, where those traditions started,” said Mr. Turner.

Mrs. Turner also lamented the fact that Chinese people in China cannot view Shen Yun. “That their own people cannot even appreciate their own culture, background, history, and tradition—it is a little heart-breaking to come to that realization,” she said.

Watching Shen Yun’s performance, they both understood how precious it was to have the freedom of expression in America.

“It reminds us to hold on to what we have, and that we not let it slip away,” Mr. Turner reflected.