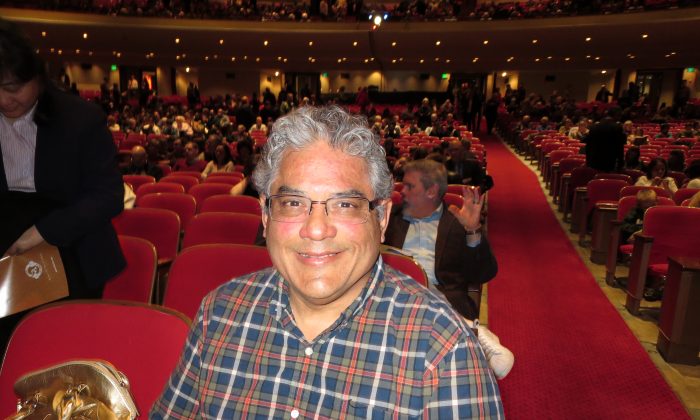 “It’s beautiful,” he said during the intermission.

Shen Yun seeks to revive 5,000 years of divinely imparted Chinese culture, a culture nearly ruined at the hands of the communist regime over the past 60 years. Mr. Griego felt that Shen Yun’s portrayal of the vanishing traditional ideals in modern day China was most poignant.

“You know, regarding the repression that they are under now, they seem to be using a very passive form of informing the rest of the world what they think about it,” he said.

Mr. Griego felt that the kind of determination required by Shen Yun’s performers was quite impressive. He added that he was also touched by Shen Yun “speaking from their heart” about the extreme repression by the communist regime.

“And they’re going to stay steadfast through there and hang on to their culture,” he said.

Mr. Griego was touched by the unique energy coursing through Shen Yun. “I believe it’s full of variants,” he said. “A lot of varying degrees of colors, of dance moves.”

At the heart of a Shen Yun performance is classical Chinese dance, one of the most rigorous and expressive art forms in the world.

As for the performance overall, Mr. Griego would only describe it as “flawlessly performed, but complicated.”

“And the stories they are telling seem timeless to me,” he added.