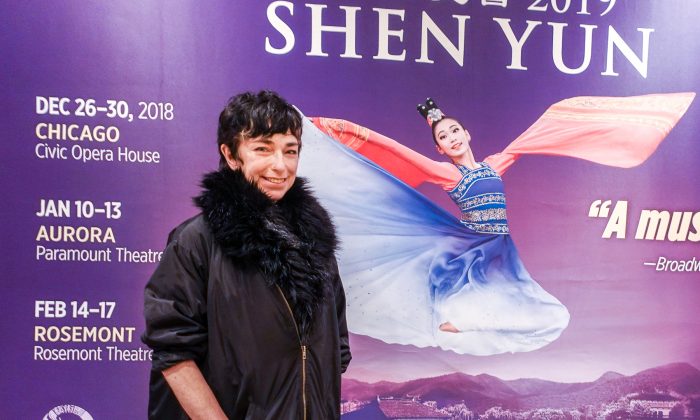 AURORA, Ill.—Chicago artist Maja Bosen treated herself to Shen Yun for the third time on Jan. 11 at the Paramount Theatre.

“It was very engaging then. … It’s very wonderful to see how they’ve changed it up and made it more relevant to some of the things that are happening in the world now,” she said.

Maja Bosen has her own art studio in Chicago at the Zhou B Art Center. She also does some work in advertising and design. After seeing Shen Yun Performing Arts Global Company’s matinee performance on this day, she hopes the company will continue to persevere in their effort to revive traditional Chinese culture.

“It is wonderful to see their growth and the fact that they are putting so much effort and providing the world with such beauty,” she said.

Ms. Bosen mentioned that this third time seeing Shen Yun, she felt it was more relevant to the world today. She elaborated that when several pieces depicted the correlation between the rise of communist regime in China and the suppression of religious thought, it really struck a chord within her.

“I feel like in our society now there is a great spiritual divide, and with lack of purpose and lack of focus and I guess the rise of populism was definitely a theme right now,” she said.

She felt there was an underlying theme throughout the performance that was trying to encourage us to return to being a society where we look out for each other and try to become better citizens and better human beings.

“It resonated with me today for sure,” she added. “That [theme] was something I thought was really interesting that they took that stride, or took that step … to reveal an idea of what their authentic selves are.”

Speaking about the strides the performers have taken, the artist elaborated, “It was about getting back to your roots and what your core values are and how to stay true to those core values despite the fact you are being inundated with a number of other messages and a lot of power and fear and in that moment when you are surrounded by darkness.”

She specifically mentioned one of the pieces in the performance where there were students who were studying and practicing meditation.

“They were focusing on their values, whereas the communist regime that was depicted was coming in and interjecting a commonality and rule of law that was not respectful of people’s core and spiritual betterment,” she said.

From an artist’s perspective, she said, “I’ve seen a lot of theater and the use of color was astounding.”

“I am very grateful that people pay attention, and value the fact that this is a tremendous amount of training and discipline and that they can give their gifts in this lifetime.”

With reporting by Valorie Avore and Andrew Darin.