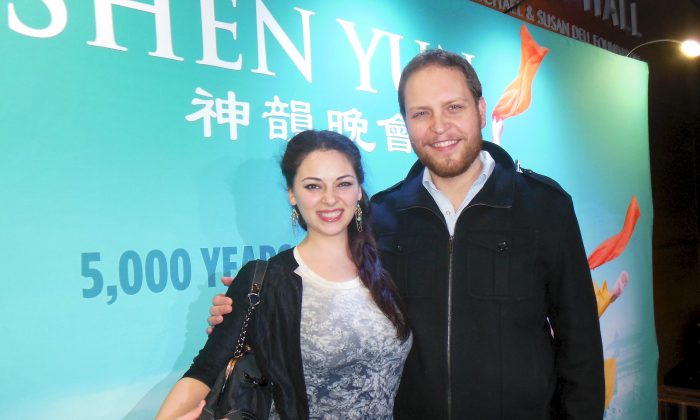 Instrumentalist Joshua Thomson and dancer Liliana Espinosa enjoyed their night out with Shen Yun Performing Arts staged at The Long Center for the Performing Arts in Austin, on Dec. 29, 2014. (Sherry Dong/Epoch Times)

“Phenomenal,” the saxophonist and woodwind musician said, appreciating the difficulty of blending two different instrumental styles, the soft traditional Eastern Chinese sounds with the harder classical Western instruments. He explained that musical diversity rarely happened in the past and he enjoyed and welcomed the blending of Eastern and Western music today.

“I think the fact that there are modern themes in the show makes the East and West music more cohesive, whereas in some of the more traditional acts, I think it can be problematic, because you’re showcasing traditions maybe that are several hundred years old,” Mr. Thomson said.

“It’s a modern blend, and a message not just focusing on [5,000] years ago, for example. So I thought that was cool. I really liked that.”

Ms. Espinosa said, “I love their form, and you can see that they have been working on it for a long, long time, just perfected it—just beautiful. I think the silk that they wear are just beautiful too, the way it blends with the dance, it is wonderful.”

Based in New York, Shen Yun was created with just one company. Today, there are four touring simultaneously around the world with the mission to revive China’s 5,000-year-old divinely inspired culture in classical Chinese dance and music, lost under 60 years of communist rule.

“I think it is just a beautiful dance,” Ms. Espinosa said.

Mr. Thomson was equally impressed pointing out the skilful transitions between the orchestra and the dancers.

“All of the beats and all of the instrumentation, how it blended with every scene, really impressive. It was a pleasure for the audience to hear these traditional Chinese instruments.

“I saw the show was cohesive in that it brought to light a lot of the traditions from different regions of China, and also mixed in contemporary China.

“It was wonderful, it was a really beautiful production, and I would like to see it again next year.”

Summarizing, Mr. Thomson could see the universal struggle of mankind and humanity, of persevering against oppression, and fighting for one’s beliefs, culture and customs.

“Obviously, this production cannot be done, as we learned, in China today. That’s very telling of this. I think it’s a very important production, and it’s wonderful that it’s a worldwide endeavor, traveling throughout the world.”

Shen Yun has since grown to four companies performing simultaneously around the world.

“Wonderful, they were all wonderful,” Mr. Thomson said of the vocalists. “We don’t get vocalists like that often here in Texas, so it was wonderful.”

He said he thought the soprano was amazing.

“I thought her range was incredible, specifically, her vocal range. All of them, and to hear the inflections and the tonality and the timbre of the vocals is really amazing.

“All the artists here, you can tell they’ve been working [hard] and are world-class, to be in a production of this scale in Austin and on the road in US and abroad.”

He was grateful for the animated backdrop screen that translated the lyrics from Chinese to English subtitles.

“Otherwise I wouldn’t have known [what the words meant],” Mr. Thomson said laughing. “It seems like it was more of a folkloric, old message of hope … That’s kind of what I got from the whole thing [show]. A lot of the undertones are very redeeming.”

For Ms. Espinosa, Shen Yun left her not only wanting to be more disciplined in her own dance, but to strive to reach the same perfection as the Shen Yun dancers.

“It’s just wonderful. It’s motivation for me to continue studying and practicing every day.”