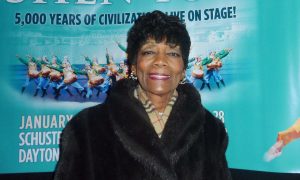 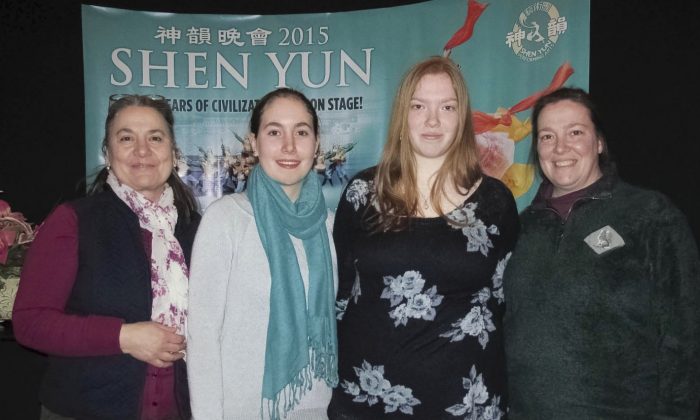 On Feb. 28, mothers and daughters, (L to R) Emanuela and Sophia Fremont and Carrie and Jody Blair attend Shen Yun at the Aronoff Center for the Arts. (Charlie Lu/Epoch Times)
Cincinnati

Shen Yun ‘Is What Entertainment Should Be’

CINCINNATI—”We were in the first row, so we did not miss anything!” said Emanuela Fremont about the Shen Yun Performing Arts Touring Company’s performance. She attended the performance at the request of a friend, Jody Blair, and they both brought their daughters.

Mothers and daughters found Shen Yun’s journey of 5,000 years of divinely inspired Chinese civilization to be a discovery of culture, beauty, dance, music, and deep spiritualism. It all added up to a wonderful experience on Feb 28 at the Aronoff Center for the Arts.

“That is what entertainment should be,” said Mrs. Fremont. She explains that the performers were “dressed, not unclothed and with a lot of dignity, grace, and colors. [There was] “intensity and culture, a reference to reality of a country. It was a discovery.”

“It’s the beauty—it came out in every direction—the music, choreography, costumes. It was just a joy really,” said Mrs. Fremont. “My daughter [Sophia Fremont] does Indian classical dance, so it was even more interesting to see.”

At the heart of Shen Yun is storytelling through classical Chinese dance. It has been refined and passed down for thousands of years and has become a distinct and rigorous dance system.

“I love it,” said Sophia about the dance. The dancers “did a really great job with being really expressive and acting and portraying the story. You can tell there is something about them. They really enjoy what they do,” she said.

Mrs. Blair found the dance to be elegant and was impressed with how the history was expressed through dance and music. “I liked the historical perspective because I was educated this evening.”

She was also captivated by the Shen Yun Performing Arts Orchestra and its combination of traditional Western and Eastern instruments, such as the erhu. “Music is my passion. I learned [about] different instruments that we were never exposed to. It was an experience that I will come back and enjoy again,” Mrs. Blair said.

“It is really wonderful that it has a somewhat spiritual content to it because not everyone is religious, but you can definitely appreciate how deep the culture runs within the people,” said Sophia. “It’s really nice for the Western culture to get a taste of that because it’s different, … very deep and it’s very important.”

For her mother, “It is becoming a forgotten thing to believe in God, and do the right thing in the right place, be honorable. All those qualities seem to be forgotten in our shows … and the contents are not that deep. So it is really a good … lesson for our culture,” Mrs. Fremont said.

Mrs. Blair’s daughter, Carrie Blair, who is in high school said, “They also integrated different problems in their society through this dance.”

She was referring to the Chinese regime’s persecution, which can lead to arrest and even death, of a traditional meditation group Falun Dafa (or Falun Gong).

“It was also portrayed in a beautiful way … and something the Western culture could enjoy and not have to go and read news stories … that nobody is really interested in,” she said.

Another aspect of the musical features of Shen Yun is its award-winning vocalists. “Their ability to perform bel canto while retaining perfect Chinese diction is unparalleled,” states the Shen Yun website. To enhance the experience the song lyrics are projected behind the singer.

“I found it very helpful to have the words,” said Mrs. Blair, [as] it added more meaning because there was an understanding … a connection.” She said that everyone can relate to the spiritual aspect of what the soloist were communicating.

For Carrie, the communication was through dance. “They kind of eliminated all the barriers—language, religions—with the dance,” said Carrie. “I mean you had to put up the words to translate to English for the soloists, but when it comes to dance you don’t have to have translations. You can understand exactly what they are saying without them having to speak a word of any different language.”

“They don’t create division, if anything, they unite, so its great, ” said Mrs. Fremont.