‘Shen Yun is the pinnacle of human civilization,’ Says Chinese Ph.D. in Philosophy 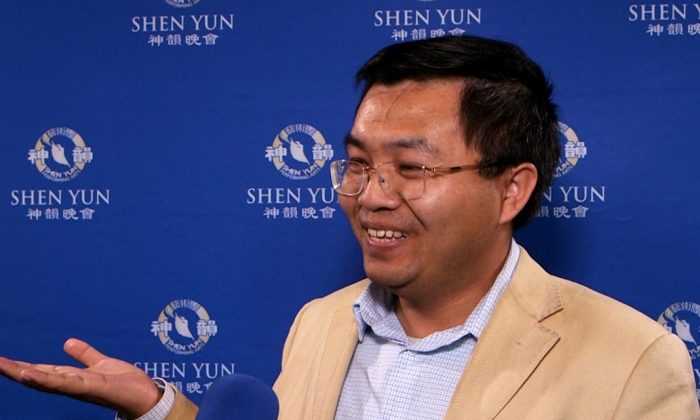 Lijun Hu after Shen Yun Performing Arts at the at California Center for the Arts the afternoon of Jan. 27, 2016. (Courtesy of NTD Television)

ESCONDIDO, Calif.—The generation of Chinese scholars born after the 1970s tends to look away from Chinese traditions, while searching for inspiration from Western sources. A Ph.D. in Western philosophy and now a student of theology, Mr. Lijun Hu was a prime example. His view about ancient Chinese culture completely changed after watching Shen Yun Performing Arts New York Company at California Center for the Arts the afternoon of Jan. 28.

‘I cried at the start’

“I cried at the start of the performance because I saw the pinnacle of what human art can reach,” said Mr. Hu after the show concluded. “The quintessence of the Chinese culture is manifested in such exquisite beauty and such divine virtues.”

“Today, I finally realize that the traditional Chinese culture, which emphasizes inner beauty and reverence for the divine, and the qualities of a sage and a king in one person, is the zenith of human civilization. Shen Yun is incomparable in its display of this culture. I wept as I am so grateful for the opportunity to see Shen Yun,” he said.

The Pursuit for ‘Truth and the Source of Civilization’

Chinese educated, Mr. Hu spent the last seven years in the United States attempting to advance his pursuit for “the truth and the source of civilization,” as he puts it. “Frankly speaking, I have always harbored this condescending notion towards Chinese culture because that was what we’ve been taught growing up in China.”

Mr. Hu searched for answers in the Western culture, but he was disappointed. “The Western philosophy explains the relationship among humans. But it can’t handle the relationship between humans and the divine. Therefore, in today’s society, people are lost in the material world.

“I realized that what we have thrown away is actually the height of civilization. The best parts of our own Chinese traditions have been thrown away, resulting in a problem-ridden society. It hurts to think about it,” he said.

Yet Shen Yun completely changed Mr. Hu’s view. “Shen Yun makes me realize how wonderful and noble our culture is. Shen Yun has inspired me to start studying traditional Chinese culture and our ancient beliefs. I will forever learn from Shen Yun. She has brought an ancient civilization to life,” he said.

With a sparkle in his eyes, he added, “Shen Yun is priceless!”

“Unmatched aesthetics, gorgeous! I can’t imagine how Shen Yun artists are able to present the divine beauty in such a sacred way,” said Mr. Hu. “After I could contain my tears, I smiled all the way through the show. Every scene is the utmost display of arts in its perfection.”

“I was completely mesmerized by the costumes, the dance and the artists’ facial expressions. I forgot about the world around me; I was completely submerged in the height of humanity,” Mr. Hu said.

‘The lyrics provide us with hope for humanity’

Mr. Hu thinks highly of the lyrics from Shen Yun’s vocal soloists, which were displayed on the stage’s backdrop in both Chinese and English.

“It is very well written. It pinpoints the problems of material-centric modern-day culture. Whether it’s in China or America, people pursue wealth and fame, yet we forget about the eternal elements of life, and we forget about the virtues. The lyrics provide us with hope for humanity, which lies in the belief in the divine.”

Shen Yun a ‘Living Museum of the Beauty of Life’

Mr. Hu has visited the art museums in Washington, D.C., Chicago and New York; however, he considers Shen Yun a “living museum of the beauty of life and the nobility of the soul.”

“Through their performances on stage, I see the hearts of Shen Yun artists,” he said. “They are constantly striving towards the truth, towards perfection, and towards a higher realm. Their performance reflects the height of the human spirit. It touched my soul.

“If today’s society is anything like what’s been portrayed on stage, our world would have been much more peaceful. If the virtues displayed on stage were used in the interactions among individuals, nations, and races, there would not be so many conflicts in the world.”

According to its website, Shen Yun’s mission is to revive 5,000 years of civilization. As Mr. Hu understands, “What Shen Yun presents is the key to solve today’s social issues. If we humans can rekindle our connection to the traditions, to rediscover virtues just as Shen Yun depicts in music and dance, that’s how humans are supposed to live. I think this is the only way out for humanity today.

I hope that eventually Shen Yun will bring about the renaissance of Chinese culture around the world.
— Lijun Hu

“I hope every Chinese scholar has an opportunity to watch Shen Yun. I hope for more and more Shen Yun performances around the world. I hope that eventually Shen Yun will bring about the renaissance of Chinese culture around the world.

“I think Shen Yun is connecting the world’s people through Chinese classical art forms and belief. I believe Shen Yun will ignite the flame of the human spirit and forever shine on a better civilization to come,” Mr. Hu added.

Mr. Hu clearly felt transformed and awakened to his own heritage by Shen Yun.

He said, “Confucius says, ‘If a man in the morning hears the Tao, he may die in the evening without regret.’ Even if I die now, I have no regrets because I have seen the pinnacle of human civilization in Shen Yun.”