Shen Yun Is ‘So Beautiful, a Feast for the Eyes’ 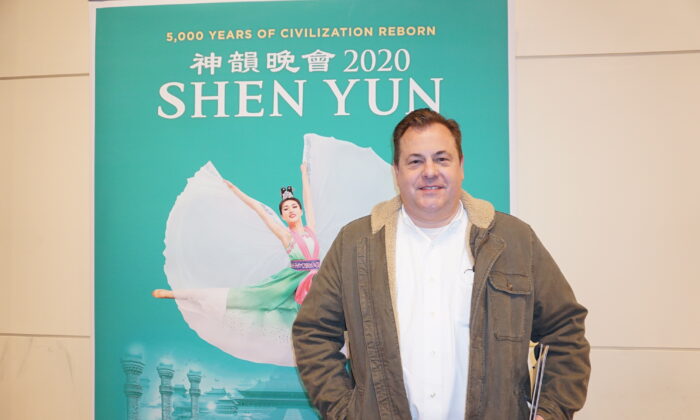 STAMFORD, Conn.—When a classical Chinese dance company from New York took to the stage at The Palace Theatre on Friday, its artistry and elegance elevated the heart of one theatergoer to other realms.

“I felt like I was transported to another place, an otherworldly fantasy land, not on this earth. It definitely had that spiritual quality to it. It sort of brought you to another level,” said David Kurtz, a hospital administrator, who attended the Dec. 27, 2019, performance of Shen Yun Performing Arts.

I love it. It was so beautiful. So much to look at, a feast for the eyes.
— David Kurtz, hospital administrator

Based in New York, Shen Yun’s mission is to revive China’s 5,000 years of civilization through highly expressive dance, world-class music, original costumes, and universal principles such as beauty, virtue, and faith.

“The quality was amazing,” Kurtz said during a break in the performance. “The dancing, the precision of the dancers was exactly together—perfectly. You could tell a lot of rehearsal went into it. You can tell, it shows.”

As for the artists’ mission itself, Kurtz commented that “they did a great job. I wish I knew more of the different characters that they were all playing. Those are all derived from ancient folk tales.”

“[The musicians] were very great. They were very good, very good. And the fact that it’s original—they said it is an original show every year—that’s a lot of work also that goes into that.”

Kurtz was surprised to learn that Shen Yun’s artistic director composes all of the music each year.

“They’ve got a lot to do every year, to create a whole new show. To Shen Yun’s artistic director I would say: ‘Wonderful job. Terrific job. Very good.'”

In addition to ancient legends, Shen Yun portrays stories of the ongoing struggle for people of faith in modern China. The communist regime has been persecuting spiritual believers of all types since the Cultural Revolution of the 1960s and has turned its attention toward followers of the ancient meditation practice of Falun Dafa with alarming force in recent times.

Kurtz hadn’t learned very much about this persecution in China before he saw the dances about it in Shen Yun.

“There are a lot of people in the Western world who have no idea about what’s going on in the far East. They have no idea, so this is one way of educating them.”

This year, China’s communist regime has been paying individuals to hold up signs outside of Shen Yun’s performances to attempt to persuade people not to attend. This follows years of interference toward Shen Yun, by the regime, throughout the world. Shen Yun has never been allowed to perform inside China, and its international venues have faced intense pressure by Chinese officials to drop the group.

Kurtz noted that these sorts of attempts serve to backfire on the regime.

“To me, whenever you do something like that, it creates more interest. When I see that [the ‘protestors’], I want to see the show even more.”