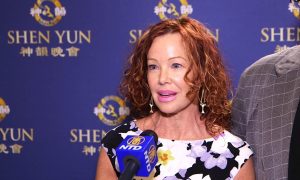 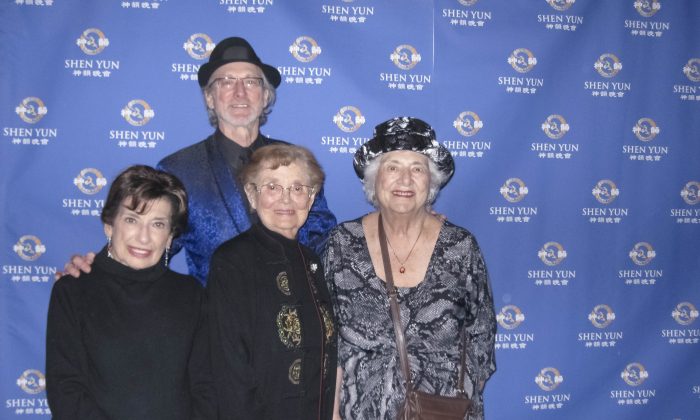 CHICAGO—Witnessing genuine traditional Chinese culture on stage as performed by Shen Yun Performing Arts can be moving regardless of one’s age, particularly if one’s roots are in China. This was the case for the White family, as well as a separate party of twin girls.

After seeing an advertisement for Shen Yun, Muria White said, “My son said, ‘Mom, I’ve got to take you.'”

The reason for his suggestion was that Mrs. White was born in China and lived there for 18 years before falling in love and moving to Indiana.

She and her son, Dean White, and two friends, Sasha Murphy and Marian Bittner, drove an hour from Indiana to Chicago’s Cadillac Palace Theatre to attend the afternoon performance of Shen Yun on March 8.

“I have enjoyed this very much,” said Mrs. White at intermission.

“It’s very exciting and expressive. I love all the color and the action,” said Mr. White, who is a remodeling contractor and owner of the Etropal Restaurant and Lounge. The restaurant creates private mystery theater dinners in LaPorte, Ind.

“It was very heartfelt and will bring some tears to [one’s] eyes,” Mr. White said. The performance moved him and caused him to reminisce about his mother being born in China. The projected backdrops showing China’s countryside reminded him of his mother’s stories of China.

Sasha Murphy said that she was so glad to see Shen Yun by accident, as the Whites had ended up with an extra ticket. “It’s just so unbelievably beautiful. I am so surprised at the special effects.”

She is referring to the state-of-the-arts animated backdrops used for the 20 mini-dance dramas that often interact with the performers and take the audience to far away lands and heavenly realms.

“Amazing. Oh, the dancing, special effects, music, and scenery! It’s overwhelming, it’s so beautiful,” said Ms. Bittner. “It just one of the most beautiful things I have ever seen. I love it.”

Traditional Chinese culture has a deep respect for the divine, along with such “principles benevolence and justice, propriety and wisdom, respect for the heavens, and divine retribution,” states Shen Yun website.

“What I see is a universal message… the whole world knows there is a divine something. And that’s a good message. It doesn’t matter where you are or where you are from. We all have that spiritual side.”

“It’s still one God,” she said three times, with everyone in her party agreeing.

School-aged twin sisters with a Chinese heritage and their friends, had a very good time at Shen Yun. They attended the March 7 afternoon performance.

“It made me feel really good because it is also a part of my culture,” said Alex.

She particularly enjoyed the dance “Sleeves of Grace”, where the long flowing dress sleeves act as a prop. “I really liked the clothing that all of the ladies were wearing. I just really liked how graceful they were, and that was just really nice,” she said.

Her twin sister, Bella, said that “Since I am Chinese, it makes me feel sort of welcomed.”

Bella and her friend Ellis really liked the mini-dance drama, The Fable of the Magic Brush.

“I liked [how the dancers would] paint and then how it came to life,” Ellis said.

Buri, another friend, said, “My favorite one is all of them. I really like the outfits, too. It’s just really calm, and the music is really happy.”

The girls came because fifth-grader Leila said, “My grandma, she lives in Ohio, apparently [Shen Yun] already been in Ohio, and she was bugging us to come. We decided to invite a couple of our friends, so they came here.”

“It’s really a great show. … I would like to come next year,” Leila said.

Blond-haired Ellis came dressed for the show in her pretty pink Chinese-designed dress. “I thought if you are going to watch Chinese, why not be Chinese because it’s one of my favorite [outfits],” she said.