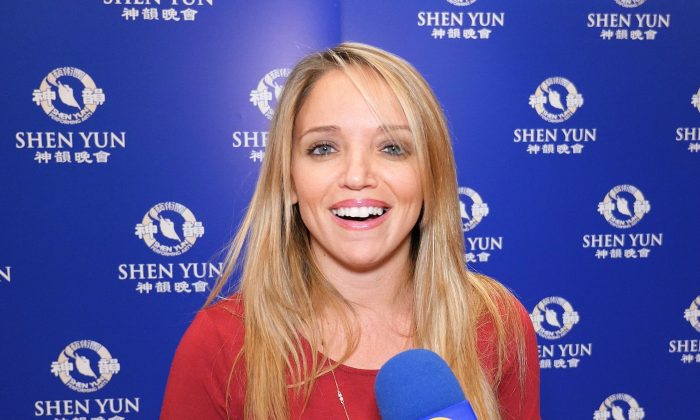 Marilena Militellor after Shen Yun at Lincoln Center, on Jan.15, 2016, said, "It's a little magical." (Courtesy of NTD Television)

NEW YORK—After Italian television host Marilena Militellor saw Shen Yun Performing Arts on Jan. 15 at Lincoln Center, she felt like she had been to a different world.

“It’s a little magical,” she said.

And the opera was a plus, she said.

Complemented by a unique orchestra that blends Eastern and Western instruments, the classically trained dancers tell ancient stories through the dance movements.

But it’s not only dancing. Chinese bel canto vocalists sing Chinese texts of original works. The themes of their songs contain deep layers of meaning that encourage audiences to think about why human life is on this earth.

Singing bel canto in Chinese is unusual, since normally it’s sung in Italian.

“Even if it was Chinese, it’s just beautiful, the music was just perfect, delicate, very soft,” Ms. Militellor said.

Ms. Militellor was excited that Shen Yun would be going to Italy too. She said the Italian people would enjoy being in a magical world, seeing the beautiful ladies, and witnessing the beautiful, colorful costumes.

Italians know a thing or two about fashion, she said. She loved the colors, the divine hairstyles, and the way the dancers glided across the stage.

“I was like in a magical world, to see all these beautiful ladies and the dressings and the costumes, and the way they dress—so perfect!” she said.

A lover of colors, Ms. Militellor believes that colors are a message. She particularly liked the bright yellow and blue worn by performers in some of the scenes.

“I’m a very positive person as you see, … I love colors,” she said.

“I would love to see it again,” Ms. Militellor said.