Shen Yun Is Beyond Expectations for Regular Theatergoer 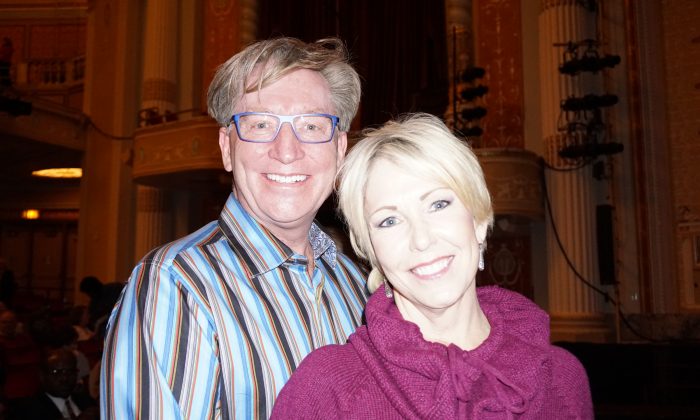 CLEVELAND—For regular patron and live performance aficionado, Joni Davis had difficulty getting tickets for Shen Yun Performing Arts due to it having been sold out in previous years. But she got the chance to see it on Jan. 30 at the State Theater and found that it was well worth the wait.

“It’s been spectacular,” she said. “We visit the Cleveland Orchestra regularly and this has been beyond our expectations … I didn’t expect it to be as moving as it is.”

New York-based Shen Yun has four music and dance companies that tour the world simultaneously for about six months each year in some 20 countries and 100 cities.

Joni Davis, retired executive assistant for DRB Systems and former makeup artist for Chanel, attended the matinee performance with her significant other Jerry, a retired firefighter.

“We frequent Playhouse Square,” she explained. “And this is a show that it’s been difficult getting tickets [for] and it’s probably one of the more popular shows and we finally landed the tickets. We were excited.”

“Through the universal language of music and dance, Shen Yun weaves a wondrous tapestry of heavenly realms, ancient legends, and modern heroic tales, taking you on a journey through 5,000 years of Chinese culture. Its stunning beauty and tremendous energy leave audiences uplifted and inspired,” the company’s website states.

As Ms. Davis partook in this journey, she was overcome with a sense of appreciation and gratitude—appreciation for the freedom we have in America, and gratitude to be able to express oneself spiritually or otherwise without fear of persecution.

Several segments of the performance depict modern-day China and the current persecution of Falun Dafa—a peaceful meditation practice based on the guiding principles of Truthfulness, Benevolence, and Forbearance.

Being a woman of faith, Ms. Davis was very moved by the idea that we have freedom to express ourselves spiritually, yet people in China are so persecuted for it.

“I guess I didn’t realize that in communist China how much they suffer for their faith and yet they rise above it, and we as Westerners aren’t so aware of that. Maybe we turn our eyes against it, or we just don’t see it.”

Overall, Ms. Davis walked away from the performance with the feeling of profound gratitude and how blessed we are to be in this nation and to enjoy the freedoms that we have.