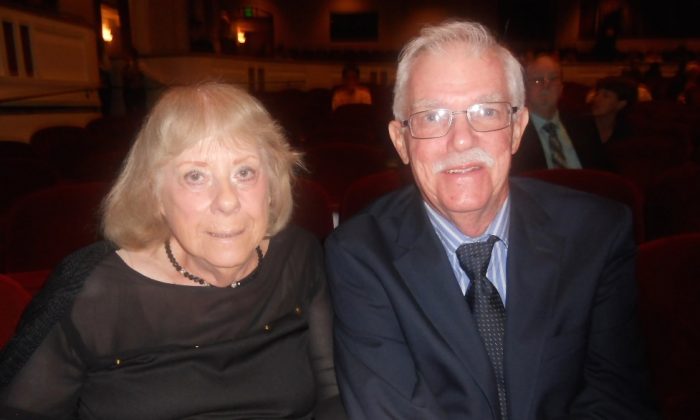 ST. PETERSBURG, Fla.—”It’s a show of great beauty—the music, the synchronization of the dancers, the costumes, the background scenery, the message,” said Lucy Spongberg, who attended the Shen Yun performance with her husband, Gary Spongberg, at the Mahaffey Theater on April 3.

Mrs. Spongberg, a retired teacher, was especially struck by the story-based dances that illustrate the effect of compassion: “I thought that was very touching, very meaningful, and very appropriate in this day and age, when more compassion is needed, and more understanding and help for each other.”

“The word that comes to mind, first of all, is peaceful, and especially in this day and age, [peace] is something that one wishes for very much. Peace among the people of the earth—all people,” she said.

Each season, New York-based Shen Yun Performing Arts produces an all-new show for its world tour. The performance inspires smiles, tears, a sense of well-being, and awe in theatergoers of all ages, nationalities, and backgrounds.

Speaking of the soprano, he said, “The singer has a beautiful voice—gives you an overall feeling of comfort and serenity just to watch it, and peacefulness.”

He said they had checked Shen Yun on the website and it looked very interesting. “And this is even more so than we could have imagined,” he added.

Shen Yun Performing Arts World Company will complete the Florida leg of its world tour this month with performances in Miami and West Palm Beach.