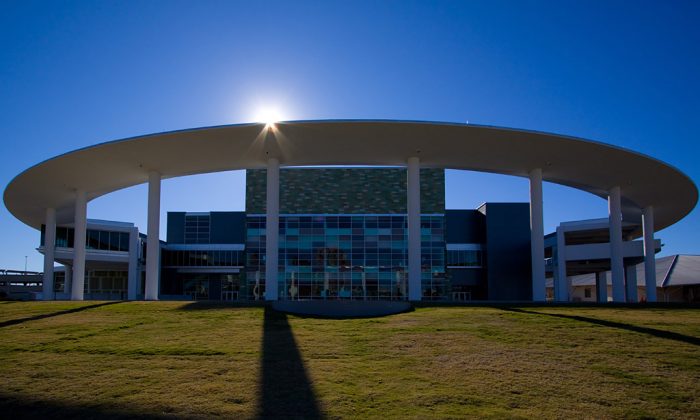 The Long Center For The Performing Arts in Austin, Texas. (Randy Heisch/Epoch Times)

AUSTIN, Texas—”It is incredibly beautiful,” said Ben Sternman, a Rabbi, at the world premiere performance of Shen Yun Performing Arts World Company at The Long Center For The Performing Arts in Austin on Dec. 26.

Mr. Sternman attended the New York-based Shen Yun’s performance with Oupemandujano Garcia, who is now retired, and Frank Garcia, a technical trainer for a major manufacturer.

Mr. Sternman was particularly impressed with the quality of the performance. “It looks like they have taken forever to learn how to do this. It is so … difficult, and yet at the same time, they make it really beautiful,” he said.

“The way the fabrics flow, and the dance steps!” he added. “There is this one dance step that the women are taking, where they lean forward and their feet are going so fast, and it makes a circle with all the fabrics.

“It is absolutely gorgeous. I’m loving it,” he added.

According to the Shen Yun website, “Classical Chinese dance has its own set of training methods in basic skills and has strict training in both physical expression and specific postures. It also involves learning combinations of leaps, turns, flips, spins, and other aerial and tumbling techniques. It is a vast and independent system of dance.”

Ms. Garcia was also very impressed with the dancers, and praised “the fluidity of the dance, and the curvature of the hand.”

As a quilter she loved the “vibrancy of the colors” and the combinations and was even taking notes so she could use them in her future creations.

“The mint green with the male pink or the turquoise with the periwinkle blue, with the hot pink. It is gorgeous, it is just beautiful,” she said.

Ms. Garcia appreciated the sopranos. “The sopranos have an incredible voice … it just flows and the emotions on those songs are incredible,” she said.

Mr. Garcia agreed with his companions.

“I just love it. I love the colors! The precision of which the dancers move is very interesting, and you can tell, they work very, very hard to learn their craft,” he said. “I like it very much. I am looking forward to the second-half.”