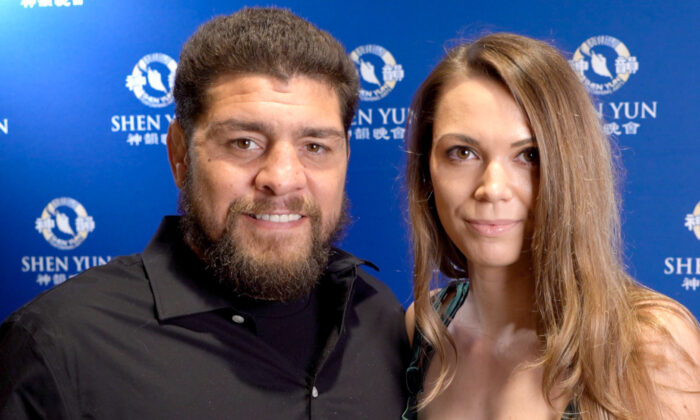 “It was nice to come here and see the show—it’s really peaceful, has a healing vibe,” he said. He added that he used to see The Nutcracker Suite every year in San Francisco, but found Shen Yun to be a different learning experience.

“My grandfather went to the Great Wall of China, and there’s pictures of him there,” Diaz said. “I always wanted to learn more about that before he passed away, and so I’m trying to learn a lot more about Chinese culture.”

Based in New York, Shen Yun brings the best of China’s 5,000 years of civilization to the world stage. Its new theme this year is “China Before Communism,” highlighting the difference between the core of Chinese culture and that of the regime that seeks to destroy it.

With colorful costumes, a live orchestra, and the graceful and expressive moments of classical Chinese dance, Shen Yun is able to bring to life myriad scenes and stories from Chinese history. Audiences often comment that the experience is both invigorating and soothing.

Diaz also felt that the experience was nourishing for his soul.

“I’ve had a really hard lifestyle that comes from really hard training and hard work,” he said. “So now that I’m older, I’m trying to find more peace in study … I learned a lot tonight and I think it was really good for me to be here.”