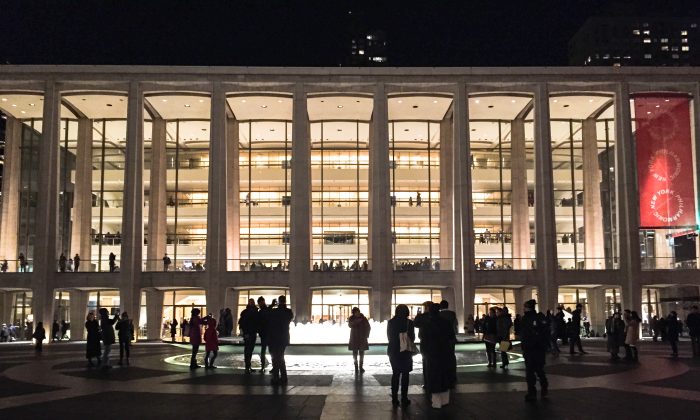 NEW YORK—Acupuncturist Julia Tortolani said she had never seen anything quite like Shen Yun Performing Arts after just watching the show about traditional Chinese culture at Lincoln Center on Wednesday night. And she “loved it.”

The New York-based classical Chinese dance company returned to Lincoln Center this month after several sold-out shows in January left some theater-goers out in the cold—clamoring for a chance to get any left over tickets.

The popularity of the world-class performers, whose mission is to revive the 5,000-year history of Chinese culture, has catapulted the company since the humble beginnings of the company in 2006.

For theatergoers like Ms. Tortolani and her friend Lea Schroeder, the myths and legends expressed through the dance pieces provide a clear understanding of just how Chinese culture used to be.

“You get this real spectrum of the Chinese culture that you don’t usually get in one show,” Ms. Tortolani said.

Since 2006, Shen Yun has gradually expanded from a single dance company to four dance companies that perform simultaneously on international stages. Audiences the world over are left in awe upon witnessing the magic of China’s divinely inspired culture.

Overall Ms. Tortolani said the performance was very profound, from the discipline and grace of the dancers to the design of the whole set, which she thought sometimes came alive and looked like a real landscape.

Through the magic of animation seen on a digital backdrop, the performers can appear as if transported from the heavens to picturesque scenes on stage.

The entire ensemble, which includes an orchestra, dancers, and vocalists, are motivated by the spiritual connection between the arts and the Buddhist and Taoist principles that are at the heart of Chinese culture, states the Shen Yun website.

Unfortunately, these principles, which instilled moral values in Chinese people for thousands of years, have been systematically destroyed by the current communist regime.

Ms. Schroeder, who works in communications for a public affairs company, was struck by the fact that Shen Yun is forbidden from performing in China.

“How beautiful it is, and yet it’s not being appreciated in the culture which created it,” she said incredulously.

Despite several attempts by the communist regime to thwart Shen Yun’s efforts to perform at numerous theaters by sending disparaging letters and other tactics, the show continues to book venues around the world.

The power of truth and reverence for the divine expressed in each performance captivates the hearts and minds of audiences. Ms. Tortolani and Ms. Schroeder got an up close view of the dancers and commented on how well the stories were told through vivid facial expressions and movements.

“I definitely noticed the facial expressions,” said Ms. Tortolani. “Even the very first time the performers came out, I noticed certain characters in their faces and how expressive they were,” she added.

Some of the mini-dramas delivered moral messages through fun story telling.

Ms. Tortolani was particularly struck by one of the dance pieces that depicted a mythical character from the classical novel “Journey to the West,” called the Monkey King. In the selected piece, the magical monkey easily lifts a giant pillar.

“It was so dramatic the way the Monkey King could make it look heavy and then lift it up like a feather,” she said. “The facial expressions or the body that communicates the emotions, it’s really profound.”

The characters that appeared throughout the show expressed different emotions from joy to sorrow. Ms. Schroeder marveled at the consistency of the dancers’ faces, saying their expressions were uniform and “really vivid.”

When asked how she would describe the show to her friends, Ms. Schroeder was almost at a loss for words, but she summed it up by saying, “You should see this show if you really want to get a sense of the Chinese culture from the past and into today.”