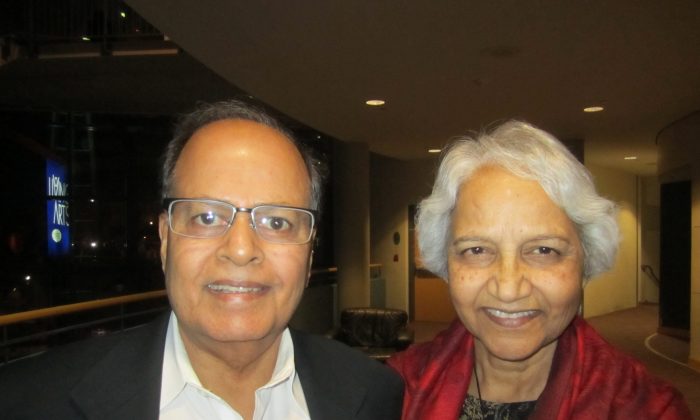 University of Alberta professor Shrawan Kumar and his wife attended Shen Yun at the Living Arts Centre on Jan. 16, 2014. The story-based dances in the performance were a lesson in Chinese history and mythology, said Dr. Kumar. (Lisa Ou/Epoch Times)

MISSISSAUGA, Canada—University of Alberta professor Shrawan Kumar was educated in traditional Chinese culture on Thursday, as he took in Shen Yun Performing Arts at the Living Arts Centre.

Dr. Kumar, a professor in physical therapy in the Faculty of Rehabilitation Medicine, attended the Jan. 16 performance and said Shen Yun’s story-based dance provided a lesson in Chinese history and mythology.

“The show itself gives us an education,” he said. “That is really good.”

He was impressed with the elements that came together to present each story—from the hundreds of handmade costumes to the high-tech digital backdrops.

“It has good techniques, good athleticism, good costumes, good colour display, good use of technology, and the visual effects are really good,” he said. “It’s a very good show.”

Virtually every facet of this culture—including its spiritual beliefs, music, and dance styles, values and traditions—have been systematically destroyed under decades of repression by the Chinese communist regime, says the Shen Yun website.

For this reason Shen Yun is not able to travel to perform in China, it says.

“My hope is that this kind of show is conducted in China itself in the near future,” he said.

“I hope that when the communism influence subsides to some degree, then the culture will arise.”

The traditional Chinese values presented in the show—such as compassion, filial piety, and righteousness—are universal, and should be revered, he added.

“It is admirable to see what kind of values are there,” he said.

“They are universal values and they’re respected everywhere and those values are thought to be good around the world.”