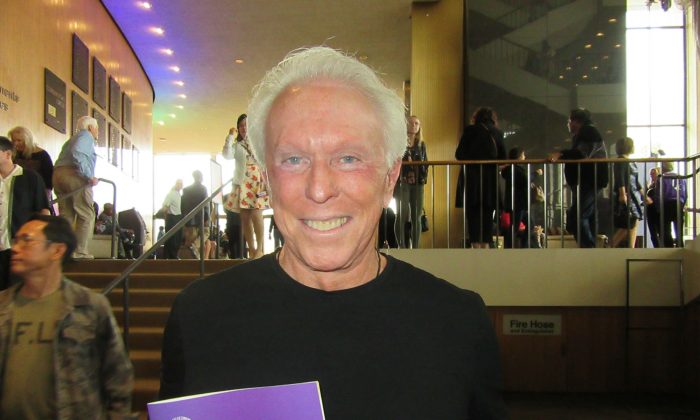 LONG BEACH, Calif.—Female dancers wearing long flowing sleeves create a 3-D artwork on stage as their delicate movements cause the colorful fabric to dance about in the air.

This is one of the classical Chinese dance vignettes featured in Shen Yun Performing Arts’s 2019 program, titled “Sleeves of the Tang Palace,” and an audience favorite.

Jim Birmingham, retired business owner, also enjoyed this program, saying when the dancers threw their sleeves out it reminded him of something he saw in an old Chinese movie.

Shen Yun Performing Arts is a top classical Chinese dance company that was founded with the aim of promoting traditional Chinese culture. The New-York based company tours the world each year to bring modern audiences a taste of 5,000 years of Chinese civilization, depicted through dance vignettes, music soloists, and stories told through dance.

Birmingham did not know much about Chinese culture before watching the performance, and his general impression of modern Chinese society was that there was a focus on making money and doing business.

Little did Birmingham know that traditional Chinese culture is so much deeper than that.

“To go back in time and see what happened long ago, and it’s a very beautiful culture,” he said.

“Now I see a totally different aspect of Chinese culture. So it’s wonderful to see that.”

Shen Yun, through its stories and songs, depicts the values and ideas lying at the heart of China’s ancient culture. Such ideas are rooted in a belief in the divine, as reflected in the teachings of Buddhism, Taoism, and Confucianism, which has endured in China for thousands of years. Values such as righteousness, propriety, loyalty, and respect were emphasized across all aspects of society to ensure people lived in harmony with each other, and with Heaven, and the Earth.

Seeing this aspect of the culture being drawn out on stage was thus an eye-opening experience for Birmingham.

“What I get most is that the Chinese people are loving, talented, very talented. And I didn’t know that they were as spiritual as what I’m seeing on the stage,” he said.

Birmingham was particularly touched by the scenes depicting events happening in today’s China concerning the persecution of people for their faith.

“When they talk about the persecution for their faith, I felt bad about that, for them, for the Chinese people,” he said.

Shen Yun includes programs portraying practitioners of spiritual discipline Falun Gong being arrested, imprisoned, and tortured in China. These scenes are based on real-life events arising from the Chinese communist regime’s persecution of the practice over the last two decades.

“And I worry about the Chinese [performers] on stage. Will anything happen to them because they are saying that,” Birmingham said.

“It’s tremendous courage, especially if they have family members back home.”

“I had no idea that was going on.”

Birmingham thought that Shen Yun’s courage in presenting these tough topics could bring a positive change to audiences around the world who may not know about what is going on in China.

“I now have a better understanding of what the everyday Chinese people go through back in China,” he said.

“I feel bad for them in a way because they can’t be who they want to be with regards to their faith. Over here faith is important to a lot of people and you are free to practice that faith. There, it’s not. And I feel bad about that.”

With reporting by Li Qingzhao.