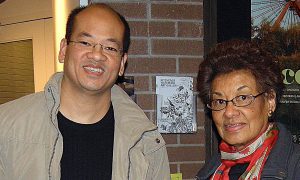 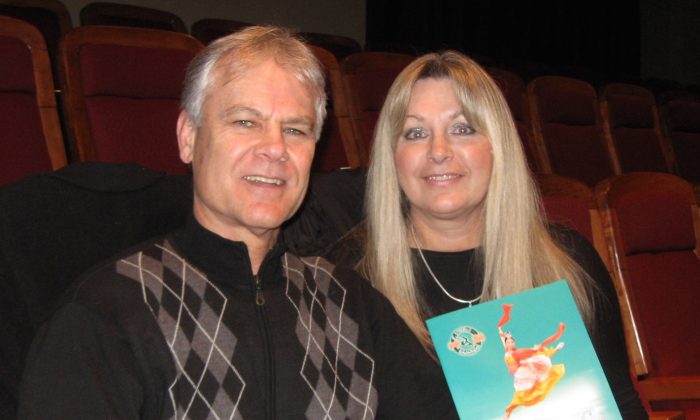 Will and Christine Lenssen enjoyed the universal values inherent in Chinese traditional culture that were depicted in the Shen Yun Performing Arts performance they attended at Centre In The Square on Dec. 31, 2014. (Quincy Yu/Epoch Times)
Company

KITCHENER, Canada—Will Lenssen is a practicing Catholic, but not the kind that envisions fire and brimstone for unbelievers. He takes a broader view on spirituality, a view that lets him find commonalities with China’s 5,000 years of divinely inspired culture.

It’s a culture that has been repressed and nearly destroyed today under 65 years of forced atheism and communist rule in China. Now, a group of top artists from around the world are working to revive it. On Tuesday in Kitchener, Mr. Lenssen saw that group, Shen Yun Performing Arts, take the stage at the Centre In The Square theatre.

‘Values do not have borders’

He pointed to a dance called The Fable of the Magic Brush as an example of the universal values in Shen Yun.

In a seaside village a young man defends a mysterious maiden from a band of ruffians and she gifts him with a magical brush that turns anything it paints into reality. Then she flies away and assumes her true form, a silver dragon of the sea. He promptly paints a granary full of rice for his village to eat.

But the ruffians return and steal the brush. Unfortunately for them, it won’t obey an impure heart.

Mr. Lenssen noted that the story showed how a good person was helped and supported.

“The dragon of the water was helping the man that was promoting good and gave him support. Same thing with the paintbrush—what the paintbrush was expressing was good, and although people tried to dominate and take advantage of it, it would not comply with anything that was bad,” he said.

“So all the themes there were depicting those kinds of positive elements: dignity, respect, integrity.”

Another example was The Power of Compassion, a tale of modern-day China in which a group of Falun Dafa meditators enjoy still-peaceful days before persecution of the practice erupts. When police attack the meditators an officer slips and hurts his knee, and the man he was attempting to arrest stops trying to flee and helps the resistant officer.

For Mr. Lenssen, the piece demonstrated that some values are universal.

“That to me, as a Catholic, was [being] Christ-like to others. So we have a value system that is pervasive,” he said.

“We have what I would call almost a fifth or a sixth sense of spirituality that has a common fibre.”

Compassion and all the values do not have borders.
— Will Lenssen, founder and principal of a provincially accredited online high school
The audience also picked up on it, he said, noting their quiet, contemplative reaction.

“They can identify with it. Compassion and all the values do not have borders.”

Despite that universal goodness, Shen Yun has yet to stage a performance in the land that inspired it. That’s because Shen Yun was founded on a mission to revive China’s divinely inspired civilization, a cultural heritage that has been systematically destroyed under the current authoritarian regime.

“Forcing atheism upon society, the Chinese Communist Party has for decades launched various campaigns—most notably the Cultural Revolution—to destroy not only cultural sites, temples, and relics, but also the Chinese people’s belief in virtue and faith in the divine,” explains Shen Yun’s website.

“They actually stated on stage that the people could not perform these presently in China today. I was floored by that,” said Mr. Lenssen.

Then again, he said, it wasn’t all that shocking given the recent democratic protests in Hong Kong.

“This allows us to see what many of the Chinese people might want to express but can’t. So I would love to see this go on tour there so that the Chinese people can identify with free thought. And it is beautiful and calming too. It’s not, like, ruthless, brutal—it’s very calming.”

“It is very interesting how the culture has been suppressed, and I think this is the way to bring it out and make it known to everyone,” she said.

She said the performance also revealed a connection between the people and their space.

“Hopefully it will rub off on someone else.”

Mr. Lenssen said that the themes might have been serious, but they were handled with class.

“There’s no profanity, there’s no brutality. There’s signs of what is good, what is bad, but it doesn’t carry it to the extreme and you still get the message without being offended by it. Very nice, very nicely done, very gracious I would say,” he said.