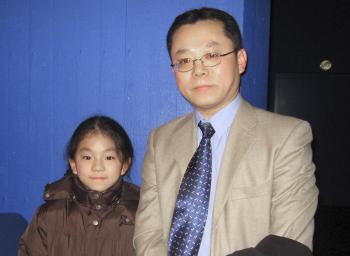 ‘I feel my mind has been cleansed and deeply touched’

AARHUS, Denmark—The final show by the artists belonging to the Shen Yun Performing Arts Company at the Musikhuset in Aarhus was as successful as the first performance and all performances throughout the world.

Many in the audience were astounded by the deep implications in the different scenes and learned much about Chinese folklore handed down over China's 5,000-year history. They were deeply touched by the tales of courage of a group of Chinese people inhumanly persecuted by China's regime today.

The music, played by a live orchestra composed of Western and Chinese instruments, elicited much joy from the audience.

Mr. Wang who is employed in an American joint venture in Aarhus came to the show with his daughter. He expressed the feelings the show brought forth in his heart.

“I feel my mind has been cleaned and deeply touched. If Buddha nature and evil character coexists in human beings, this Shen Yun show just woke up the remnants of the Buddha nature left in my heart. The show, from the beginning to the end, is overwhelmingly touching. I am 49-years-old, and today is the first time I've ever seen such a moving performance.”

Mr. Wang’s eyes filled with tears when he spoke about how the performance affected him.

The songs, the dances, the music, and the overall design of the scenes, enhanced by the 3-D backdrop, made a deep impression on the audience, including Mr. Wang.

"Though I am not an expert in arts, I can sense the difference in performing arts, which the Shen Yun show conveyed. The performance, the costumes, color arrangements, and everything else [I see with my eyes, hear with my ears, and feel in my heart] are wonderful and beautiful.

”I feel as if I'm a part of the performance, immersed in the scenes, and really have the feeling that gods and humanity coexist. Many thanks to Shen Yun for performing in Aarhus, and I do hope they can come to Denmark every year.”