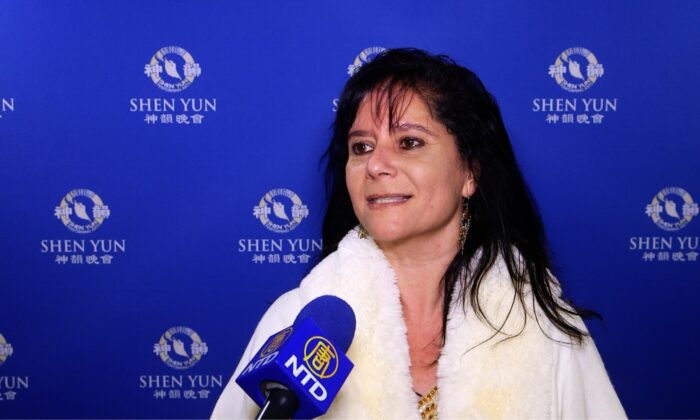 ESCONDIDO, Calif.—Theater is an age-old medium that provides outward, as well as inner, experiences. But today’s fast-paced modern world busies our brains with intruding thoughts which can make it hard to completely take in an evening-length show, even one as colorful and world-renowned as Shen Yun Performing Arts.

That’s where talk show host Anna Leah Mintz’s advice for seeing Shen Yun comes in handy. She found the classical Chinese dance performance to be “breathtaking and priceless” and felt it was an important experience for her teenage daughter when they attended on Jan. 18, 2020, at Escondido’s California Center for the Arts.

“I feel [Shen Yun] was therapeutic, there’s good therapy in there. And you know the secret of watching a show like this, is to not have your mind be busy, to really sit there in the audience and feel it, be mindful, be right there at the moment and feel the music and feel the movements, and that’s how you get the real deal out of it. … And I, my mind drifted a little bit, but I caught myself and I came right back to the moment, and I felt it again and it felt great. If you could just learn to let go and let the music sink into you, that’s the key.”

Mintz’s talk show centers on holistic health, but her first love was with the theater.

“My [university] major is drama in education, so I can more than appreciate this. They are so utterly professional … The performers were unbelievable, the choreography was so unbelievable. You could tell how much rehearsal had to go into that and I would appreciate it because … I know what it takes to do it just right. And they were spot-on: everybody, every flip, every landing, was perfect, perfect. So I applaud them, honestly,” Mintz said.

New York-based Shen Yun’s mission is to revive authentic Chinese culture, including the traditions and beliefs that civilization has thrived on since time immemorial. Through ancient art forms such as classical Chinese dance, originally-composed orchestral music, singing, and costume, Shen Yun is able to convey deep emotions and even divine themes in its performance.

“It was so unique and there’s such culture behind it, and the story behind it. It all just made sense and I felt it was very important to bring my 15-year-old daughter,” Mintz said. “Culture is important. And just to see the colors, the scenery, all that put together was just breathtaking and priceless. Honestly, it was a real cool experience.”

Shen Yun’s mission of reviving traditions is shunned by the Chinese Communist Party in China, which has sought to systematically destroy spiritual beliefs and persecute their followers. Mintz was saddened by this turn of events and hoped Shen Yun would be able to perform in the homeland of its cultural origin one day.

About China’s divinely-inspired culture, Mintz said, “they really expressed it. It’s a pity they can’t do this in China, and so for them to bring it here and be able to really bring it to us, for us to not have to read books about what they go through, it was really nice. It was just a true experience of history and culture all mixed in one two-hour show. Hard to believe it was all in two hours.”

The meaning of “Shen Yun” in Chinese is “the beauty of divine beings dancing,” and Mintz could feel that beauty and divinity.

“There’s a message and a mission for everybody on this earth. And these guys [Shen Yun] did their mission to bring China here, and you know, what’s going on there. And my mission I feel is to bring good health and education to educate people to stay healthy, so that’s what I’m all about. So I really connected with all this.”

“There’s definitely a beauty behind the divine,” she continued. “I’m very spiritual, so to me, I feel God all the time. I loved it when the performers tonight brought the person in from Heaven,” Mintz said, referring to the Creator who, according to legend, originally brought China’s divine culture to earth, and is depicted on stage in Shen Yun.

“I believe it’s very possible the world will be saved. I mean this world needs help in many ways, as you can see. I mean just the fact that we can’t have this show in China for whatever reason,” Mintz added.