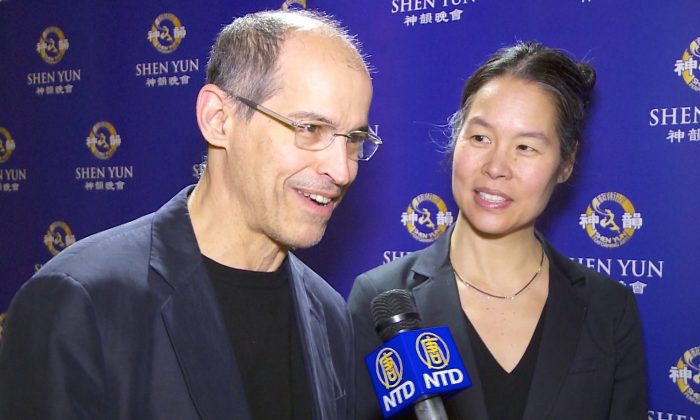 NEW YORK—Diana Pan, a professional ballet dancer, was full of admiration when she attended Shen Yun Performing Arts at the David H. Koch Theater at Lincoln Center on Jan. 11.

“I’ve danced ballet for most of my life and I’ve enjoy the fluidity of the dancing and the movement; it’s different from ballet, but it requires so much strength and discipline. It was beautiful,” she said.

Compared to ballet, classical Chinese dance is different, says Mrs. Pan: “It requires similar technique, but the Chinese dancing is the movement of the arms, the use of the costumes, it’s very, very different.”

Classical Chinese dance combines graceful moves with more dramatic leaps and tumbling techniques. “It is able to transcend ethnic, cultural, and even linguistic barriers, taking this well-established Chinese culture and presenting its essence to the world,” according to the Shen Yun website. “Classical Chinese dance has a long history of thousands of years, passed down continuously within the imperial palace and ancient Chinese theater and opera. Soaking up profound wisdom from every era and dynasty, it has become a complete system of dance embodying traditional aesthetic principles with its unique dance movements, rhythms, and inner meaning.”

Myron Schwartz, Mrs. Pan’s husband appreciated the opportunity to learn about Chinese culture, having married into a Chinese family.

Shen Yun’s story-based dances, such as Monkey King and the Skeleton Demon, from the classical literary work Journey to the West, recount the legends of the ancient Chinese civilization and “convey a message or moral that is still relevant in our day,” according to the Shen Yun website.

Mr. Schwartz commented that the depiction of contemporary scenes in China was a good to see, along with the history. The ancient Chinese culture has been all but lost under 60-plus years of communist rule. The Shen Yun website explains: “The company’s mission is to use performing arts to revive the essence of Chinese culture—traditionally considered a divinely inspired civilization. Since the CCP is officially an atheist regime, it is afraid of the freedom of expression this arts company enjoys in the West.”

Shen Yun is not allowed in China, though it travels the rest of the world.

John Browne, a retired lieutenant from the New York City Police Department also appreciated learning more about Chinese culture since he married into a Chinese family.

“There’s a whole lot more depth to the culture. And it’s just inspiring to see it,” he said.

He also liked the fact Shen Yun puts an emphasis on freedom of expression in scenes like The Power of Compassion. Based on true events in modern China, this story depicts peaceful meditators of the Falun Gong spiritual discipline who are suddenly attacked by communist police and severely beaten.

But when an officer hurts his knee during the attack, the Falun Gong practitioners actually stop trying to flee and help the resistant officer. Moved by this compassion, the officer comes to regret his actions, leading to an unexpected blessing.

“I was impressed with the emphasis on the freedom of expression, because people take it for granted,” Mr. Brown said. “It’s nice to see that someone is doing this on behalf of the Chinese.”

He appreciated the peaceful resistance against communist oppression, because his father-in-law actually fought against Mao Zedong and had to flee China when he was only 14 years old.

“[He] just got on a ship, didn’t know where he was going, with his mother. And the mother died en route. You know, people do a lot for their freedom, and I’m glad to see this here, especially in New York.”