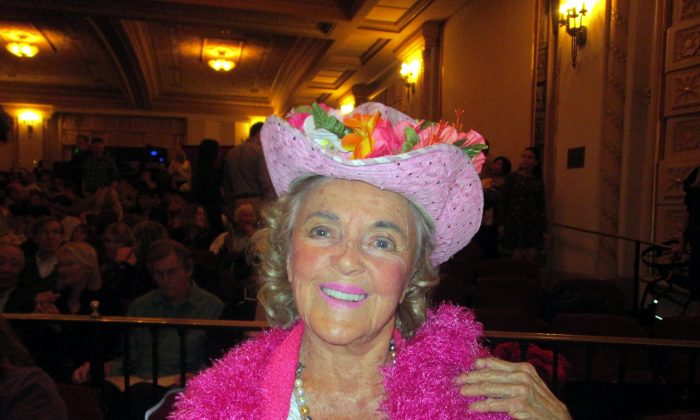 Doctor Patricia Bragg, nutritionist to the stars and worldwide lecturer, after watching Shen Yun Performing Arts at the Granada Theater in Santa Barbara on April 30, 2016. (Courtesy of NTD Television)

SANTA BARBARA, Calif.—Sitting in the front section of the Granada Theatre and with binoculars, Patricia Bragg was delighted to see the details on the stage, especially the faces of the Shen Yun Performing Arts dancers. “They all had perfect postures and perfect faces! It was beautiful. Beautiful. Beautiful!” she said.

Ms. Patricia Bragg is known as a nutritionist, an author, a dynamic Health Crusader, a lecturer, a health educator and fitness adviser to world leaders and Hollywood stars such as Clint Eastwood, Katy Perry, the Beach Boys. She is the daughter of Paul C. Bragg, father of the Health Movement in America and the originator of health food stores in 1912.

This aspect of her life gave her a unique appreciation for Shen Yun’s revival of 5,000 years of civilization.

“I loved it. I believe China pioneered in herbals, acupuncture, and natural health movements,” Ms. Bragg said after the April 30 performance.

With regard to the Shen Yun dancers, Ms. Bragg thought “they showed the beautiful music and dancing and good posture, they all look extremely healthy and fit. I feel that China could be the answer to bring peace to the world with this show.”

Messages to Save the World

Ms. Bragg was particularly moved by the spiritual messages she perceived through classical Chinese dance and music, Shen Yun’s hallmark. Established in 2006 in New York, Shen Yun has the mission to revive the 5,000 years of traditional Chinese culture.

Ms. Bragg said she believes that the traditional Chinese culture “could bring peace to the world with their teachings of the earth and nature.”

Some of this was articulated through the bel canto solo vocalists’ lyrics, sung in Chinese, which she was thrilled to hear. “I believe that the singer with the words that he gave out to all of us were very precious and can save the world.”

Ms. Bragg said she saw peace in their faces, and healthy and fit bodies and minds.

Ms. Bragg teaches good posture as well, and thought the Shen Yun dancers have great postures. “I love the dancing and the beautiful rhythm, the 640 muscles put to beautiful use that thrilled the audience.”

“I believe in good postures. I believe you are what you eat, breath, drink, think, say, and do with your body, your soul, your heart, and your mind. It was beautiful. I loved the Mongolian dancing. They were so limber and agile.”

‘Shen Yun could make a great impact on the world’

Knowing that Shen Yun Performing Arts has four equally sized groups traveling simultaneously around the world presenting authentic Chinese traditional culture, Ms. Bragg said, “I’ve made 30 world crusades myself, in actually almost every city in the world. I feel this is very important. I believe that Shen Yun could make a great impact on the world. … It gives you an entirely different picture of China. It could bring health with the Chinese teachings, and peace to the world.”