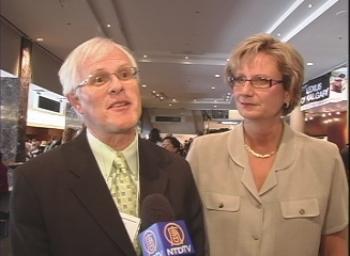 Former School Principal: ‘They are not just dancing, they are living a story’

CALGARY, Alberta—Shen Yun Performing Arts, a dance and theatre company that has taken the world by storm, opened at Calgary’s Jubilee Auditorium on Easter Sunday afternoon and touched the hearts of the audience members.

Mr. Brignall, director of information systems for a financial company, came to experience an afternoon of classical Chinese dance, music, and storytelling. He was accompanied by Mrs. Brignall, former principal of an elementary school.

Having a background in technology, Mr. Brignall was particularly impressed with the digital backdrops, a trademark of Shen Yun that uses modern technology to help tell ancient and modern stories.

Mrs. Brignall commented on the overall ability of Shen Yun to express ancient Chinese stories using a variety of methods such as costuming, music, special effects, and dancing.

“It’s beautiful. That coordination, the technology and how you see them coming out of the [backdrop] and coming down, and all of a sudden they are on stage. It helps tell the story. It’s fabulous. The material of the costumes is beautiful, it just flows; beautiful colors,” she said.

Mrs. Brignall was also impressed by the professionalism of the live orchestra, which stayed perfectly harmonized with the dancers’ movements.

“Everybody is so in sync. It’s blended beautifully. It’s hard to describe.”

Mr. Brignall described the dancing as “phenomenal” and was inspired by how the traditional drumming “gives you a real sense of involvement,” the drummers enticing the audience with their powerful energy.

“You feel almost part of it as you are watching the drummers on the stage. It is a really interesting, adrenaline-pushing type of thing,” he said.

He also experienced this “sense of involvement” during [Heaven Awaits Us Despite Persecution] in which a father is persecuted for practicing the traditional spiritual discipline of Falun Dafa, which was outlawed in China in 1999.

“The little girl is very good. … The little girl within the family when the father was arrested … Again, you become one of the characters, you feel the empathy for them, especially in their pain at that point.”

Mrs. Brignall felt touched by the way the dancers expressed their inner beliefs through their movements.

“I think the stories and the expressions, the mix of the old and the new, and the culture and the passion they have, and the belief they have—you can feel it in their faces and expressions as well as their music. … They are so involved in the dance. They are not just dancing—they are living a story and you can feel that.” she said.

After Calgary, Shen Yun will perform in Edmonton April 15 and April 16 and in Regina April 19.