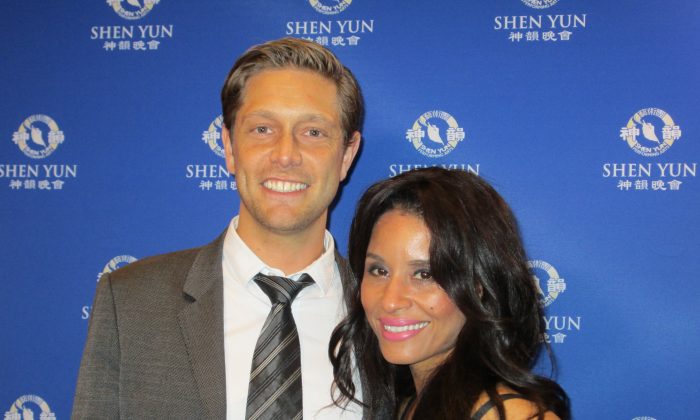 LONG BEACH, Calif.—A very special music and dance performance has captured the timeless battle between good and evil, according to recording artist and composer Rick VanderKleijn and his wife Kimberly Moore, founder of the Kimberly Moore Foundation, who attended the Terrace Theater on Sunday, March 20.

“This performance really showed goodness and tried to bring light in the darkness, which is very beautiful,” said Mr. VanderKleijn.

“Everything together was just kind of really uplifting,” said Ms. Moore. “It just takes you to, almost like a whole other dimension, every single time.”

The performance the couple was referring to is Shen Yun Performing Arts, founded in New York in 2006 to revive the divinely-inspired culture of China.

As a musician, Mr. VanderKleijn couldn’t help but notice the caliber of Shen Yun’s live orchestra, with both Chinese and Western instruments and musical traditions accompanying the performance.

“I was very, very amazed by the music and the conductor and the orchestra. It was fantastic,” he said. “I was actually just being mesmerized by the sound quality and the dance and how everything is so in sync and how the sound is so clear.”

Mrs. Moore, whose foundation has answered letters and brought gifts to children in need since 2007, said everything about Shen Yun was an inspiration.

“The performance was extraordinary,” she said. “I found it really beautiful and touching and invigorating, also very peaceful at the same time.”

Chinese classical dance, with a history of thousands of years, is the focus of a Shen Yun performance. Each dance vignette conveys a theme or tells a story from Chinese history and legends, with ethnic dances and musical soloists interspersed.

“I actually love how stories are being told with music and dance,” said Mr. VanderKleijn. “The dancers are amazing. …The first thing that I noticed is that how hard everybody that’s involved in this show had to practice.”

Mr. VanderKleijn was also impressed by the visual effects on the projected backdrop.

“What I love the most is the screen goes black and a new set comes up, and the colors and a new stage has been created,” he said. “It’s very beautiful.”

Shen Yun also addresses modern Chinese history and the repression and persecution of the spiritual group Falun Gong, which was very touching to Mr. VanderKleijn. “I felt truth, sadness and emotion,” he said.

Mr. VanderKleijn noticed a clear theme of “the constant, continuous battle between the good and bad, and light and dark” within the music, dancing, even the costumes and the entire performance. He said he would “absolutely” come see Shen Yun again and would recommend the show to everyone.

“If you like amazing music…and you want to know more about the Asian culture, the Chinese culture, definitely go,” he said. “It’s entertaining, it teaches you something about history, and it’s beautiful.”

Ms. Moore said she hoped to bring more young people to the performance.

“Because I work with underprivileged children in the community, it would be so incredible to take these kids to see a performance like this and introduce them to this beautiful artistic culture,” she said.