Shen Yun Brings Forth Feelings of Peacefulness and Serenity 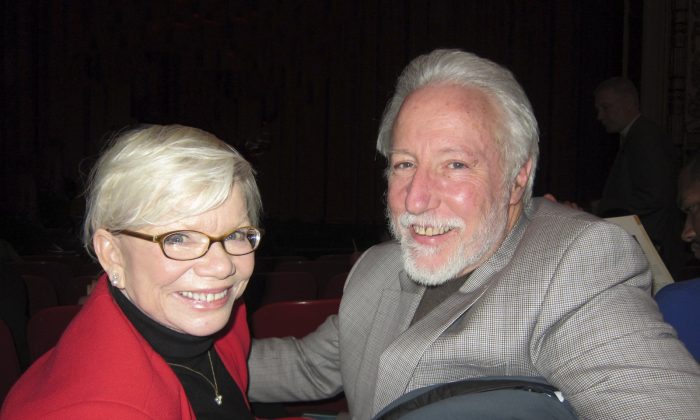 CHICAGO—Uplifting, peaceful, relaxing, and energizing are just a few descriptors used by several audience members to describe how the premier classical Chinese dance and music company, Shen Yun Performing Arts, made them feel.

They attended the first of four performances at the Cadillac Palace Theater that run from March 6-8.

“It’s really been a delight,” said Hendricks Brown, PHD, during intermission. “It’s been really uplifting, energizing, and thoughtful as well.” Dr. Brown is a professor in the Departments of Psychiatry, Behavioral Sciences, and Preventive Medicine at Northwestern University, Feinberg School of Medicine.

“I expected it would be just a really wonderful show, and it is,” he said.

“I loved it,” said his wife, Dr. Kathy Cervenka, who is a retired psychoanalyst. “I am enjoying it immensely.” She felt it was exciting, happy, and sad at the same time. “All of the performances were just brilliant,” she said.

Dr. Cervenka said that she adores dance and anything involving dance. “It is wonderful. I am going to tell everyone about it,” she said.

“It’s just a wonderful exhibit of 5,000 years of a culture that we don’t really know as much about as we should. So there is a lot of lessons in here,” said Dr. Brown.

He explained, “There are levels of philosophy that we don’t get much contact [with] here in the West. I also thought that there were really some real clever combinations of Eastern and Western culture, particularly through the music.”

Shen Yun Performing Arts’ Orchestra combines the power of the Western orchestra with traditional Chinese instruments such as the erhu and pipa.

“It is like water. It is very smooth, the colors are beautiful [and] the choreography is magnificent,” said Sheila Miles. The experience made her relaxed. And as a nurse, it’s a feeling she desperately seeks.

Sahar Halabi, a Chicago physician specializing in critical care, pulmonary and sleep disorders, said, “From an artistic point of view, it’s absolutely fabulous. The music, the choreography, and the incorporation of technology was absolutely amazing.”

“Shen Yun’s mission,” according to the Shen Yun website, “… is to revitalize a culture that was almost completely destroyed by systematic campaigns of the Chinese communist party, particularly the Cultural Revolution.”

“The bottom line is that civilization in all sorts of forms, shapes, and outlets should not be suppressed. So reviving any sort of expression should not be oppressed,” said Dr. Halabi. She believes this to be true for other cultures as well.

Both Suzanne Costello and eighth-grade daughter, Elyse, found Shen Yun to be educational. Ms. Costello is a vice-president and senior consultant for Lockton Companies.

“It’s beautifully expressed in the dance movements. It brings out a feeling of peacefulness and serenity. I just think it is well done,” said Ms. Costello.

She described the costumes as colorful and some of them even looked like flowers. “They are very, very artistic. It’s very beautiful.”

In addition to that she felt that restoring the traditional culture of China is such a great idea. Shen Yun is  “… bringing culture that a lot of people don’t know about. It is really sad that they can’t perform it in their own country. It’s a great way to bring awareness,” she said.

‘It took me out of this world’

For William Rosario, Shen Yun made him feel relaxed and peaceful. “It took me out of this world. I forgot about everything else. Something I never do,” he said.

Mr. Rosario said that he loved the performance and would like to bring the whole family. He would say on Facebook: “You got to see it. It’s a great piece of art,” he concluded.