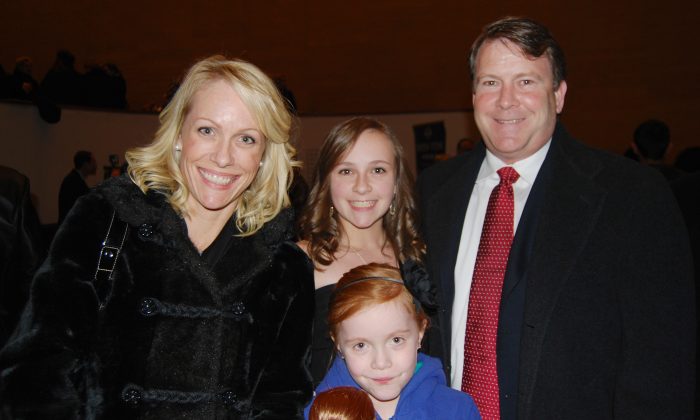 Stephen and Jill Adolph and their daughters at the opening performance of Shen Yun Performing Arts at the Jones Hall for the Performing Arts in Houston on Dec. 23, 2013. (Catherine Yang/Epoch Times)

HOUSTON—Stephen Adolph, flight director and chief pilot at a private company, grew up with Chinese culture and felt the holidays was the perfect time to share it with his family through Shen Yun Performing Arts at the Jones Hall for the Performing Arts in Houston, Dec. 23.

“That there is a lot of culture and a lot history…it was quiet impressive,” said Mr. Adolph, who attended the performance with his wife Jill and two young daughters who are involved in theater, as well as his parents.

New York-based Shen Yun has for eight years now brought 5,000 years of Chinese civilization to life through the universal language of music and dance. This year, Shen Yun has four full companies touring the globe, taking audiences on a journey through the Chinese culture.

“It’s something we shouldn’t lose. We shouldn’t lose the culture of china and the beauty of it,” Ms. Adolph said. “So much of our cultures come from it.”

An integral part of Shen Yun’s performances is classical Chinese dance, which has been passed down through the generations in China, constantly being refined to develop into the vast and distinctly Chinese dance form we know today, according to the Shen Yun website.

“Classical Chinese dance has its own set of training methods in basic skills and has strict training in both physical expression and specific postures,” the Shen Yun website explains. “Known for its incredible flips and spins, and its gentle elegance, it is one of the most rigorous and expressive art forms in the world.”