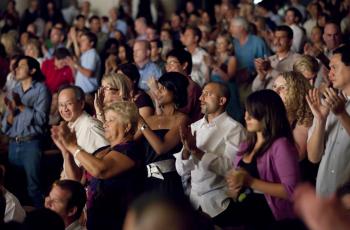 BY Jane Andrews TIMEAugust 8, 2010 PRINT
AUSTIN, Texas—Bill Atcenhoffer, a major ATM business owner in Austin, was at the Long Center for the Performing Arts on Saturday afternoon, Aug. 7, to watch the classical Chinese dance and music presented by Shen Yun Performing Arts.

Mr. Atcenhoffer was impressed by the performance. “I thought the dancing was exceptional. … Very elegant, very flowing, very sweet. I enjoyed it," he said.

“I learned a lot about the persecution in China and it was kind of neat that this show could be held here, but couldn't be held back in China. So, I enjoyed it very much,” he said.

According to its website, the New York-based company is independent of China’s communist regime and seeks to revive the true, five-millennia-old artistic tradition of China that thrived before decades of suppression by the Chinese regime.

Shen Yun includes in its repertoire story-based dances depicting legends from ancient China all the way through to modern times, as well as folk dances from many regions throughout China, something Mr. Atcenhoffer enjoyed.

“It's telling a story, each dance, there was a lot of story-telling,” Mr. Atcenhoffer expressed, adding that he also enjoyed the soothing notes of the accompanying orchestral music.

"Generally the music is very calming. Remember the one with the tiger [Wu Song Battles the Tiger] and he was drunk and took a nap, that's what it makes me want to do, take a nap."

On the other scale, he was particularly excited by the dance Splitting the Mountain.

In this Chinese folk tale, a wandering scholar becomes entranced by a beautiful goddess and he convinces her to stay with him on earth. They marry and have a son but by the goddess' older brother is furious at their union and imprisons his sister inside a mountain.

With reporting by Jason Wang.