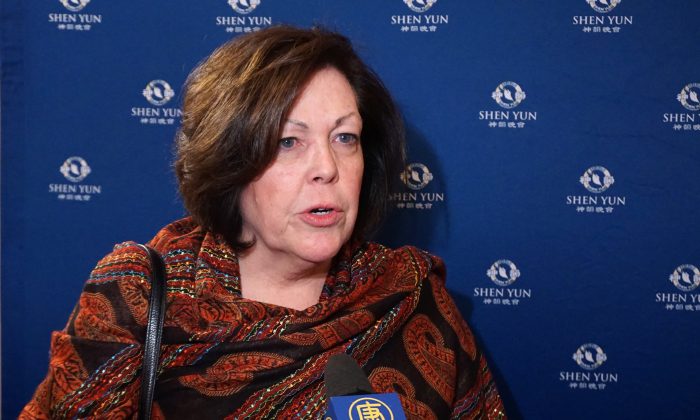 Mrs. Theresa White believes that people will "just feel uplifted by the beautiful colors and sounds that you encounter throughout the evening" in Shen Yun. At the Kennedy Center Opera House on Feb. 18, 2016. (Courtesy of NTD Television)

WASHINGTON, D.C.—Art can represent the best of a culture to people who aren’t familiar with it. It’s a way for a country to put on its best clothes. “It’s the first line of making friendship around the world and increasing understanding,” said Theresa white, who has experienced the field of diplomacy for most of her life.

It’s wonderful for a culture to share its art, she said, because “we all respond to what’s beautiful in life.”

Mrs. White, a teacher, saw New York-based Shen Yun Performing Arts, an expression of China’s age-old traditional culture with her daughter. Not with them at the Kennedy Center Opera House on Feb. 18, was husband and father, Mr. White, a diplomat working in another country at the moment.

Mrs. White feels Shen Yun’s performance would be wonderful for anyone. People will “just feel uplifted by the beautiful colors and sounds that you encounter throughout the evening,” she said. The Washington audience seemed to think so, giving the performance an uproarious standing ovation at the end.

Shen Yun showcases various traditional Chinese instruments, included in the primarily Western orchestra. Learning about these instruments and Chinese music was a highlight for Mrs. White.

She had also learned a little bit of Chinese history by watching 20 short programs, most of them dances, depicting snippets of the country’s storied past, or telling legends to communicate the essence of Chinese culture as it once was.

In addition to traveling back in time, Shen Yun presents folk dances that show the breadth of the culture, boasting more than 50 ethnic groups.

Mrs. White would prefer learning about people, she said, through their culture’s beauty, learning first to appreciate who they are rather than meeting them through problems.

“This was an example of what we can do with one another—appreciate what each other has to offer this world and appreciate our historical parts and the stories we have in our own individual cultures. I think it just helps with understanding,” she said.

The family has lived all over the world and experienced many cultures: South America, Africa, and Europe. Since her husband was traveling, she brought her daughter: “We’re having a girls’ night out. So we celebrated—he’s enjoying another country right now and so we came to China,” she said with a laugh.