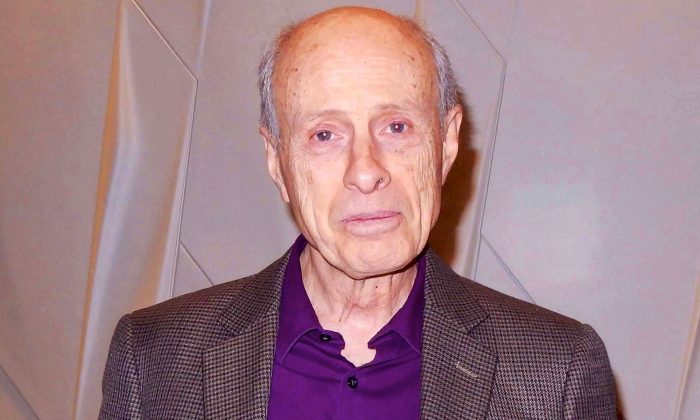 Jim Crill at Shen Yun Performing Arts on March 15 at Tobin Center for The Performing Arts. To Mr. Crill, the dance and music, and colors of Shen Yun were like “a spiritual transfusion.” (Stacey Chen/Epoch Times)

SAN ANTONIO—Former entertainment producer Mr. Jim Crill found the experience of Shen Yun deeply nourishing. “This is my third time to see the show. And I went into tears immediately when it opened up because the beauty and the heart of the performers touched me so profoundly,” said Mr. Crill, after watching Shen Yun on March 15 at Tobin Center for The Performing Arts.

He missed the 2014 performance. He felt deprived. “I missed it last year, and I really missed it, it hurt me, it hurt me, and I knew it. It’s like I didn’t get what I needed to sustain myself for another year. And the very first time I saw it, I said ‘it’s the quintessential art form of love.'”

The name Shen Yun means the beauty of divine beings dancing, according to the Shen Yun website.

To Mr. Crill, the dance and music, and colors of Shen Yun were like “a spiritual transfusion.”

Mr. Crill said he has a deep respect for the Shen Yun artists: “These are people beyond measure.”

The precision and unity of the classical Chinese dancers in Shen Yun moved him. “They do it beyond perfect every day. It’s like seeing one person; they meld together as one,” he said.

According to the program, “within classical Chinese dance lie China’s rich cultural traditions, which allow its movements to be deeply expressive.”

Mr. Crill noted that quality. Speaking of the female dancers, he said, “It was like watching a flower. Flowers have very many colors within one flower, and the flowers kept coming out, the clothing and the women’s faces, and things like that.”

The male dancers expressed their own kind of beauty. “And the men, the same thing: they come out, and they don’t have to show other than their beauty, the raw, the real beauty. The beauty of the heart and the mind, and the spirit … that’s what flows from the Shen Yun performers.”

“How they can sustain the energy and the look, that glorious look on their face just awes me, awes me throughout the whole performance, and that’s hard work,” said Mr. Crill.

He felt grateful for the effort and sacrifice the artists put in to create such beauty.

“When they move, it’s like one person. You can’t do that … without something, and that something is a gift.

Mr. Crill hoped they were well taken care of: “Do they get to eat real well? I don’t know. I hope so.”

Shen Yun creates an entirely new program of dances and music each year, and travels around the world to perform, according to the program. “Months of effort, and of course a little inspiration, are now before you. Our hope is that you will leave the theater today feeling uplifted and renewed.”

Mr. Crill was able to fulfill their hope. “For me, for seeing it a third time, it impacted me like I have never seen it before, but it went deeper; the tears are not tears of sadness. It’s tears of humbleness, of caring, of empathy for performers, and it’s the spirit that keeps them unified.”

The program is unique, according to Mr. Crill. “Shen Yun is the only thing in the world I know right now that’s promoting one thing through beauty, through art form, and love.”

The mission of Shen Yun is to revive authentic Chinese culture. In the program, it invites audience members to “Prepare to enter a magical realm of beauty and purity, a place where goodness always prevails and legends come to life.”

Mr. Crill entered that world. He said, “I see God’s love flowing through the performers, and choreographer, and musicians, and they are in sync.”

Being a musician, Mr. Crill said that combining Western and Eastern instruments and making it work is not an easy task.

He felt that on a deeper level Shen Yun brings salvation to people. “Shen Yun is the only art form I know that’s God driven, spirit driven,” he said.

He felt he wanted to tell the world about it: “I wish I can go on CNN and FOX and talk about Shen Yun. Shen Yun can change children’s lives forever.”