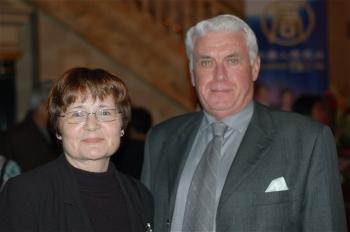 TORONTO—Only one word could sum up Shen Yun Peforming Arts according to a couple who atteneded the dance company's Saturday night show at the Canon Theatre.

"Spectacular, There is really no other way to describe it," echoed his date, Ms. White, a new drug researcher. "We have never seen anything like this before.”

"The symmetry, the sets were amazing, the training—it is just superb. The outfits are spectacular," said Mr. Pinkney.

"Being all in Chinese it is really nice how they MC’d the translation of both languages [Chinese and English]. I think the introduction of each scene is great, helping us to understand what the performers are trying to express on the stage.," said Ms. White.

The couple was speaking during intermission but were already planning for the next time Shen Yun came to Toronto.

"Everybody should see it … If they [Shen Yun] come again we will definitely come back for sure," Ms. White said.

"And we will be bringing friends with us as well. This is spectacular, it really is. It’s unbelievable! The singing, even though we don’t understand it, it is so emotional that you just sit there transfixed, you really do," said Mr. Pinkney.

Although the vocal performances are in Chinese, the lyrics are projected onto an animated backdrop along with their English translation.

The pair expects Shen Yun will continue to grow as more people come to see it and tell others of their experience.

Since Shen Yun began in 2006, it has grown from one to three dance companies which toured over 100 cities in 20 countries in 2009. Next year, Shen Yun will perform before a projected audience of over one million people.

"We go to the theatre a lot. We went last night. But this is the first time for this," Ms. White said.

"We both absolutely love live theatre. No matter where we are or where we vacation, we just try to go to any live theatre that there is. … This is just spectacular," said Mr. Pinkney.

Shen Yun Performing Arts will present one final show in Toronto on Sunday before departing for the year. The company is expected back in 2010 with its all-new world tour. For more information visit www.ShenYunPerformingArts.org.