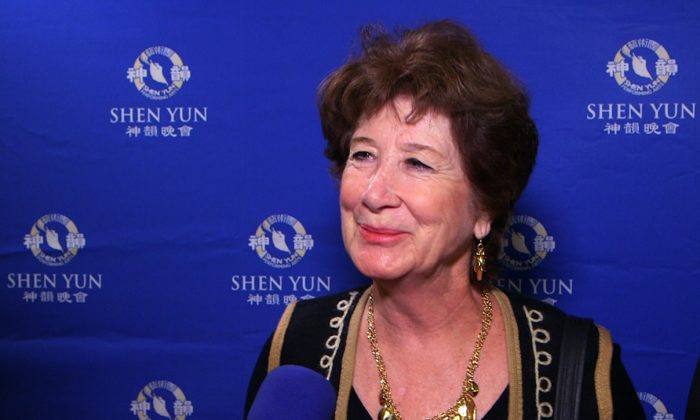 Ardeleen Vealitzek at Shen Yun’s Jan. 26, 2016 performance at the California Center for the Arts. (NTD Television)

ESCONDIDO, Calif—Ardeleen Vealitzek expected to see an authentic display of Chinese culture. And yet, when she went to see Shen Yun, she experienced much more than skillful dance, exquisite music, and ancient storytelling.

“I enjoyed learning about the origins of life, the mysticism, the belief in God that people have innately; the common thread—a belief of a creator that comes through ancient times to today,” she said after the performance at the California Center for the Arts on Jan.26.

For thousands of years, the Chinese called their country the “Divine Land” (“Shen Zhou” in Chinese) and the teachings of Buddhism, Taoism, and Confucianism were the heart of the culture. It was believed that the arts were given to humankind as a way to bring some of the divine to Earth.

I love the culture, the strength, and the vibrancy that comes through.
— Ardeleen Vealitzek

From the beginning of the performance to the end, the divine’s hand in human affairs is acknowledged. Each of the evening’s individual songs or dances highlights some cherished value of traditional Chinese culture—compassion, loyalty, kindness, or bravery—often by telling a story, sometimes through the singing of award-winning vocalists.

Ms. Vealitzek thinks the tradition of spirituality in China continues in the form of the meditation practice Falun Dafa: The belief “has never died and continues to grow, in spite of the fact that today, in China, this belief is still suppressed,” she says.

First taught publicly in 1992, Falun Dafa is a spiritual meditation practice that teaches truthfulness, compassion, and forbearance. But since 1999, the communist regime has been brutally persecuting the practice. Millions of Falun Gong practitioners have been arrested, illegally detained, tortured, and even killed to sell their organs for profit.

Shen Yun’s portrayal of spirituality is “a tribute to the human spirit, the humanity in all of us—East, West, everywhere,” said Ms. Vealitzek, noting that Shen Yun transcends Western and Eastern cultures through this spirit.

“I love the culture, the strength, and the vibrancy that comes through. And the love in people. That’s what I’ll take with me,” she said.