Shen Yun a ‘Once in a lifetime event’ 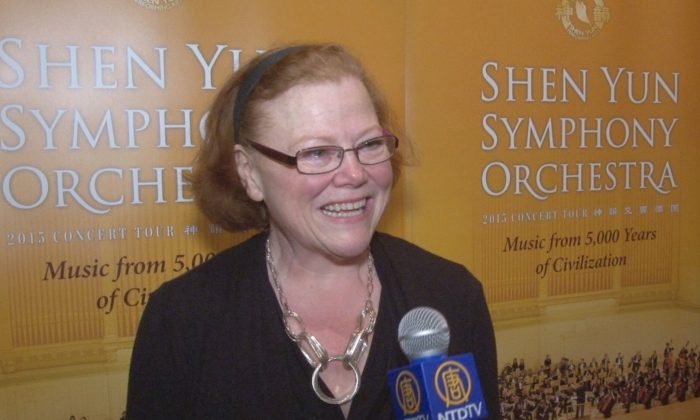 ATLANTA—In the words of musician Dana Ballard, Shen Yun Symphony Orchestra, with its unique blending of traditional Chinese instruments in a classical Western orchestra, creates “something special like the world has never heard before; a whole new kind of music.”

Ms. Ballard, who is the director of orchestras at the Mill Creek High School, accompanied close to 40 of her students to the performance at the Woodruff Arts Center on Tuesday evening, Oct. 27.

Shen Yun Symphony Orchestra is one of the performing companies of Shen Yun Performing Arts, an acclaimed classical Chinese and music company based in New York. The company has a mission to revive China’s divinely inspired culture.

Ms. Ballard was very happy that her students had a chance to experience the performance by the unique orchestra.

“I’m just so proud my students could be here to share it. I can see the excitement on their faces when they were listening, standing up and clapping so loud, I’m just so proud of them,” she said, adding that the orchestra “touched all of their hearts.”

“It was absolutely delightful. The music was beautiful, the musicians [were] so technically proficient. I’m so happy that my students could see such excellence in technique and proficiency with their bow or from their left hand.”

Ms. Ballard, who holds advanced degrees in music, has performed in a number of orchestras throughout her career as a cellist. But she said she had never seen another orchestra blend the two musical traditions of East and the West in such a manner.

“The merging of the traditional Chinese instruments with the Western instruments, we have never seen anything like that before and it was amazing,” she said.

“A once in a lifetime event.”

She had high praise for the performances involving the two-stringed erhu, or the Chinese violin, an incredibly expressive instrument, capable of imitating sounds from chirping birds to neighing horses, according to Shen Yun’s website.

“So beautiful with that haunting sound … That was inspiring, it was so beautiful,” Ms. Ballard said.

The vocalists, who use the bel canto style to sing Chinese texts, also caught her attention.

“The sopranos, they sent chills through us with the high notes they can hit, and the tenors, so beautiful—just everything,” Ms. Ballard said.

“Such high quality, so special,” she said.