Shen Yun ‘A Must See’ 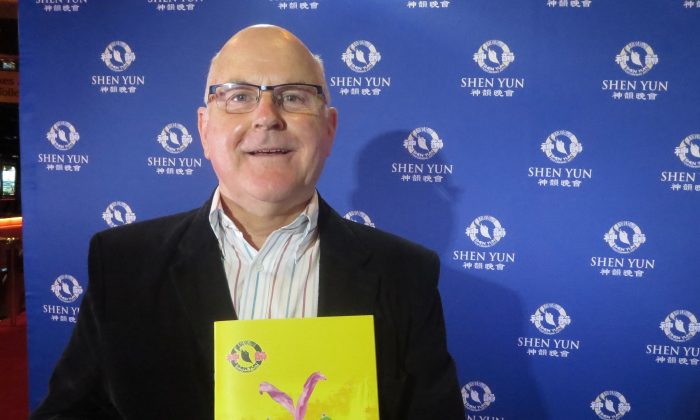 “I thought it [Shen Yun] was brilliant, a must see,” he said. “I loved the movement, the colour, the precision was very good and the coordination. It was a very, very [graceful] show. [It] drew you in.”

“There was a lot of movement, a lot of rhythm. Very active!”

Based in New York, Shen Yun is the world’s premier classical Chinese dance and music company. Shen Yun roughly translates as divine beings dancing, and with a mission to revive the true, divinely inspired culture of China and share it with the world, it is touching hearts around the world.

Mr. Maynes felt he could see divinity coming through the performance.

Along with classical Chinese dance, Shen Yun has solo singing and instrumental pieces. Mr. Maynes loved the solo performances of the sopranos, Min Jiang and Yuan Ling and the erhu virtuoso, Linda Wang. Mr. Maynes said he sings as a tenor and thought the sopranos were very good. He appreciated having the words in English on the digitally animated backdrop, and added that the expressiveness of the singers portrayed their emotion.

“I was just reading the text and the melody was what carried the song. The melody and the emotion and the feeling in the voice of the singer, even though one couldn’t understand the language,” he said.

Ancient Chinese medicine considers music to be healing—Mr. Maynes agreed with this idea saying, “It’s a form of changing the rhythm of the brain so it has a calming effect … it was good and I think it is true that music in all forms is a form of medicine.”

As a singer, he also appreciated and had ear for the instrumentals. Of the solo erhu performance, he said, “I enjoyed that very much, it was hard to believe there was only two strings there. There was a lot of variety in what she played and it reminded me a little of some of the hand movements of a good violinist with the vibrato, yes, I was very impressed.”

The blended orchestra of classical Western and traditional Chinese instruments added an extra dimension to the performance: “The Shen Yun Orchestra combines the spirit, beauty, and distinctiveness of Chinese music with the precision, power, and grandeur of the Western symphony orchestra. The result—two great traditions producing one refreshing sound,” the website states.

“Excellent, I was very impressed,” Mr. Maynes said. “I was quite surprised. It was good to see the Western and the Eastern instruments and sounds coming through and working very well complementing each other.

The digitally animated backdrops also caught his attention. “The backdrops were excellent and the movement between the backdrops and into the live situation was just brilliant. It was seamless,” he said.

“You’ve got to come and see it, it’s excellent.”