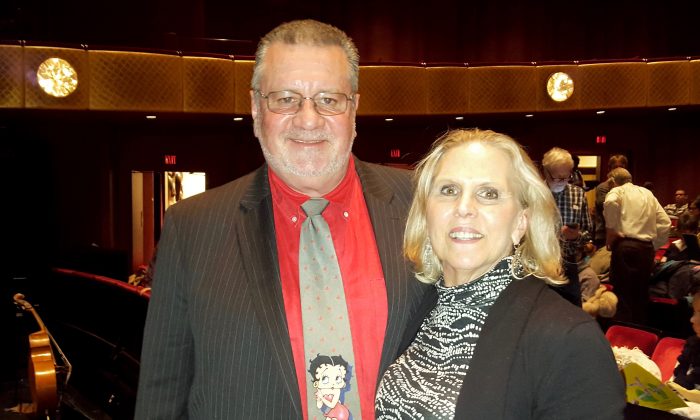 “I especially liked the Monkey King,” Mr. Chiboucas, an estate manager, had said during intermission, referring to the character Piotr Huang played on stage through classical Chinese dance. “I liked the personality of the artist doing the Monkey King, he was spot on.”

The mischievous Monkey King had, in the dance “Monkey King and the Dragon Palace,” wreaked near havoc under the sea in his search for the perfect weapon, drawing laughs and surprise from the audience at the David H. Koch theater.

This was one of the many stories New York-based Shen Yun told through dance, in its mission to revive 5,000 years of traditional Chinese culture, through the performing arts.

Mrs. Chiboucas, who works in marketing, felt the performance was “actually ethereal,” in the way that all the elements of the performance—dance, costumes, animated backdrop, a Western orchestra with Chinese sounds and instruments—integrated with such artistry.

The Chiboucas live up in Waterbury, Conn., and had seen the performance advertised through the local Palace Theater. But Mrs. Chiboucas was out of town the weekend Shen Yun was touring, so they made plans to catch a performance in New York, securing the closest seats to the stage.

And it wasn’t until they set foot into the theater, she mentioned, that they learned the history of Shen Yun. A group of artists came together in 2006 to form the company in New York—not China. In fact, a Shen Yun performance can’t even be seen in China, as the traditional culture has been oppressed under the communist regime. Instead, the artists have created a place of learning in upstate New York, where students attend Fei Tian academy to complete their training in the arts.

This pure sense of community was something she felt come through in the performance. “It’s just amazing, amazing,” Mrs. Chiboucas said.

“For me, it’s a cultural explosion, like my mind is wowed. Really. This group is keeping culture and tradition and their beliefs alive through this art, whether it’s part of the music or part of the dance or the costumes, it’s phenomenal,” she said.

Mr. Chiboucas said the performance shared such knowledge, and from hearing the appreciative applause, he felt the audience must be feeling as grateful as he did.

“I’m so involved in every aspect of this right now, it just draws me in,” Mr. Chiboucas said. The technical mastery had been a marvel for him.

“I’ve never seen a  dance [group] so on point. Each individual person has the exact same movement at the exact same time—It’s very hard to do that,” he said.

For Mrs. Chiboucas, it was inspiring on a personal level as well. She felt the stories touched on themes of good and evil, with good prevailing. There was a moral sense that was sorely needed today, and felt like a reminder to herself as well. “Oh, we should all have such traditions, all of us, because I think the world has lost a lot of traditions. We need that, the morals, moral fiber.”

Indeed, Shen Yun’s program explains that the traditional Chinese culture was deeply spiritual, with a society built on principles stemming from Confucianism, Buddhism, and Taoism. People believed in benevolence and justice, wisdom and propriety, and these are just some of the values that show up through the stories and art.

“We’ll be back, we’ll be back next year for sure,” Mrs. Chiboucas said.