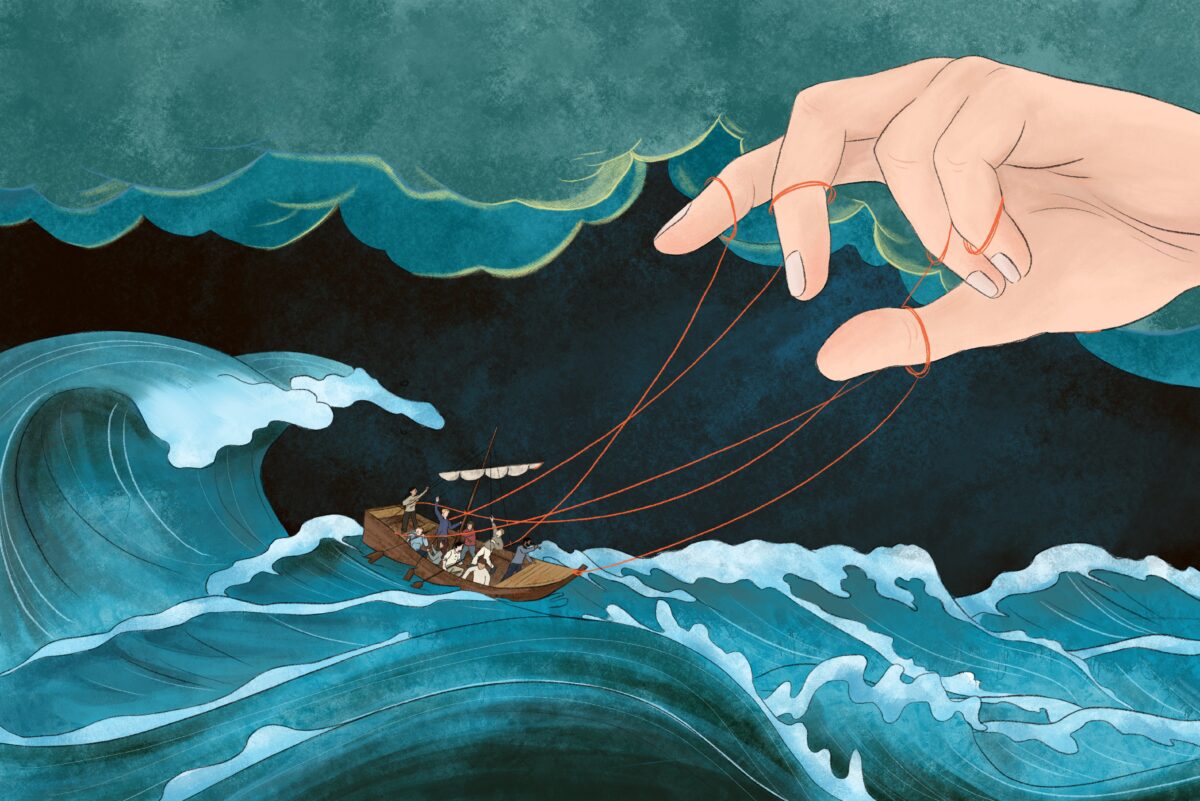 Having something you believe in can change the entire context of a difficult experience. (Linda Zhao for Radiant Life)
Books

Mitch Albom has made a career of learning lessons and sharing them in books. His most famous work recounts lessons about resisting greed and selfishness through insights into human goodness shared by his favorite professor, Morris “Morrie” Schwartz, in the weeks before Schwartz died of ALS. The book, “Tuesdays With Morrie,” ranks among the best-selling memoirs of all time.

Albom’s newest book tackles painful lessons learned during his own recovery after his adopted daughter died, leaving him wrestling with his most deeply held convictions.

“I wanted to write a story about help and seeking help,” he shared during an interview with Radiant Life. “That’s really what the principle was about—that, you know, we cry out for help a lot. And we ask for help a lot. But we don’t always recognize it when it comes.”

The book, “The Stranger in the Lifeboat,” lays out Albom’s take on one of the hardest things we learn in this life: what it means to lose someone we treasure and the toll that takes on our belief in a benevolent universe—and how those hardships may be the help we are searching for.

Benji, our unreliable narrator, recounts the tragedy that found him on a lifeboat with a mix of survivors from a sunken luxury yacht that had been filled with business leaders and geniuses—a billionaire’s attempt to mix an indulgent excursion with an extended brainstorm about how to change the world.

For most of the novel, we are adrift in the sea in a lifeboat with dwindling water, scant food, and a mix of the yacht’s distinguished guests and its humble crew. And then, an unexpected arrival—God.

“I tried to create a story where people were in the most dire situation that I could think of,” says Albom.

Albom was adrift himself when his adopted daughter, Chika, died. Albom and his wife have an orphanage in Haiti, and Chika was one of the children who lived there. Her death, although expected because of an inoperable brain tumor, was very difficult for Albom.

It’s an experience we all have sooner or, hopefully, later: One day, there is a presence in your life—a person you hold so close to your heart that you may not even fully appreciate what they mean to you—and then one day, they are gone, and the world has changed.

Processing this loss taught Albom something that can help many of us who have struggled to make sense of tragedy: “We have somebody whom we love, we adore, and then they’re not there anymore. And we can’t love them and adore them anymore. And we take that as if we were let down. God took them from us. But it’s not a punishment; it was a blessing to have in the first place.”

Rather than focus on what has been taken, we can focus on what we once had, says Albom. Sometimes that loss “is nothing more than the end of something that you were really fortunate to have. And if you looked at it as, ‘I was grateful to have that for the time that I did,’ then you wouldn’t be looking at it as a hardship,” he says.

For those with a belief and faith that sustains them in life and tells them that there is more to this mortal experience than molecules temporarily aligned in a human body, the loss of a loved one can challenge the peace that comes in knowing that divinity is real, and that an inherent benevolence ensures balance and meaning in the trials and tribulations of life.

When loss weighs too heavily on our hearts, or we can’t see meaning in what has befallen us, it can leave us bitter and blaming that Being we once held as the source of all goodness in the world. Sometimes our hardships just feel too unfair.

At one level, “The Stranger in the Lifeboat” is about learning to look at hardship differently, and what divine intervention might ultimately look like, explains Albom.

Learning to see the potential blessing in hardship sooner—and to suspend more quickly the bitter anger that can come with the inevitable injustices of life—is something Albom seems to understand well, though he denies any attempt at trying to tell other people how to live. “I don’t consider myself important enough to be telling anybody else, you know, what they have to do or how they should do it,” he says.

“When these lessons come to me. I am compelled to share them with other people because I just marvel at them. It was kind of that way from ‘Tuesdays with Morrie.’ I wrote ‘Tuesdays with Morrie’ to pay Morrie’s medical bills. So, it was a little bit of a different situation, because I was going to write it no matter what to pay his bills. But the way that I wrote it was, look at this wisdom that this man has—I mean, it’s amazing, you know? I got to take this last class with him every week, and say, ‘Here, listen to what he said.’ A lot of my stories are basically me saying, ‘I’ve learned this amazing thing in life. And let me tell you a story that illustrates it and see if you think it’s amazing too.’”

One of those lessons is that having something you believe in can change the entire context of an experience—like looking at loss by focusing on the gift someone’s presence once brought into our life. The same holds true with the knowing that can come from believing in something grand, powerful, and loving.

Albom explains that the new book’s title, “The Stranger in the Lifeboat,” is partly a metaphor for how we get through life. “We all have a lifeboat that we’re in. If you think about it, we’re all trying to navigate choppy waters, and occasionally sharks and bad weather. And there are times when we don’t have what we need; that’s the ‘lifeboat’ part. The ‘stranger’ part to me is your belief system. That’s what’s in the lifeboat with you; that’s the partner in the lifeboat.

“So, if you have no belief—if you don’t believe in anything, if you just think that we’re wormed through [when we die] and there’s no goodness in the world, there’s no God, there’s just existence and then non-existence—then that other force in the lifeboat is always going to be a stranger to you.

In some ways, “The Stranger in the Lifeboat” is really a book about Albom—a fictionalized account of a man sharing how he came to terms with his suffering and trying to use that experience to help someone else.