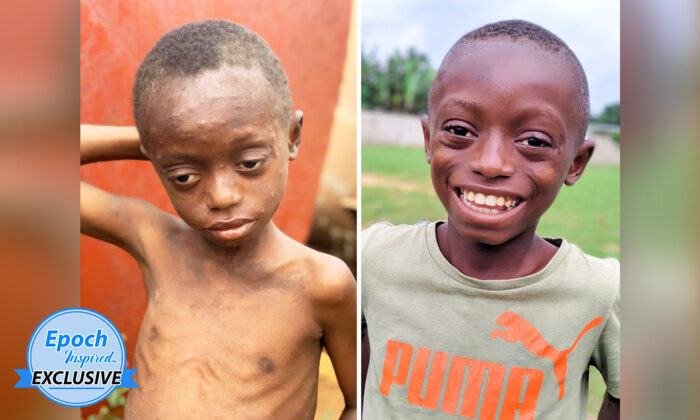 A battered child, outcast by his family on suspicion of being a witch, was on death’s door when an NGO found him alone on the streets of Nigeria. The child was so weak and sick, his rescuers feared he would die.

Yet today, almost two years since Saviour’s rescue and rehabilitation, he is one of the happiest children the NGO, Land of Hope, has ever known.

It was Dec. 12, 2019, when Land of Hope founders Anja Ringgren Lovén and her husband, David Emmanuel Umem, received a call for an urgent rescue. They were preparing for a Christmas party but dropped what they were doing to rush to the site, a 30-minute drive from their Children’s Center in Akwa Ibom State.

“We did not know what to expect,” Anja, who has been rescuing children for nearly eight years, told The Epoch Times. “The person who called us had seen a young boy, half-naked, along the road … we were very shocked when we saw the child.”

Describing the boy’s physical condition further, Anja recalled: “He was only wearing dirty trousers that he could not hold up. He was in so much pain, could hardly walk, and was crying out loud.

“His condition was very critical; it was a matter of life or death. He had been sexually abused and molested,” she added.

The boy, who was able to tell rescuers his name—Saviour—was HIV positive. Back at the center, he was diagnosed with malaria, typhus, a worm infection, severe bruises, and malnutrition.

Seeing his condition, Anja doubted that he would survive, but he was rushed to the hospital.

“I’m not a doctor, but I have witnessed a lot of child abuse, and Saviour was not only in a lot of pain; he was really very sick,” she explained. “I kept asking our nurse if she thought he would survive because, even though we immediately gave him HIV drugs, I was afraid it was too late.”

However, Saviour had a fighting spirit within. Despite his trauma, he thrived at the center. After just one week, he gained the strength to walk around Land of Hope and watch other kids play football.

According to the charity founder, the other young residents at the NGO’s Children’s Center also played a huge role in Saviour’s speedy recovery.

“When we rescue children and they are brought to Land of Hope, and are among other children, they feel more safe,” she told The Epoch Times. “It is also our children who welcome new children; [they] bathe and give food to the new children.”

Anja strongly believes that: “When children are given the right medical treatment, and a lot of love, care, and protection, they feel safe. They can really survive anything.”

Today, Saviour’s rescuers describe him as the “happiest child, who loves to play and have fun.” Modest and polite, Saviour enjoys attending school. It is known that he’d never been sent to school by his family, thus the opportunity to learn new things and read books has renewed Saviour’s spirit and brought a huge smile to his face.

Anja claims that over 10,000 children are accused of being witches every year in Nigeria. Unfortunately, most don’t survive.

“For me, to witness the incredible transformation of all our children is what makes life beautiful,” she told The Epoch Times. “I feel very humbled to be part of the children’s development, and sometimes I do believe in miracles.

“It is very often difficult for me to believe that children who have been molested, tortured, and outcast by an entire community, and left alone to die on the street with feelings of not being worthy of love, can ever survive such horrors and even be happy again,” she reflected. “All we need is love.”