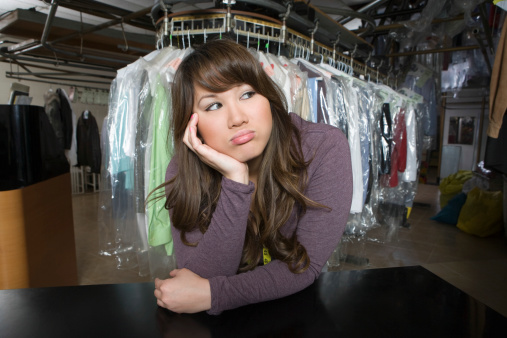 A few years ago I took an orange silk blouse to the cleaners. I used a cleaning store that shall be nameless but had several branches throughout Manhattan. I mentioned that the blouse had a stain near the collar. When I went back to pick up the blouse, they showed me that they had removed the stain. Unfortunately, in doing so, they also removed the color! Obviously, they had used a bleach.

I got angry, criticized them for the terrible job and said I wouldn’t pay. The manager got very angry at me and told me never to return. He needn’t have worried as I had no intention of ever going back. Now I use a small independent dry cleaner who is expensive but does good work.

Until I found the excellent shoe repair place I use now, I used another where the people were nice and pleasant but they did terrible work. Lifts would fall off and soles would just come undone and fall off. The shoe repair place I deal with now is quite expensive but their work is guaranteed and if I have a problem, I bring it back and they make it right. Oh, and they are nice as well.

Of course, I’ll never forget the old Weber’s which I believe is now out of business. Weber’s was a wonderful junk shop. You never knew what you would find there: Maybelline cosmetics 10 for $1.00 (Really!), a chain belt for 25 cents, a pair of silk panties for $2, a  wool fedora for $3. It was a real treasure trove. One day, I went to the cash register with an item for $3.37, giving the cashier a $5 bill and 37 cents. She handed the change back to me saying that I had given her too much. I explained she should give me $2 bills in change, but she insisted I had given her too much. She turned to the cashier next to her, who was just as dumb as she was and, motioning to me, said, “she’s so stupid.” Knowing when I was beaten, I agreed that yes, I was stupid and took back my 37 cents. With employees like that, it’s no wonder that they’re out of business.