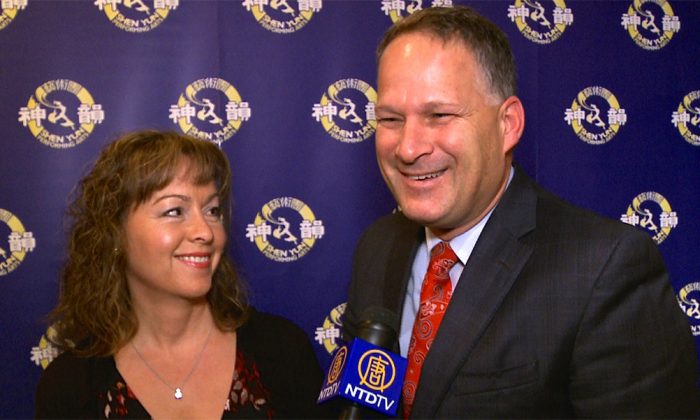 Mr. Bernard took in the opening night of Shen Yun Performing Arts’s four-show run at the National Arts Centre on Jan. 2. It was his third time to see the show, the last time being in 2009 when he came with his two children. This time he brought his wife, Catherine Bernard.

“I’m very happy. This is a great show,” he said during the intermission.

“The dancing is wonderful and how they do it—they make it look easy but it’s not.”

Shen Yun travels with a full, classical Western orchestra that is unique in that it includes Chinese instruments which bring out the distinct touch of millennia-old Chinese culture.

Mrs. Bernard’s father is a performer, and she grew up around music. She said the sounds of Shen Yun made an impression.

“I just found it very moving, the combination of the costumes, the sounds,” she said.

Mr. Bernard was looking forward to hearing the erhu in the second half. The two-stringed instrument is China’s violin and is known for its wide emotive range.

Shen Yun was founded on a mission to revive 5,000 years of divinely inspired Chinese culture, a heritage that has nearly been destroyed under the country’s current authoritarian regime. That holds particularly true for the decade-long Cultural Revolution started in the mid-1960s.

Shen Yun is rooted in traditional Chinese culture. Its dances depict the spiritual traditions, legends, and heroes that were the bedrock of Chinese society before communist rule, as well as tales of modern China that bring these traditions into the present.

China’s current regime has always seen traditional Chinese culture as a rival to its ideology, leading to the odd situation that Shen Yun, which travels to over 20 countries every year, cannot perform in China proper.

“I just find it strange that the folks in China don’t have access to this art. It’s wonderful. When you sit through one of these, you fall in love with China. And so we have access to it and not Chinese people, so that’s sad,” he said.

“It’s fascinating to hear the history and learn about the culture,” she said. “It’s really sad that people don’t have access to it there now, and I hope that changes in the near future.”

Mr. Bernard thought the regime’s efforts to repress the beliefs of the Chinese people is sure to be short-lived.

“The beauty about spirituality is the more you try to suppress it the more it comes out. So I think spiritually speaking, China is going to explode in a positive sense spiritually with time, as years go by. In every culture where spirituality’s been suppressed, it’s always gone underground and it’s always found it’s way up to back into society. So I think the future’s good,” he said.

Mr. Bernard sat as a member of the legislative assembly (MLA) in New Brunswick and ran as the Conservative candidate in the 2008 federal election. He’s since worked under at least three ministers as a senior policy adviser.