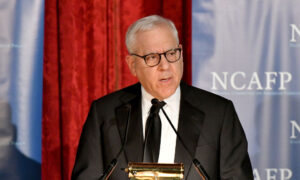 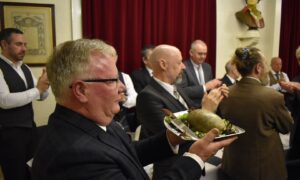 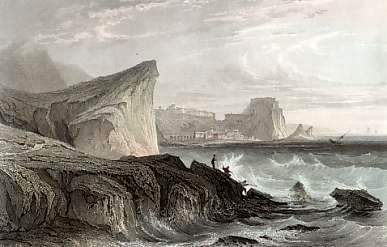 A 19th-century engraving of the Strait of Messina, the site associated with the ancient mythic creatures Scylla and Charybdis. This episode in the “Odyssey” has ramifications for today. (Public Domain)
Literature

Scylla and Charybdis: A Simple Myth, Appropriate for Now

Homer’s “Odyssey” is, by common and universal consent, one of the greatest poems in the world, possibly the greatest. Certainly, as far as Western culture is concerned, the very word “odyssey” has become synonymous with an epic journey, and more precisely the journey home: not merely literally, but also symbolically, as Odysseus finally achieves reunion with Penelope, or his own soul, or anima.

It is sometimes said that Western culture is epitomized by the journey or the straight way, whereas the East is characterized by the maze or the endless cycles.

Whatever the truth, the “Odyssey” is full of strange and intriguing characters and incidents, any one of which may shed light on our contemporary situation and the human condition as generally understood. One of my favorites, and a favorite, surely, of many young children, must be from Book 12, where Odysseus and his men encounter the threatening straits between Scylla and Charybdis. There is the passageway ahead, and through this they must go; but on the left side, on the cliff above, is the six-headed monster, Scylla, and on the right side, below, there is the deadly whirlpool, Charybdis.

This needing to steer a course down the middle—or very nearly so, which we will come to—has become proverbial, for we talk about “being between Scylla and Charybdis,” a vexatious position to be in.

Odysseus knows (because Circe, the witch, has told him) that whereas Scylla can attack and with her six monstrous heads (each containing three rows of sharp teeth) carry off and kill six of his crew, Charybdis poses an even more lethal threat. For to be drawn into the whirlpool, which sucks in the waters three times a day before spewing it out, would be fatal for the whole ship and its men.

Thus, Odysseus must steer right down the middle, and if there has to be a margin of error then to keep slightly closer to the left, Scylla, than the right, since the latter is outright destruction. How exciting! And this predicament is surely emblematic of life itself.

Yin and Yang Says This Too

In a way, we could compare the “Scylla and Charybdis Effect” with the more familiar (in today’s Western “anti-Western” culture) yin and yang of Chinese philosophy. Here we have a concept so rich and deep that to try to summarize it in a few sentences seems insulting. But in essence, every aspect of life has a yin and yang dimension. The yin is often considered the negative, feminine, softer force or energy that counterbalances the yang, which is the positive, masculine, and harder force or energy that interacts with the yin to create life, movement, and everything else.

However, the point is that too much yin or too much yang always leads to a correction, sometimes a violent and destructive one as nature rebalances itself. To be successful, we all need to keep yin and yang in balance, just as Odysseus needs to steer that fine line and find balance between Scylla and Charybdis.

And there is something else in this that is very important. I do not think that Scylla high up on the left of us, and Charybdis low down on the right of us, is accidental either. (Odysseus is returning to Greece via the strait between Italy and Sicily, so that Scylla would be north and Charybdis south).

The Greeks knew intuitively what we know scientifically; namely, that Scylla is a symbol for the left side of our brains and Charybdis for the right side. So, left, elevated, above us, is where logical thinking and calculations are done; the right is where the emotions and imagination thrive. We err in our lives by becoming too logical, too dry, too precise, too critical: Three rows of teeth grind us to pieces, and we end up fighting Frankensteinian monsters that we have put together in the laboratory of our thinking mind.

If that is bad enough, Charybdis is worse—much worse—for here we fall into the emotional pull that sucks the life out of us. We experience, as Homer put it, “the whole sea … boil in turbulence” and we are caught in a drag that we are never strong enough to resist, as round and round we whirl in emotional hell.

Sound familiar? Why, then, is it so difficult to steer that middle course? Odysseus was doing so quite well. He had himself and his men on the lookout and armed to resist Scylla, but the sudden roar and pull of Charybdis suddenly distracted them, and while they stared fascinated by the great whirlpool, Scylla swooped down and six men were lost. Ever experience that? Being so logical, then one emotional fascination results in all composure being lost?

One application of this struck me when I reflected on that wonderful and original “Batman” movie starring Michael Keaton and Jack Nicholson. Quoting from memory, I remember that wonderful moment when the Joker replaces Boss Grissom and provides (ironically) a moving tribute to his former boss (whom he has himself killed). Grissom, he says, may have been a gangster, a murderer, a racketeer, but “on the other hand, he had a tremendous singing voice!”

This is irony, but there is a profound observation in this. Namely, that the Joker (and this is surprisingly for a villain) is avoiding what we as humans like to do: that is, to pigeon-hole people as one thing or another. We like, in short, to avoid any ambiguity about how we feel or think about them, or indeed about a situation generally.

In this context, of course, sailing—and holding one’s course—between Scylla and Charybdis is living on the very edge of ambiguity.

I am British. Is Brexit good or bad? Well, personally I like Brexit and have supported it consistently. But given that, I need to ask myself, so what is bad about it if so many of my countrymen dislike, even detest it? What is the case from the other side? To investigate this is not necessarily to change my mind (and it hasn’t), but it is to keep me on the path avoiding the two evils on either side: perhaps, the contempt of the mind (Scylla) and the bigotry of the emotions (Charybdis).

Some of you are probably American. Is President Trump good or bad? And, by the way, it is no good saying now that that binary opposition is too simplistic, because it is exactly such a binary opposition that most people understand and commit to—including the media. But however you answer that question, consider the evidence from the other side. Do so, not to change your thoughts or your passion, but at least to see why others see things so differently. Are you too logical? Too emotional? What is the balance point where you really can see clearly, see clearly what is?

A Balanced State of Mind

This is a state of mind that the great American novelist F. Scott Fitzgerald summarized in one sentence: “The test of a first-rate intelligence is the ability to hold two opposed ideas in the mind at the same time and still retain the ability to function.” In other words, to steer successfully between Scylla and Charybdis.

And the great English poet John Keats explained this in even more depth with his concept of “negative capability.” Writing to his brothers George and Thomas in 1817, Keats said: “At once it struck me what quality went to form a Man of Achievement, especially in Literature, and which Shakespeare possessed so enormously—I mean Negative Capability, that is, when a man is capable of being in uncertainties, mysteries, doubts, without any irritable reaching after fact and reason.”

Thus, in a world that is increasingly becoming polarized, where people rush to make up their minds based on slogans and jargon, the story of Scylla and Charybdis can remind us of what it means to be a hero or heroine in this journey of life: It means to steer a straight-down-the-middle line between our mind and our emotions, and not be too distracted one way or the other.