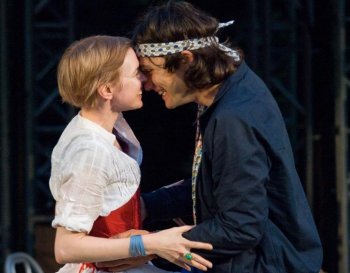 BY Zoe Ackah TIMEAugust 12, 2010 PRINT
Because Shakespeare’s plays are almost 400 years old, people have had time to steep them in pretentiousness. You can get a degree in Shakespeare studies if you want, and therefore it is necessary for scholars to make Shakespeare sound intellectual. You can get as heady as you like if so inclined. The Bard left us so much to dig into.

But thinking hard is not required to enjoy a play like Romeo and Juliet. Populist Shakespeare is very much in line with the tradition.

In Shakespeare’s era, plays were performed for an audience that bided it’s time bear-baiting. (It’s like bullfighting for the English, and you guessed it, the bear never wins.) The water was bad in those days so everyone drank beer—all the time. The cheap seats at the Rose were standing ones. There was no “fourth wall.” The audience was free to heckle the performers, interject, sing along and throw rotten fruit when necessary. Really, those were the days! Fruit would render my job irrelevant.

Don’t be afraid, the words are still in English, so when Romeo and Juliet is done properly the text is transparent. Yep, see-through. You should be able to catch many of the puns, half of which are lewd and cater to the Monster Truck crowd of yore. Why do we still love these plays? Because they are parables that warn against humanity’s most base instincts while pandering shamelessly to them at the same time.

True plebe that I am, my first Shakespeare encounter was in High Park as a child. The ground was wet and I liked the sword fighting. The players came right through the crowd hacking and slashing. It was this memory that brought my 9-year-old son and me out to Canadian Stage’s Dream in High Park Family Sunday last week.

Family Sundays is a pre-event program put on by Canadian Stage before the play is performed in High Park’s outdoor amphitheater. It requires pre-registration, though you can show up on the day at 5 p.m. to try your luck. Guided by members of the cast and crew, we took a backstage tour that included a try with the blunted rapiers.

Next, cast members lead us in a couple of theatre games that sent my video game addicted child into a panicked look for his imagination. Outwardly, he appeared bored through most of the hour but gave rave reviews on the evaluation sheet. I would rather have played theatre games with the dramaturg.

The lull between 6 p.m. and 8 p.m. is a perfect time to unpack your healthy picnic and then take a brisk walk. Or you could do what we did and head over to the Grenadier Restaurant for a perfectly acceptable burger and fries and then walk right back to sit on your blanket to watch the actors warm up.

This year’s play at The Dream at High Park is Romeo and Juliet. It has been trimmed by a third to make it short enough for the neophyte. I might have complained that the characters and play were somehow flattened as a result, but when my son started to lean heavily against my shoulder in the last 20 minutes I realized the wisdom of truncation.

Director Vikki Anderson employs the “play within a playz” device, stranding a troupe of rowdy actors in a present day Verona train station. All trains are delayed and a fight breaks out. How will the station master restore order? By forcing the actors to entertain the stranded passengers. And so begins our play proper.

It was a bit shocking to hear Romeo’s lines delivered à la Mike Myers. Jeff Irving’s Romeo was representin’ Scarborough, sporting flattened out vowels and a suburban whine that is characteristically Canadian. I’m not looking for Olivier, just basic good diction. In Irving’s favour are his energy and enthusiasm. He was not a romantic Romeo, but an infatuated teenage one. His toddler temper tantrum in the middle of Act III was kind of fresh. I’m still not sure how I feel about it, but it certainly was memorable.

I have no idea why this sombre Juliet (Christine Horne) fell in love will the guy from Wayne’s World. It couldn’t have been easy. Horne somehow managed to say all her lines the same way. Each artfully constructed phrase was crushed in the back of her throat until its natural rhythm was beaten out of it. The musical element was entirely missing. There was too little thought and just a kind of single dominant affect when each line should be nuanced. The lyricism is written into the lines. It must be there. It is the vehicle that delivers Olde English to the modern audience.

The comedic elements were well directed and well played but overall it was lopsided. The tragic elements in this production lacked any depth, and so both seasoned and uninitiated were denied the necessary pathos. Clinton Walker’s Mercutio was as loud, cocky, and lewd as one would hope, but one word of advice—take time when you die. Let the inevitable sink in before you deliver “A plague on both your houses!” It was like a bad note in the middle of a perfectly good solo.

Ron Kennell’s Nurse was the standout performance. Women didn’t act in Shakespeare’s time. Juliet’s Nurse is a role written for a cross-dressing merchant seaman. Kennell upstages everyone each time he appears.

Acting Shakespeare is a wonderful and time-honoured tradition. We appreciate it because it is hard and magical when done well. You could clearly see how experience with the conventions gave the older actors an advantage. Only experience can teach young actors how to force an audience through the full gammit of emotions using prose and poem as the central element in the delivery. My review today doesn’t really matter. In a decade my son will by buying tickets to see these same actors perform somewhere. When I asked what he thought at the end he replied “It was perfect”. He will be back and by then I trust everyone will be ready.

Romeo and Juliet runs until Sept. 5.