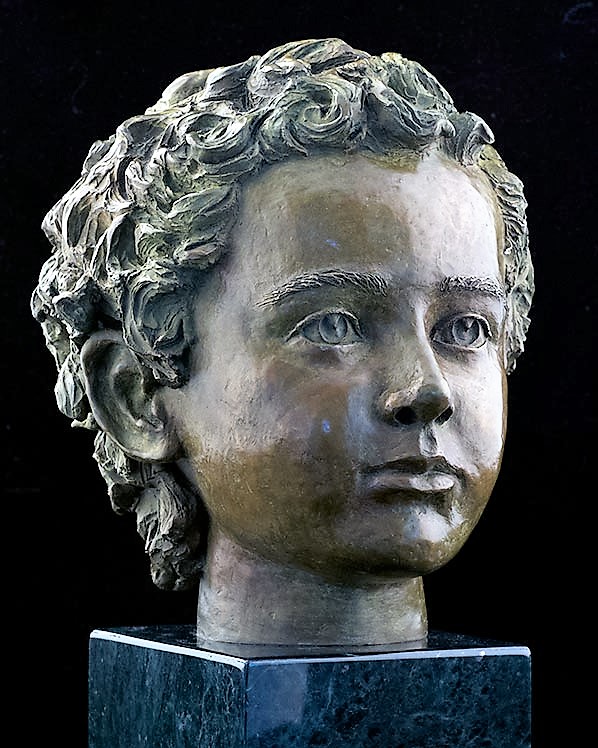 Sculptor Infuses Spirituality into her Art

NEWBURGH—The Artists of Excellence series that highlights talented regional artists has given the latest spotlight to sculptor Christina Biaggi. The artist displayed several works and models of installations in glass displays in the foyer of the Mindy Ross Gallery of Kaplan Hall at SUNY Orange-Newburgh.

Biaggi spoke on Aug. 27 about various installations she is working on and future projects. She said she wants to bring spirituality back into works of art.

“I am very much into the spiritual in art,” Biaggi said. “Art has to have some meaning. It just can’t be some blobs on paper. Modern art disparages the spiritual.”

As a sculptor who works in bronze, Biaggi has also completed small sculptures of female divinities in wood. Her clay sculpture of the goddess Tiamat on display references the famous life-size bronze sculpture of Zeus hurling his thunder bolt. Wood sculptures of Nike displayed the goddess with wings outspread.

Biaggi is well-known for her bronze sculpture.  The artist has done a number of bronze busts of people and animals. She acquired a skill in realistic portraiture at the University of Utah.

She works from life and photographs in the medium of plasticine which is then cast into bronze at the Polich Tallix fine art foundry in Rock Tavern. Her commissions are willing to sit for her for hours. “It took me—some faces are easier and some faces are harder—anywhere from 45 hours to 125 hours.”

I tried to capture the soul.
— Sculptor Christina Biaggi

Biaggi said she is not just trying to capture a physical resemblance. “I tried to capture the soul. That’s a big deal—something beyond just the physical attributes.” She has created sculptures in wood and clay and collages in mixed media. The artist earned a PhD in Art and Aesthetics from New York University.

The sculptor is now looking to compete in an art project approved by New York City Mayor DeBlasio for a piece in the city’s Central Park called “Why are there no women in Central Park?”

The park has about 40 sculptures of men and only four of women.  The female characters are fictional: Alice in Wonderland, Mother Goose, Juliet (and her Romeo), and a fairy. “There is no Sojourner Truth, no Elizabeth Cady Stanton,” Biaggi said.

Soon the park will have two American icons of modern womanhood as full body sculptures in bronze. The competition is for a bronze sculpture of Elizabeth Cady Stanton and Susan B. Anthony in one piece.

Biaggi said a site has been assigned for the piece along 77th Street at Central Park West. “Teddy Roosevelt is down one block, Lincoln is down two blocks, and Frederick Douglas is across the street,” she said.

The exhibit runs Aug. 23 through Oct. 14. Artists of Excellence highlights talented regional artists that the community can become acquainted with and view artwork in various media.

Biaggi has exhibited throughout the United States, Europe, and Australia.  She also has achieved significant international recognition for her contributions to the field of Goddess-centered art and scholarship.