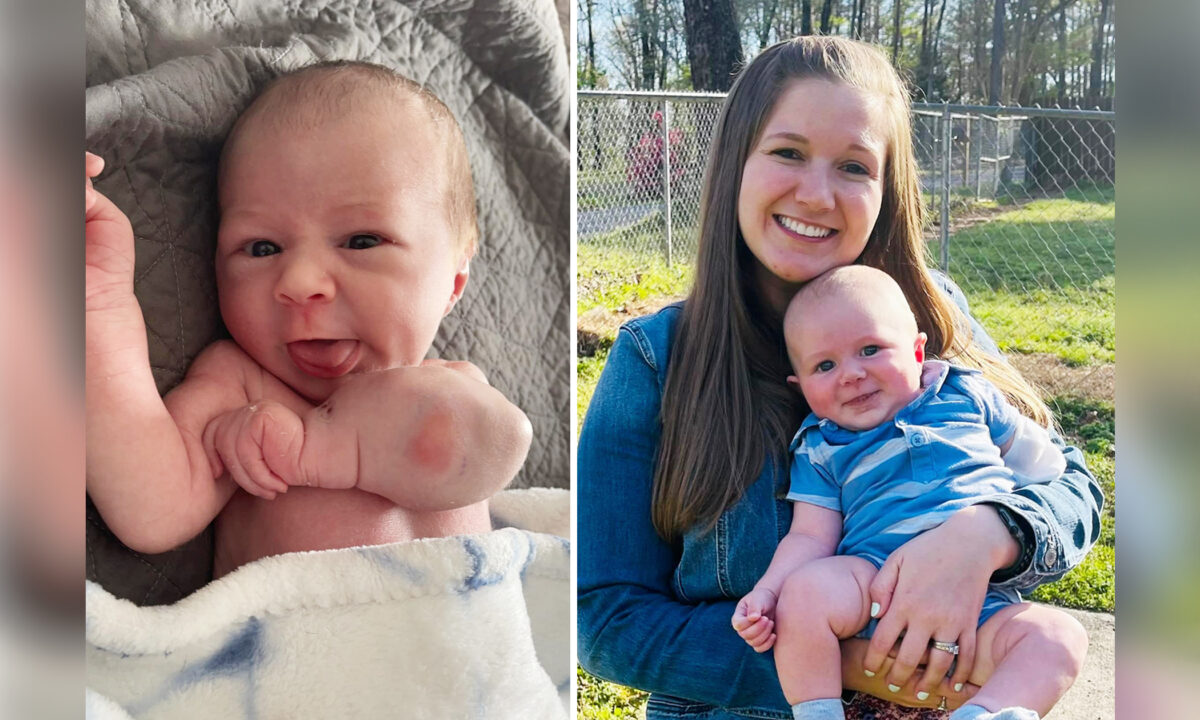 First-time parents from Alabama were devastated when they learned a swelling on their newborn baby boy’s arm was cancer. They fought for more time from their doctors, trying chemotherapy before amputation in hopes of shrinking the tumor and saving as much of the baby’s arm as possible.

Grace Adkins, 26, of Lakeview, shared with The Epoch Times how she and her husband, Riley, coped with baby Luke’s diagnosis, how faith gave them strength to navigate the devastating news, and how she feels about the future.

“My pregnancy was perfect,” Grace, a deputy with Tuscaloosa County Sheriff’s Office, recalled. “[Luke] was born with that mark on his arm; we were surprised and we didn’t know what it was. We expected to stay a night or two in the hospital and get to come home with our baby … straight out of the gate, [but] that wasn’t what happened.”

Luke, who was born on Dec. 9, 2021, at Ascension St. Vincent’s Hospital in Birmingham, was immediately placed in his mother’s arms. However, just a few minutes later, nurses took the baby back, noticing swelling and discoloration on his arm. They asked Grace not to worry and immediately did a few checks on the newborn.

An X-ray then ruled out broken bones—”apparently it’s really common for babies to break bones during birth,” said Grace. However, suspecting vascular problems, doctors had Luke transferred to the University of Alabama at Birmingham’s (UAB) NICU.

“He couldn’t open that hand and he couldn’t flex that wrist,” Grace recalled. “We were just a crying mess … we didn’t even really know what to be upset about yet, but we knew something was wrong.”

Dad Riley, 29, a maintenance technician, went with baby Luke while Grace stayed at St. Vincent’s with a friend that night. Despite having had no prior experience in caring for a baby, Riley launched himself into changing diapers and feeding bottles until Grace was discharged the following day.

When the weekend arrived, Luke was transferred to the Children’s NICU and the parents were told that they were going to do a biopsy of the mass.

“I remember praying a thousand times for God to please just give me the chance to be this little boy’s mom, ” Grace said, recalling that moment in the NICU with her newborn.

It took doctors five days to diagnose Luke with rhabdomyosarcoma, or RMS, a rare type of cancer that forms in soft tissue, and mostly affects children and adolescents.

“He was born on a Thursday. On Tuesday, they came in and they told us it was cancer, released us, and told us to follow up outpatient,” Grace told The Epoch Times. “We fell apart on the car drive home and didn’t have any idea on what to expect.”

Various questions plagued the parents’ minds. They wondered if his cancer was contained to the arm, whether it would spread to the body, if he was going to make it, and what they were going to do.

Words from a friend brought some comfort to Grace: “God doesn’t give sick babies to parents who won’t take care of them.”

After more testing, doctors confirmed that Luke’s cancer had not spread. The original plan was to amputate his arm at the shoulder and then proceed with chemotherapy, but his parents were determined to try to save the baby’s upper arm to improve his quality of life.

Oncologist Dr. Johnston, and orthopedic surgeon Dr. Kafchinski, whom Grace describes as “both super great women,” agreed that they could try chemotherapy first to shrink the tumor, with four rounds of three-week cycles.

In his first week, Luke was admitted and fitted with a central line in his chest, before continuing as an outpatient. This was a painful time for first-time parents Grace and Riley.

“They tell me all the time at the hospital that there was nothing I could have done different in my pregnancy … this was just a random thing that happens,” Grace explained. “But it’s so hard not to question that, and it’s really hard for me when [Luke is] feeling bad; he’s just crying, and he’s just clearly hurting … it’s hard for me not to want to lay down and cry next to him.

“My husband and I, we would rather it be one of us; I would let them cut my arm off for him to get to keep his.”

Luke’s first big dose of chemotherapy that he gets in the first week of each cycle makes him sick; he throws up and gets really fussy, according to his mother. However, the next two times during each cycle, she said, doesn’t cause him to fall sick, but to feel pain instead.

“We have to give him so much medicine that it breaks my heart,” said Grace, who, alongside her husband, has learned to give shots at home, clean Luke’s central line, and give medicine to help control Luke’s pain response, known as chemo-induced neuropathy.

Between the second and third cycles, they did more imaging and found that the tumor was shrinking. They decided that after two more cycles, they could shrink it down enough and then do the surgery at the elbow.

During his fourth cycle of chemotherapy, Luke went through a blood transfusion because “his numbers just tanked,” but imaging showed the tumor was shrinking from the wrist towards the elbow. It was not the ideal direction, but Luke’s doctors felt ready to operate.

They amputated the baby’s arm at the elbow in April and made plans for preventive chemotherapy. During this stressful time, Grace and Riley were also fielding attention from a growing online support network. They thus created a Facebook page, The Adventures of Luke, to keep in touch with the people who cared to reach out.

Grace now hopes that the page encourages others to appreciate their own children like never before.

She explained: “I just feel like sometimes it’s easy to take a healthy, normal kid for granted. Even for us, having a baby that started chemo at 2 weeks old, and we had to amputate his arm, it could still be so much worse … you just can’t take anything for granted, and that’s something that we’ve learned.”

The mom and deputy, who also teaches part time at the University of Alabama, is on maternity leave to take care of Luke as he heals from surgery. All being well, the baby will have his last chemotherapy treatment on July 1.

Recalling the biggest challenge that she and her husband have had to deal with during this time, Grace said that, while family and friends want to help, Luke is immunocompromised, thus not even his grandparents can hold him.

“Of course, it breaks their hearts; it breaks ours,” Grace told The Epoch Times. “But we just can’t risk him picking up any germs.”

Despite all that he has been through, baby Luke has learned to smile and giggle when he feels good, and a month-long break from chemotherapy has transformed him into “the happiest baby.”

“He has felt so good … it makes all the other stuff worth it, definitely,” said Grace.

Grace and Riley still worry about Luke’s future. They worry about the side effects of chemotherapy and the limitations of life with one arm. Additionally, the parents said they’re also concerned about bullying at school, his career options, physical and mental development, and whether the cancer will come back.

Despite all these thoughts, the parents are determined not to raise their son to feel sorry for himself.

For now, the parents are shelving their “down-the-road” concerns for more “day-to-day” concerns, like making their baby comfortable and helping him heal. It’s getting easier.

Reflecting back on the entire journey, Grace said: “I am in a lot better place than I was four months ago. I’m confident that we can handle whatever this journey throws at us … I don’t want to say I’m fully prepared, but we are as prepared as we can be!”