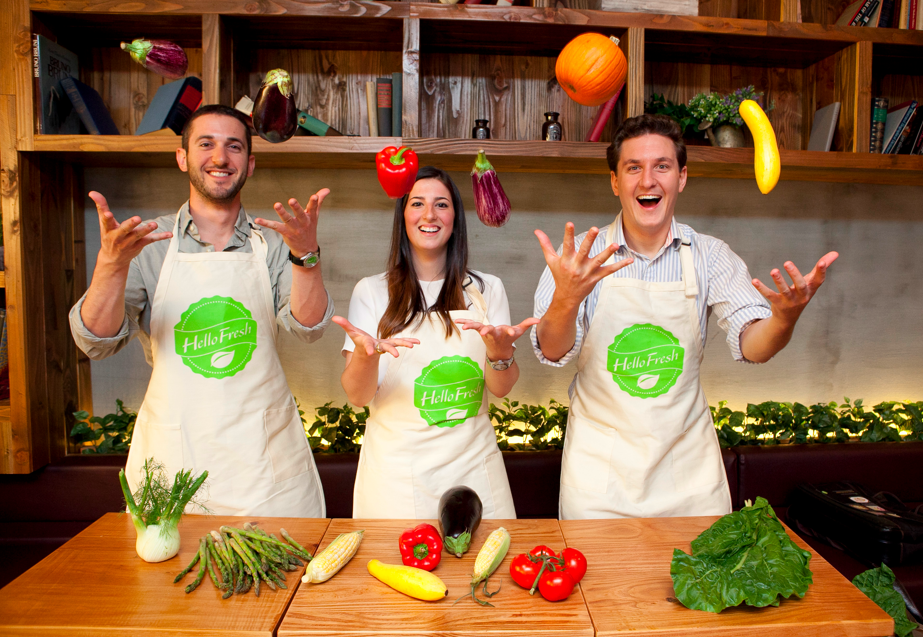 A few of the enthusiastic crew from HelloFresh. Dan Treiman (L), COO, who came from a family that didn't cook. His rebellion consisted of watching television food shows and cooking up a storm. The first dish he made was duck flatbread hoisin pizza. Andrea Golcher Stone (C), recipe development manager, has the job of coming up with ever new recipes, every week. Growing up in El Salvador, even when she was young, her wish list for Santa Claus included kitchen utensils. Hamish Shephard (R), CEO and co-founder, grew up on a farm just outside London that makes award-winning honey. (Samira Bouaou/Epoch Times)
Food

Dinner Kits: Say Hello to a New Way of Cooking

After long hours at work, you head home only to realize that you have nothing in your refrigerator. By then, hunger is gnawing at you. Do you (a) capitulate to takeout (for the fifth time this week), (b) binge on the junk food you have laying around, or (c) wander to the grocery store and make impulse buys?

Despair not, ye New Yorkers who want to cook healthy, good meals at home but can’t find time to battle long lines at the grocery store, let alone muster the mental energy to plan meals. If the sight of another Trader Joe’s line is enough to make you lose heart, read on.

What you might need is someone to plan your meals and deliver the ingredients, along with step-by-step cooking instructions, right to your doorstep—in a neat, ready-to-cook dinner kit.

This recent phenomenon is an increasingly popular option for busy people who still want to cook but without the hassle of planning and shopping—not to mention the amount of food thrown out in the flurry of ever-changing plans.

Melissa Tischler, 37, from the Upper West Side, is a consultant who works long hours and travels a fair amount. Her fridge sits empty much of the time. “I felt like I should have been cooking more,” she said, describing herself then as a delivery and takeout junkie. “It wasn’t the best for my health. It felt irresponsible.” But it was a hassle to figure out what to make and to shop for groceries.

She tried the service HelloFresh last January and has been hooked ever since. Once a week, on a Wednesday, a chilled box comes to her packed with fresh ingredients for three meals (each enough for two people). Each chef-designed recipe is calculated to prepare in 30 minutes or less. Recipes include meals such as Mustard Glazed Swordfish with Quinoa, or Braised Chicken with Potatoes, Olives, and Lemon.

Tischler said the vast majority of the time, the dishes have been great. In over nine months of cooking, she had expected dishes to start repeating and was surprised when they didn’t, with a few exceptions. She also found herself cooking dishes she would not have tried on her own. “You learn some interesting preparations as you go. For example, I haven’t cooked a lot of pork in the past but a couple of pork recipes have been delicious.”

Now, most trips to the grocery store are just to stock up on staple items like milk.

For Hamish Shephard, the ebullient HelloFresh co-founder, the impetus behind the company was not just to make cooking easy, healthy, and delicious, but to also make the end of the day an enjoyable time where one can relax and be creative.

“It’s a bit of escapism almost. Getting something out of the Styrofoam and putting something in the microwave isn’t stimulating in any way at all,” he said. But when cooking, “you create something, it’s a sense of achievement.”

HelloFresh got off to a popular start in Germany and quickly expanded to the Netherlands, and the U.K. In the United States, it’s currently found on the East Coast, down to Miami, but also Midwest into Chicago.

Each team that works at HelloFresh is local but it works with teams in other countries. Local teams make sense in terms of sourcing fresh ingredients as fast as possible, but also in terms of getting a feel for local preferences. For New York, it’s totally eclectic.

When the company expanded into the United States, the distinguishing characteristic was to offer choices to cater to a mix of palates, in contrast to its other markets (the Dutch are much more homogeneous, said Shephard) as well as to local competing services in New York City.

But Germans, for example, prefer creamy sauces over acidic sauces. “Worldwide the most loved cuisine seems to be Mexican,” said Shephard. Asian dishes also do well.

About 200 kinds of produce items and 75 different condiments or spices were used so far this year. The recipes are developed to be accessible to novice cooks but adventurous enough for more seasoned cooks, in particular through the introduction of different preparations and new ingredients.

Both economic and environmental arguments can be made for receiving just the right portion, rather than having to buy bottles of spices, say, that will sit on the shelf unused for many years.

In the end, working closely with suppliers on exact amounts, and unlike grocery stores who have to throw away stock, Shephard said HelloFresh is “exactly zero food waste as a company.”

The prices start at $9.94 for one non-vegetarian meal, and $8.28 for a vegetarian meal (including transportation). A box for two people costs $69, including delivery. The website gives comparisons of the same ingredients bought at FreshDirect ($83.72 plus delivery), Stop & Shop Peapod ($83.15 plus delivery), and Safeway ($98.33).

There is no joining fee or monthly fee and it’s simple to pause the service whenever needed. “We’re no commitment,” said Shephard.

In comparison to expensive takeout options, there’s no question that HelloFresh saves money, in addition to being healthier—you can see exactly the amount of salt, sugar, or fat going into what you’re cooking, which is not so obvious with restaurant meals.

But for many, the consideration boils down to time and energy. Both are in scarce supply and dinner kits such as HelloFresh fill a need.

I tried my hand at a Vietnamese Chicken Salad last weekend. Everything came pre-portioned. It required a bit of chopping; some poaching; some mixing. I cheated a bit by boiling water in the electric kettle.

There is some flexibility, for example in how much of the chili pepper I chose to use (apparently not enough for my husband’s taste).

The recipe card indicated about six steps, in clear and logical order, to avoid the cooking fiasco that usually happens when a cook doesn’t read the whole recipe through and forgets to start a time-consuming step early in the process.

For the adrenaline junkie, it will lack the Iron Chef-like excitement of trying to cook up something from a random array of ingredients. For everyone else, it takes the guesswork out of the process, and makes cooking simple and relaxing—and quick.

As I sized up the finished chicken salad, I thought, this was so easy. I could have done this myself—the idea, the shopping, and parceling out the proportions. I could have, but to be honest with myself, I spend more time reading cookbooks than actually cooking. Reading cookbooks is a comfort activity, and the actual act of cooking, even though I love it, is often too daunting to even contemplate.

All in all, there’s no doubt that dinner kit subscription services can lower the barrier to cooking.

For anyone who’s ever tried to get to a reluctant partner to cook, nagging and cajoling could give way to the dinner kit to inject a fun challenge, a sort of gamification of cooking.

Tischler found that the dinner kit appeals to the male sensibility, she said. Her fiancé, who under normal circumstances would not be inclined to go to the grocery store, approaches the kit with a project mindset. “It appeals to him as a kid who grew up doing Legos and building models. Fifty percent of the time he makes dinner and I get to kick back. He really enjoys it.”

HelloFresh doesn’t promise domestic bliss, but it does have at least one testimony of a couple who wrote in about how the service saved their marriage. From rarely eating together, they started cooking and eating together every evening, which helped them reconnect.

And there are plenty of reports of husbands who are now cooking, said Shephard.

Getting ingredients and recipes delivered to you? Great. Healthy, delicious meals? Ditto. Getting reluctant partners to happily cook for you? That’s genius.

To keep up with what’s cooking in the food and dining universe, follow us on Twitter @EpochDining
https://twitter.com/EpochDining