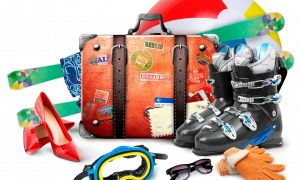 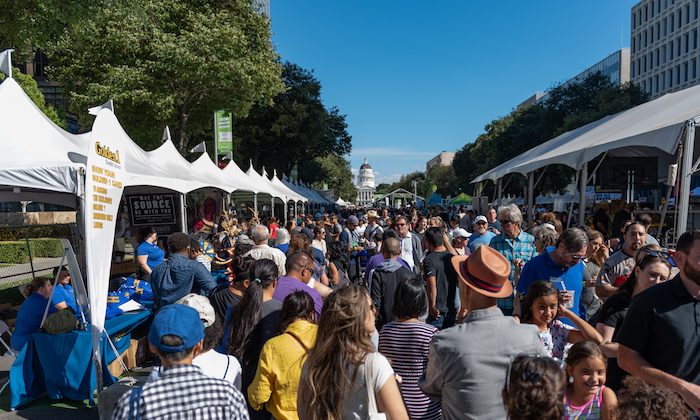 SACRAMENTO, Calif.—It takes a special confluence of flavors and details to elevate a meal to “best I ate all year” contention. Sturgeon skin chicharrón, crunchy, salty and ingenious, and confit duck leg, served with cardamom and black pepper roasted figs, gets the conversation started. Nestle those between courses of fresh vegetables and lamb, and now we’re really talking. For the mood, add communal seating on the historic Tower Bridge, spanning across the Sacramento River, with the sunset adding dramatic flicks to locally sourced wine clinking all around. This meal, a show—and traffic—stopper, was 2018’s best.

I wrapped up business with the braised lamb shoulder with roasted Cipollini onions and moved to dessert, preserved peaches with lemon verbena and ricotta. My taste buds and I, similarly, fell hard for Sactown.

I didn’t consider myself lucky until I scored a ticket to Sacramento’s sixth annual Tower Bridge Dinner. The culinary occasion, one of the most noted events of the year for Sacramento, and hottest culinary tickets nationwide, showcases the vast bounty grown, raised, brewed, distilled and fermented by the farmers and ranchers around which the region’s farm-to-fork movement centers. It serves as the September Farm-to-Fork Celebration’s finale on what may be the city’s most recognizable landmark. Of 800 tickets, only 80 are made available to the public. In 2018 they sold out in 15 seconds.

The Tower Bridge Dinner raises money not only to support the next year’s free Farm-to-Fork Festival on Capitol Mall (which attracted more than 80,000 people in 2018, up from 65,000 in 2017), but also for the College Assistant Migrant Program (CAMP) Scholarship at Sacramento State, designed to help children of migrant farmworkers. An investment to help relieve the costs of schooling now, and in the economy’s future. Truly, a community affair.

“This event has come a long way in six years,” said Patrick Mulvaney, owner and chef at Mulvaney’s B&L, who co-founded the dinner. “When I moved here in 1991 I fell in love with Sacramento and its year-round growing season.”

Though the region declared itself America’s Farm-to-Fork Capital in 2012, Farm-to-Fork is no passing fad. The Sacramento region has been an agricultural powerhouse for centuries. In 1808, a writer with the Spanish expedition that discovered and named the Sacramento Valley wrote of his surroundings, “Canopies of oaks and cottonwoods, many festooned with grapevines, overhung both sides of the blue current.”

The Mediterranean climate, characterized by hot, dry summers and cool, wet winters, boasts a year-round growing season, ideal for a bounty of produce, both for direct consumers and rotating restaurant menus.

I learned that California yields a massive rice crop, with 99 percent of it grown over 550,00 acres in Sacramento Valley to the tune of 5 billion pounds per year. California supplies 80 percent of the globe’s almonds and Sacramento-based Blue Diamond is the largest almond processor in the world. And, there’s a reason some call the city “Sacra-tomato.” Over 96 percent of the United States’ and 33 percent of the world’s processed tomatoes come from with 250 miles of Sacramento. Fun facts, sure, but that may not lure you to the Wild West.

But this might: Robust nuttiness on the palate melting away into a smooth, buttery finish. I’m talking about world-class caviar as a staple on most area menus. The region leads the world in domestic caviar production. In fact, 80 percent of domestic caviar is farmed in the greater Sacramento region and supplied to some of the nation’s finest restaurants and providers, including Petrossian and Per Se in New York City. Sterling Caviar, supplier to 2018’s Tower Bridge Dinner, won my vote for the most memorable bite of the evening; a mini waffle cone filled with whipped avocado and topped off with a dollop of sturgeon caviar. From its native region this farm-raised sturgeon—if the eggs aren’t from sturgeon it’s simply called roe—can be on your doorstep within 24 hours.

Wine grapes are a culinary attraction worth basing an entire trip around. The more than 200 wineries and tasting rooms, many offering free or affordable tastings and opportunities to meet the winemakers themselves, are worth raising a glass to! Wine grapes have been the number one crop in Sacramento County for more than a decade, with a value of $184 million in 2016.

It’s a little-known fact that a large portion of the grapes used in Napa Valley wines is grown in the greater Sacramento region. Little-known because up to a certain percentage, Napa wines aren’t required to disclose it. On the 25-minute riverside drive to Clarksburg to visit the Bogle Estate, I learned about the American and Sacramento Rivers’ hundreds of miles of waterways and the 30-mile long American River Bike Trail.

The Bogle family’s involvement in the wine business goes back 50 years, and the pride in winemaking and sustainability was evident during my guided tasting. I sampled 11 offerings, from their best selling Chardonnay and Pinot Noir to the reserve menu surprises, only available on-site. Among the reserve revelations, the 2017 Pinot Noir Rosé, 2014 Reserve Petit Verdot, and my favorite, the 2015 Reserve Zinfandel, which I immediately described as “raisin compote.” Aged 24 months in two-year-old American oak, the wine has dignified notes of caramelized plum, cooked cranberry, molasses, and black pepper (a steal at $24).

Speaking of locally sourced food and drink, it only makes sense that Sacramento does arena food a little differently. The Golden 1 Center, which opened in 2016, is sustainable too. They call it a farm-to-court philosophy: executive chef Michael Tuohy sources 90 percent of the arena’s ingredients from within 150 miles.

The Sacramento Kings are playing their third season in the arena but the most technologically advanced entertainment arena in the world is also a premier destination for musicians and comedians, with recent shows including Fleetwood Mac, Nicki Minaj, Kevin Hart, and the Trans Siberian Orchestra.

The arena is at the hub of what’s driving the downtown Sacramento scene. Just outside is Downtown Commons (DOCO), a three-acre plaza combining cinemas, innovative restaurants, and boutiques. The vibe is casual, with people playing games like cornhole and catching rays on the lawn. Overlooking the arena and DOCO is the chic, new Kimpton Sawyer Hotel, ready to welcome event, concert, or ball game-goers with its 250 rooms and three eateries. This part of downtown has much to offer, but don’t forget to look around. Art is everywhere.

Don’t mistake the art, even on the sides of buildings and along alleyways, for graffiti. It’s the evolving landscape of the city. Wide Open Walls, Sactown’s non-profit mural festival, has added more than 70 works of art throughout the city over the last two summers with its mission to promote and celebrate public art. The annual festival, held in August, brings local, national and international artists together to transform the city. Touring the murals with Sac Running Tours was a great way for me to get the lay of the land (non-runners take note, walking tours are available, too). We didn’t just look; we learned about the murals, artist inspiration, and history of street art in Sacramento on what felt like an outdoor museum tour.

All aboard! Taking a few steps into the 28-acre Old Sacramento State Historic Park, originally constructed in the 1850s, is like stepping back into the Gold Rush era, complete with old timey horse-drawn wagons and saloons.

The discovery of gold launched one of the greatest human migrations in history as thousands of pioneers headed toward Mexican California on the Oregon Trail in search of a better life at the confluence of the Sacramento and American Rivers. As a result, Sacramento quickly became a major commercial center and traffic route, and also served as the terminus for the storied Pony Express mail service and the First Transcontinental Railroad, which spanned 1,912 miles connecting the existing eastern rail network to the Pacific.

Old Sacramento is home to the California State Railroad Museum, the most comprehensive collection of trains and other related artifacts in North America and the Sacramento History Museum, with exhibits on the Gold Rush, newspaper business, and agriculture industries. Visitors can try their hand at panning for “gold”—the gold trough is teeming with amethyst pyrite and other shiny treasures that you can even take home.

Strong preservation efforts and nostalgic appeal make Old Sac a family-visit must. American history is reflected in the wooden sidewalks, horse-drawn carriages, old-fashioned candy shops and a Mississippi-style riverboat. Step further into the Old West by taking a steam engine ride, visiting a one-room schoolhouse, or dressing in period costumes for an old-fashioned photo, which sadly, I didn’t get the chance to do. Next time, as I plan to attend another Tower Bridge Dinner sooner rather than later—if I get lucky.

The writer was a guest of Visit Sacramento.

Sacramento is one of California’s most accessible major cities, located 90 miles from both San Francisco and Lake Tahoe and 50 miles from Napa. Arrive by air, rail, highway, or water. Sacramento experiences all four seasons, with an average yearly temperature of 61 degrees Fahrenheit. The daily average ranges from 46–76 degrees in December and January, to 93 degrees during the summer months.

The Kimpton Sawyer Hotel opened in Downtown Sacramento in October 2017, adjacent to the Golden 1 Center arena and featuring 250 rooms, including 35 suites. The boutique property’s accommodations are inspired by northern California’s natural beauty, with milled oak woodwork and subtle shades of gray and brown echoing the Sierra Nevada Mountains. Dining and entertainment options include the poolside Revival bar and lounge, Punchbowl Social, and the higher-end Echo + Rig Steakhouse. From $252 per night.

Deliciousness and fun are always in season in Sacramento. Sacramento365.com provides a good calendar.

In case your interest was piqued, the 7th Annual Farm-to-Fork Month is September 1–30, 2019. Ticket information for the 2019 Tower Bridge Dinner will be posted this summer. $200 each.

Sacramento Beer Week, April 26–May 5, 2019. The region’s craft beer scene is exploding, boasting more than 40 breweries to explore during this week of special events and tastings.

Amgen Tour of California, May 12, 2019. The cycling tour returns to Sacramento for the fifth year in a row, with the city hosting the race’s heart-pounding start through downtown Sacramento.

While cities like New York, LA, and Chicago grab the most headlines, the Sacramento region has been quietly gaining a reputation for quality, caliber, and inventiveness.

Kru: Owner and chef Billy Ngo utilizes local produce in developing unforgettable sushi creations. Rumor has it that this is where Sacramento’s top chefs eat on their days off.

Ella: Downtown fine-dining with a menu, like most of them, designed around farm-to-fork. With rotating and seasonal menus, you never know, but if the deviled eggs are available, they are a must!

Localis: Fine dining in a casual setting that feels like your own dining room. Guests can also sit at the chef’s counter for a close-up as the culinary team whips up farm-to-fork dishes.

Magpie: A favorite with the locals, Magpie was inspired by the relaxed cafes of Italy and focuses on Sacramento’s seasonal offerings.