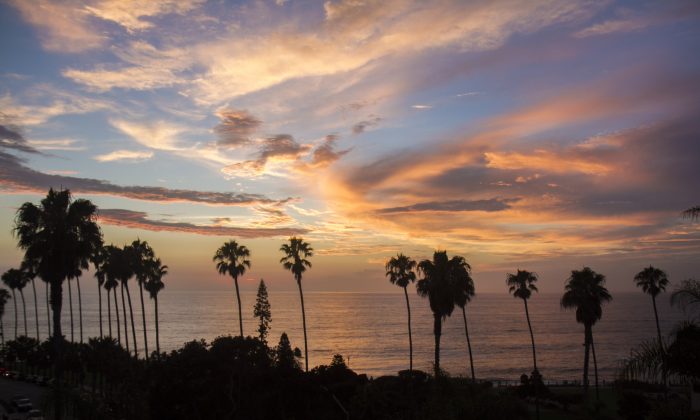 Ever sunny weather, outdoor lifestyle, and great dining make it a prime destination
By Channaly Philipp

SAN DIEGO—At high tide, waves crash against the windows of The Marine Room restaurant, a startling sight and sound.

The fine dining restaurant sits right on the beach, so close to the ocean’s edge that if you look out toward the Pacific, you can’t see sand—only waves. The shifting sunset views are so captivating, they almost steal the spotlight from your dinner companions. Cliffs rise up in the distance, with city lights flickering. When it’s not high tide, the lapping of the waves is soothing to the point of sending you into a reverie, only interrupted once in a while by people emerging out of the ocean, like mermaids or mermen. They turn out to be long-distance swimmers, who make the aquatic journey from those faraway cliffs.

Outdoor life is a constant in San Diego. Life in, or on, or above the water is busy. It’s not just leopard sharks or seals, but also all manner of human life: paddlers, surfers, kayakers, boaters, divers, fishermen, and paragliders—there’s almost always a connection from land or air to the sea.

And why not? The weather is almost always perfect and sunny. The average rainfall is 10 inches per year. When it does rain, it makes the news, like in one headline from the San Diego Union-Tribune last January: “San Diego Faces Up to 6 Straight Days of Rain.” The total damage expected was 2 to 4 inches of rain along the coast, “the rainiest period the region has experienced since late 2010.”

The Glory of Produce

That perfect, ever sunny weather has repercussions for the plate; and the farm-to-table game is strong in San Diego.

When I visited the Vista Farmers Market in San Diego County this summer, I was amazed by the opulent profusion of beautiful and delicious produce at each farm stand (many of which offered samples). I visited with chef Angelo Sosa, who spent many years in the New York City region working with chef Jean-Georges Vongerichten before moving to the San Diego area a year and a half ago. For him, the produce was an immediate revelation: It tasted vibrant, making the flavors of East Coast produce seem muted in comparison.

“I found the shift in my cooking to be more produce-driven. The produce is really the star. The ingredients are so pure, I find that I’m cutting back on the salt, and I don’t need to add more seasoning to highlight the ingredients,” he said.

At one stand, donut peaches beckoned. Sosa took a bite, pinpointing notes of coconut and pineapple.

We then came to a stand selling Hass avocados. We are deep in the heart of avocado country here, surrounded by hills of avocado groves, cut through by the so-called Avocado Highway.

Ever since I read that chef Jessica Koslow would not serve avocado toast if she were in New York, I had a singular goal to taste a bona fide southern California avocado in its native habitat. Once you taste these avocados, you see what she means: They are creamy and nutty to perfection, and I realized what I’d consistently been having on the East Coast was either just a bit underripe or else overripe with a faint taste of fermentation. It’s not the end of the world, but to truly taste avocado in its glory, you have it to have it where it grows.

Sosa gives me a parting gift: jalapeños from his garden—they hit me right away with a bold, almost laser-sharp minerality I’d never known these peppers to have.

On my way down the coast, I made a stop in Rancho Santa Fe, at Chino Farm, which is renowned for its produce. The strawberries alone are unbelievable: just pure essence of strawberry, perfectly ripe in full, unabashed splendor.

One of the restaurants that uses Chino’s produce is the iconic George’s at the Cove in the upscale neighborhood of La Jolla. Dinner there is an experience not to be missed. Of the restaurant’s 33 years, chef Trey Foshee has been there for 18. Depending on the time of year, 75 to 95 percent of its produce comes from Chino.

Right now, “sweet potatoes are insane,” Foshee said. “It’s the Chino magic touch. Part of it is the variety, and it’s grown well,” he said. “At the farmers market, you might not get produce that’s necessarily been picked the same day. It might have been picked the day before or two days before.” Foshee makes a stop at the farm on his way to work, and so the produce is picked the same day it is on the menu. When it comes to produce like corn or tomatoes, that’s key.

Ask him about his cooking style, and he’ll tell you, “if we’re doing everything perfectly, what we’re doing is something pretty simple. The ingredients are making the biggest difference, more than our technique.”

Going for a Hike

A beach walk is great fun, whether on windswept Windansea Beach, where you can watch surfers and take sunset photos from the little surf shack there, or at Children’s Pool Beach, where seals and humans can get fairly close to each other (despite official warnings to the contrary). For an almost otherworldly experience, go to Torrey Pines State Natural Reserve, where panoramic ocean views are the reward after hiking through a woodland of rare Torrey pines and coastal sage. TorreyPine.org

Getting on the Water

To get a taste of San Diego’s water-centric lifestyle, you can swim, fish, or dive, but if you want to try out your hand—and legs—at the ultimate Southern California beach pastime, sign up with La Jolla-based Surf Diva Surf School, which was started by twin sisters Izzy and Coco Tihanyi as an all-girls surf school. It now offers lessons for males and females of all ages and abilities in surfing and paddle boarding. SurfDiva.com

Landlubbers can get a look at life underwater at the Birch Aquarium at Scripps, the public outreach center of the Scripps Institution of Oceanography at University of California–San Diego. It’s especially popular with families. Aquarium.UCSD.edu

There are more than 90 museums in San Diego County. The epicenter is Balboa Park, with 17 museums and cultural institutions that could keep visitors busy for weeks on end. Highlights include the Japanese Friendship Garden, which delves into Japanese culture; the Timken Museum of Arts, with its collection of European old masters and Russian icons; and the photo-ready botanical building, with its lily pond. Downtown, the USS Midway Museum is hugely popular and gives a glimpse of life aboard an aircraft carrier. La Jolla also boasts a fascinating, under-the-radar gem, the Map & Atlas Museum. BalboaPark.org, Midway.org, LaJollaMapMuseum.org

Catching a Play or Concert

Founded in 1947 by Gregory Peck, Dorothy McGuire, and Mel Ferrer, La Jolla Playhouse is an award-winning theater, and 30 of its productions have moved on to Broadway. “The Donna Summer Musical” is playing until Dec. 17. LaJollaPlayhouse.org

In La Jolla, it is hard to miss the Spanish architecture-inspired La Valencia Hotel, known as “The Pink Lady.” It was a hangout for Old Hollywood’s glamorous celebrities, such as Clark Gable and Greta Garbo, and current celebrities love its discreet villas. At its restaurant, The Med, the kitchen staff, led by chef Alex Emery, is talented and inventive, and the oceanside dining terrace views are gorgeous. Make sure to leave room for pastry chef Ginger Niles’s excellent desserts. LaValencia.com