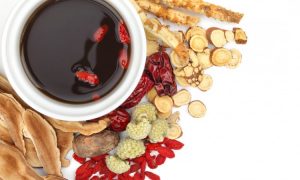 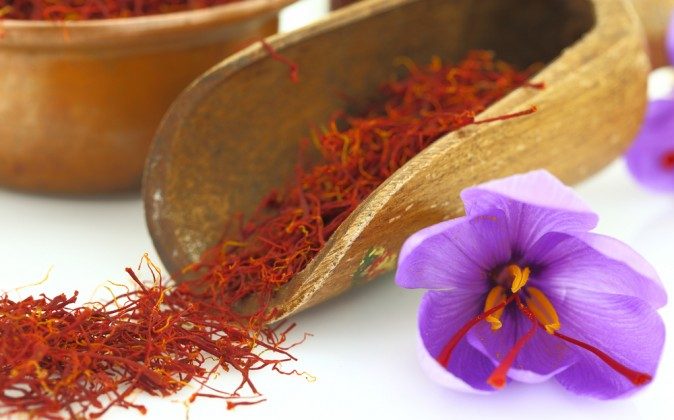 Clearly there is something magical about the Crocus sativus flower, from which the spice saffron is derived.  If its striking beauty does not immediately cast a spell on its beholder, often it simply takes experiencing the spice to fall into full enchantment with it.  While saffron is exceptionally expensive, because it takes approximately 150 flowers to yield just 1,000 mg (0.035 oz) of dry saffron threads, and costs approximately $1,000 a pound, it does not take much to have an effect. Its uniqueness is also illustrated by the fact that it shuns mechanization, requiring of its would-be possessors that it be painstakingly harvested by hand , as no doubt has been done for tens of thousands, if not hundreds of thousands of years. Because each Crocus sativus flower bears no more than four flowers, each with three vivid crimson stigmas from which the spice is derived, at most only 12 stigma are produced by each, which yields the equivalent of 30 mg (0.011 oz) of fresh saffron or 7 mg (0.00025 oz) dried.

Saffron has been documented to have been used as a versatile medicine since ancient times. In 2004 researchers studying 3,500 year old frescoes at Thera, a Greek island in the Aegean, found depictions of a goddess presiding over the manufacturer and use of a drug from the saffron flower. [i]   Perhaps even more amazing is the fact that 50,000 year-old depictions of prehistoric places in northwest Iran contained saffron-based pigments, indicating the human relationship with saffron is as old as time itself.[ii]

Saffron’s chemistry expresses otherworldly complexity. It contains over 150 volatile and aroma-yielding compounds – a biochemical symphony that ensures its mystery will never fully be plumbed, at least insofar as it great medicinal power remains refractory to the reductionist gaze of modern pharmacology. What power might that be?

While recent mainstream coverage of saffron weight loss promoting properties (via appetite suppression) on the Dr. Oz show has caused quite a surge of renewed interest in this exotic spice, saffron has far more to offer than that. It may, in fact, hold promise for serious neurodegenerative conditions such as Alzheimer’s disease…

A 22-week multicenter, randomized, double-blind controlled trial of saffron in the management of mild-to-moderate Alzheimer’s disease published in 2010, showed 15 mg twice a day was as effective as donepezil (Aricept) at 5 mg twice a day, with significantly less vomiting as a side effect. Another 16-week, randomized and placebo-controlled trial also published in 2010, showed that 15 mg of saffron twice per day was both safe and effective in mild to moderate Alzheimer’s disease.

The petals of the Crocus sativus plant have also been shown nearly equipotent to Prozac (fluoxetine) as a treatment for depression.  According to a study published in the journal Progress in Neuropsychopharmacology and Biological Psychiatry in 2007, 15 mg of Crocus sativus petals were as effective as 10 mg of Prozac in treating mild to moderate depression, putting 25% of the participants into full remission. Another depression study published 2004 showed that saffron, at 30 mg a day, was as effective as the drug imipramine, at 100 mg a day, in the treatment of mild to moderate depression.

Other experimentally confirmed, potential medicinal properties of Saffron are:

A note of caution is due with saffron, as any plant with such a great many modes of action and high biological activity at exceedingly low quantities, should be used with caution. In very small amounts, an herb like saffron may nudge a system into balance, or in a direction that the user may experience as a positive shift — for example, as occurs when saffron is used in a dish as a spice, or consumed as a tea.  However, in higher “pharmacological dosages,” especially when mixed with over-the-counter and prescribed drugs, there is a risk of doing serious harm. Therefore please be careful, and consult a medical herbalist and/or physician whenever possible before using more than culinary doses of saffron

*Image of “saffron” via Shutterstock