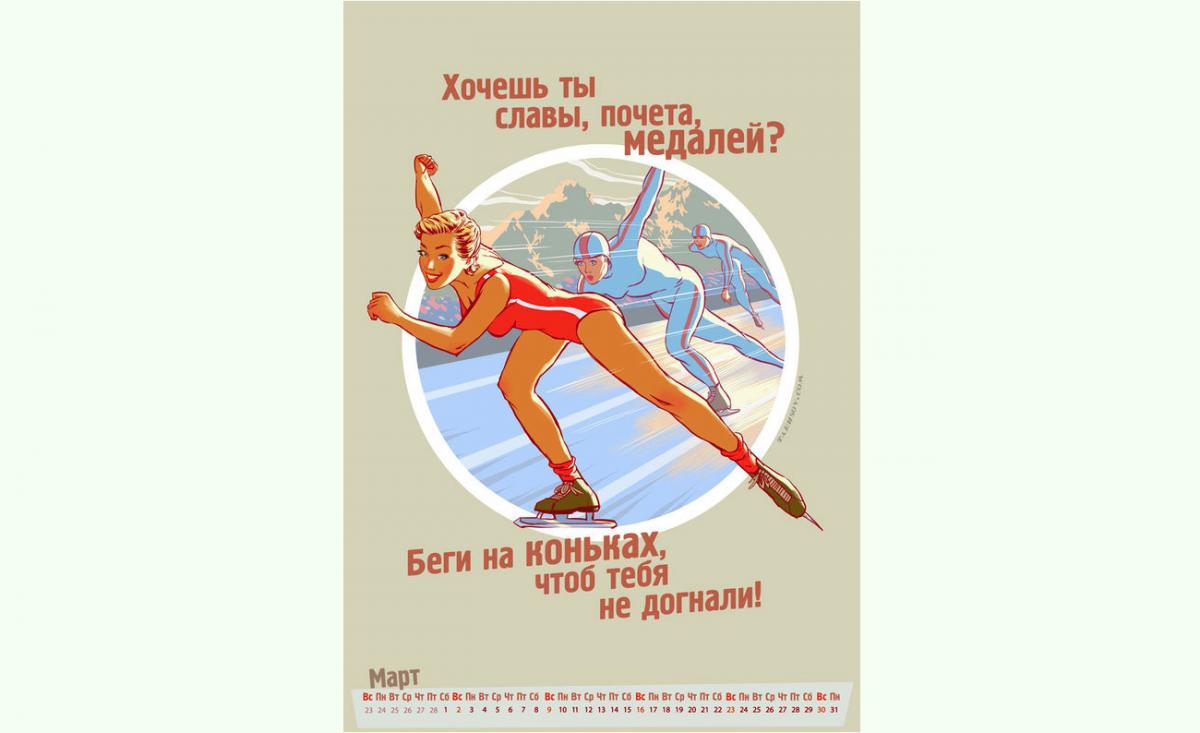 With Sochi 2014 right around the corner one Russian artist breaks free of the bonds of tradition with an Olympic calendar concept full frontal original, previewed on a social Crowdfunding portal called BOOMSTARTER.

In the so-called “West” we’ve all heard of this kick starting or crowdfunded social network or other, that Indiegogo initiative, a diverse set of platforms for getting initiatives going. Looking farther East this morning I ran across an artist named Andrew Tarusov, an illustrator with a novel and fab idea to create a pin up calendar for the coming Sochi Winter Olympics. Sure, pin up girls in ski outfits is not new idea, but Tarusov’s idea to connect East and West, that is genius.

Through the “miracle” of Facebook (and Google translate) anybody who’s a fan of either retro pin up art or Winter games can catch a glimpse of what Tarusov described as a sort of melting together of American 50’s pin-up sex appeal and Soviet Russia fervor. The resultant art is unexpectedly fabulous. More than this, the absurd irony and humor of the concept mirrors what I’ve lately discovered about Russian humor – that is, humor at the level of extreme sport.

On the “tangent” of Russia’s sense of funny, in the Soviet era making political jokes was pretty much a capital offense. Ergo people there these days have a funny bone unlike anywhere else on Earth. I first noticed this in following the Voice of Russia on Facebook, but back to BOOMSTARTER and what could be one conduit of commonality in between Russia and the West, America at least.  Though Tarusov’s appeal for help from the Sochi 2014 Olympic committee failed, the illustrator’s vigor for expressing these games and his art turned to Crowdfunding as a means of getting the idea across.

Seeking donations like someone might for a tech start-up or any other product launch, Andrew Tarusov sought 120,000 rubles so he could print his wonderful calendar. What makes this story of Russian social collaboration so vivid however, is the fact Tarusov has become a sensation. That 120,000 rubles ($3620 US) quickly became 963,972 ($29,083 US), and the artist is potentially on his way to a lot more fame and fortune. As you can tell from the presentation below, Sochi’s reservations about using the calendar may have been too prudish.

Anyhow, I thought you might all be interested in a bit of social media news outside the norm. For those of you who like Tarusov’s art and who might consider the 2014 Olympics at Sochi well endowed to feature such an official calendar, you can Tweet the President of Russia at @KremlinRussia_E and/or the Sochi Games committee via @Sochi2014. I suggest you use the hashtag #Sochi2014. By the way, Vladimir Putin does in fact pay attention to social media channels.

Phil Butler
Follow
Phil Butler is a publisher, editor, author, and analyst who is a widely cited expert on subjects from digital and social media to travel technology. He's covered the spectrum of writing assignments for The Epoch Times, The Huffington Post, Travel Daily News, HospitalityNet, and many others worldwide.
SHARE
Friends Read FreeCopyFacebookTweet
You May Also Like