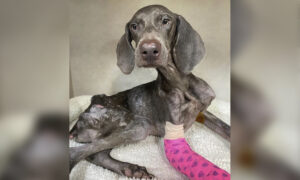 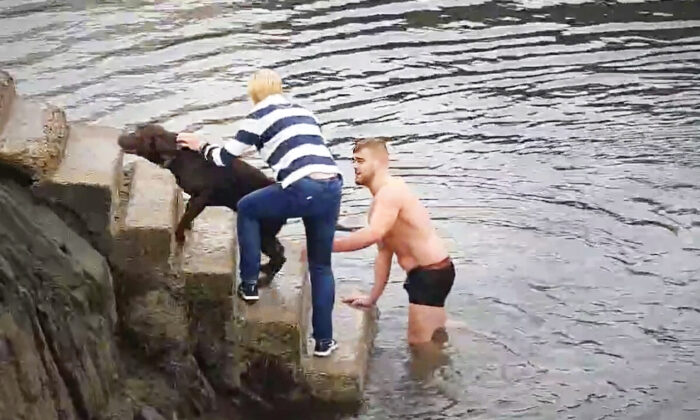 A rugby player from Co Down, in Northern Ireland, leaped into freezing seawater to rescue a drowning Labrador last month, likely saving the dog’s life. The dog’s owner says they are grateful, and the “dog is fine now.”

When Paddy Bond was visiting some friends near Bangor’s Long Hole, he saw a crowd gathering near the water’s edge. When he looked closer, he saw a dog in the water, tangled in the mooring ropes.

“When I looked closer I noticed they were all looking at a dog,” he told Belfast Live on Nov. 30, the day after the rescue. “I ran down to get a closer look.”

As he drew closer, he heard a dog yelping in distress.

Paddy didn’t hesitate. He stripped down to his boxers and swam to the animal’s aid.

The dog, a brown Labrador, was grasping some of the ropes with its teeth; its feet had been entangled in the ropes and the dog was struggling to stay afloat.

Luckily, the brave 24-year-old was able to reach the dog in time. He untangled the ropes and led the dog to safety.

One of the onlookers, Stephen Murray, told the news outlet that they hadn’t realized the dog was drowning at first.

“The owner said his dog loves swimming,” he said. “We all thought that the dog was just stubborn and wouldn’t let the rope go out of its mouth—but when Paddy got to it its back legs seemed to be tangled up in the old mooring rope.”

Paddy says he was shocked to hear applause as they exited the water.

“I was totally shocked by the reaction,” he said. “I didn’t realize there were as many people there.”

Though the heroic rugby player often swims recreationally, he joked that this wasn’t his idea of a leisure swim.

“Not the best time of year for a swim but [I was] happy I could help the poor pupper,” he said. “I have a dog [Sheba] at home and I’d expect someone to help her if I wasn’t there.”

The dog’s owner thanked Paddy for his help, but he said after the cold swim and the unexpected crowd, he just wanted to go home and take a hot shower.

“His owner thanked me and asked my name but I was in a hurry to get out so I just left,” Paddy said.

Later that night, the dog’s owner posted online that the lucky Lab is doing just fine at home, “relaxing” and “enjoying his dinner.”