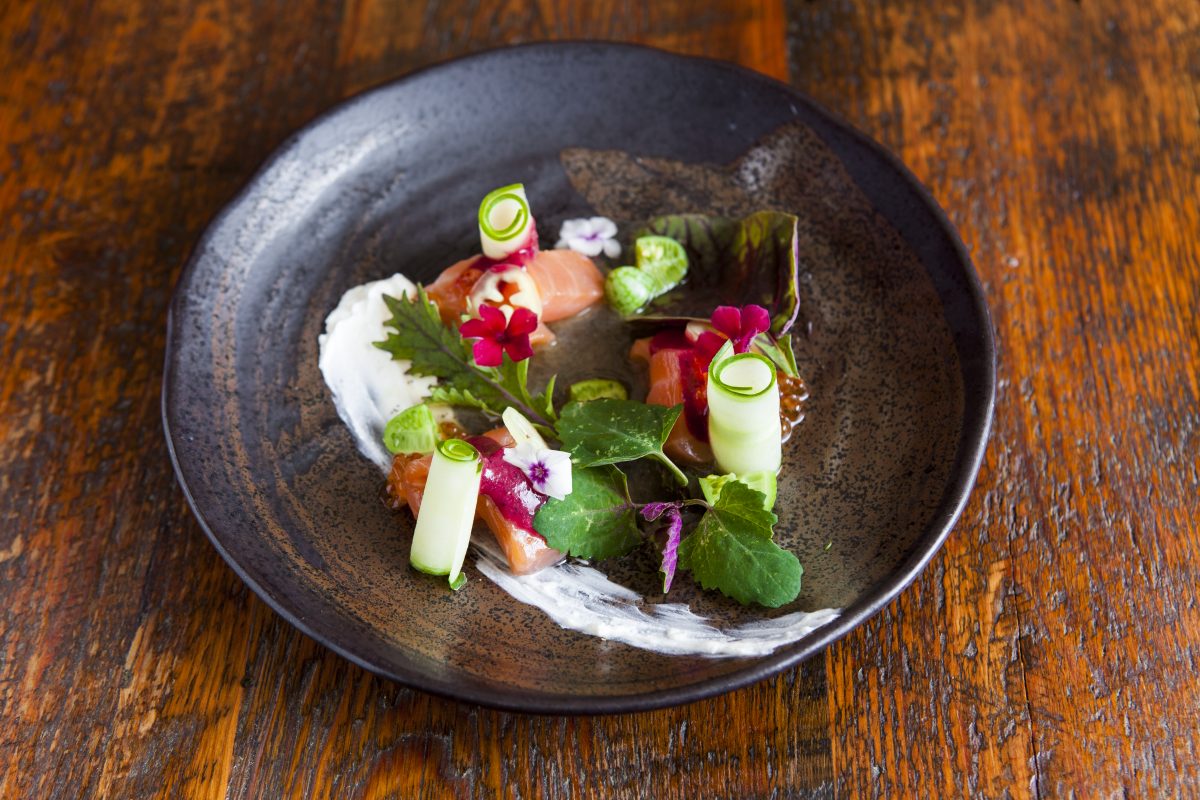 Take a sip at Rouge et Blanc and you’ll be whisked off from SoHo to a vineyard in France.

The all-French wine list is meticulously curated by owner Thomas Cregan, whose has more than 20 years’ experience weaving through the back roads of France searching out excellent wines made by small producers.

Wines from the Old World have captured his imagination ever since he studied in France during college. Cregan named his restaurant Rouge et Blanc after wines, of course, but also as a homage to Stendhal’s novel “Le Rouge et le Noir.”

“There’s something very attractive about this old school kind of—in French you say ‘honnête’—authenticity of the whole practice. Even though we’re in New York, and you’re talking on your cellphone, you have this wine, and you reconnect with this past history and structure,” he said.

Monks in Burgundy, he pointed out, have adjusted how vines grow for hundreds of years. “[They might say] ‘The snow melts first in the spring on this side, so let’s plant vines there.’ And 30 years after that, they’ll say let’s train the vines a different way because they’re too close the ground, and the grapes get moldy. There’s an understanding, a feeling for the microclimate, and what grapes grow well there—and then you let the grapes grow.”

In California’s Napa Valley, he points out, most the vineyards are watered. “In France, if you have an appellation, it’s illegal to water the vineyards. The premise is they should be growing in an area which is suitable for the grapevines.”

He prefers wines that are “terroir-driven, that reflect the place where they’re from, and not the imposition of the winemaker on the grape.” Example of an interventionist method is spinning off water from the wine to increase alcohol content and flavor intensity or the use of cultured yeast.

Natural wines are a big trend in France, and even top domains such as Romanée-Conti have adopted biodynamic methods.

Cregan, who competed in Best Sommelier in America competition in 2011, took eighth place. All this happened during the time he was opening Rouge et Blanc. “The dishwasher is broken, health inspectors are coming in … after that, I said no more competitions,” he said.

Burgundies—red and white—rank among his favorites. “They’re great food wines because they have nice acidity. The alcohol is in balance.” Working with an exporter in Beaune, Cregan obtains ready-to-drink vintages of premier cru and grand cru burgundies at very reasonable prices.

The list includes food-friendly wines, lesser known appellations like Cour-Cheverny in the Loire (a cousin to chardonnay, said Cregan), Pouilly-Fumé (less well known than sauvignon blanc but good value), and wines, like vin jaune from the Jura, made from indigenous varietals.

As for Champagne, Cregan said, “If you go to a wine store and you don’t recognize the name, that’s a champagne you should get, it’s more likely than not a growers’ Champagne” made by a producer who grows its own vines. The opposite would be brands like Veuve Clicquot, Moët & Chandon, or Taittinger who buy all their grapes. “It’s like Costco or handmade in Williamsburg, that’s the difference.” Cregan’s selection of Champagne includes Paul-Etienne Saint Germain and Jacquesson.

With the all-French wine list, Cregan could have gone with a classic French bistro formula or steak-frites and vegetable gratin. That might have been a too-obvious answer.

Instead, Rouge et Blanc carves out a niche for itself with a creative, adventurous menu, with French and Vietnamese influences.

French classical technique is paired with Southeast Asian ingredients, and the result is bold flavors, with plenty of brightness, accompanied sometimes by heat and smoke. When you learn that executive chef Macks Collins and sous-chef Bryan Kidwell are from South Carolina and Virginia, respectively, you can see the southern sensibility underlying many of the dishes.

But unlike some places where an amalgam of culinary traditions seems too much of a stretch, the meeting of France and Vietnam and the American South doesn’t feel forced. France and Vietnam share a history, for one thing. And the connection between the cuisines of the American South and Southeast Asia draws on some shared elements: an affinity for pickling, and flavors that are sweet, acidic, and at times, spicy.

Brussels sprouts get a bright, bold treatment, fried and dressed in a Korean chili vinaigrette, with an added crunch from corn nuts ($9). Finding corn nuts in a dish was unexpected, but it gave an extra addictive boost.

There’s also Hanoi Fried Chicken ($20), brined in fish sauce and palm sugar, among other ingredients, that turns out crispy and delectable. Beyond its brine, the chicken gets the good old-fashioned buttermilk treatment. It’s essentially Southern fried chicken, with Southeast Asian ingredients.

“Fish sauce and palm sugar is our balancing act,” Collins said. “I’ve been around a few Thai and Vietnamese cooks and watching them season thing with a little more palm sugar, a little more fish sauce—they cancel out—and they build and build until you can’t take it anymore. They just got so beautifully together.

“It’s one of those magical little things—that fish sauce-palm sugar combination. It’s hard to explain to people when they smell fish sauce, how beautiful of an ingredient it is because it does not smell so nice.”

A Confit Charred Octopus was inspired by a recipe by renowned French chef Bernard Loiseau, a dish of frog legs with a garlic and parsley puree. The garlic was cooked over and over to make it mild, said Collins.

Here, Collins and Kidwell make a confit of octopus—cooking it for five to six hours in duck fat until tender. It’s then grilled, and served with a cilantro emulsion with a surprising bite that keeps you going back for more. The deep green sauce has lemongrass ginger, chilies, and garlic—and of course, fish sauce and palm sugar ($14).

The preservation techniques they often resort to—smoking, pickling, making confits (duck fat is prevalent)—harks back to necessity. The kitchen crew is minimal, with Collins and Kidwell doing their own prep.

There are also milder dishes. Though the crémants and some of the wines, like the Alsatian rieslings or Gewürztraminers pair well with the spicier dishes, other wines demand tamer companions. Cregan, for example, makes sure to ask at staff meals if dishes are spicy. “We’ll sneak something in and he’ll blow his palate up and he won’t be able to taste anything for the rest of the day,” admitted Collins.

A dish of slow roasted carrots offers up a lovely combination: earthy, smoked carrots with the creamy purity of goat cheese, topped with sunflower seeds ($17).

A crisp, seasonal vegetable salad also weighs in on the milder spectrum of the scale, but still exudes notes of curry ($14).

A roasted quail comes with a cloud of a croquette, which turns out similar to gnocchi but made with yucca rather than potato ($24). It also comes with a red chili jam, which to me was too sweet and unnecessary.

Beside milder dishes, the menu reflects Collins and Kidwell’s love for highly seasoned dishes, and especially the bright and acidic flavors beloved by chefs.

But diners’ expectations of refined dining can clash with that vision. Some may expect dishes that are “more subtle, like the way the Scandinavians eat, the way the Japanese eat—very, very mild and subtle,” said Collins, “and we try to put out a few dishes like that, but the way we grew up and the way we like to eat … our palates and our mindsets are on the more aggressive side of things.”

“Not to say that we are disappointed every time we eat out, but a lot of chefs seem to play toward the safe side as far as seasoning goes. We know how cooks and chefs eat. Every chef you talk to is going to be about that super acidic stuff. So we wanted to be that place,” he added.

Some may consider the prices of the dishes to be on the steep side considering the portions. You’re likely not going to be stuffed at Rouge et Blanc. But there is a different rhythm to things here, with its emphasis on wine. The setting feels intimate, and there’s deliberate space given to conversations. The music is never obtrusive. It is one of those rare places where you don’t have to raise your voice to be heard, even if you’re soft-spoken.

Chocolate desserts often cater more to the preferences of dark chocolate lovers, while those who prefer milk chocolate are often relegated to the candy aisle.

The Gâteau au Chocolat au Lait ($14) gives lovers of milk chocolate something to talk about. A 40 percent Valrhona gets turned into a thick ganache, to be poured over a chocolate cake, with marshmallow fluff and a Graham cracker crumble, and vanilla ice cream.

There’s a secret ingredient in there: sweet condensed milk (it’s also used to sweeten Vietnamese coffee), but it lends a nice sticky gooeyness to the ganache, Collins said. The sweet-savory crumble of Graham crackers adds a nice balance.

France Versus The World

Cregan regularly pits French wines against wines from other countries in tastings. One tasting this summer saw Long Island go head to head with France. The blind flight included a Domaine Rapet, Pernard-Vergelesses, Les Combottes 2012, and on the home team, a Paumanok, North Fork of Long Island, Barrel Fermented Chardonnay 2012—both made from the chardonnay grape. Collins had prepared cured Arctic char. “Macks and I agreed that the weight of the oaked chardonnay holds up well to the richness of the fish,” said Cregan.

The jury seated around the zinc bar delivered a close verdict: advantage France. In the end, the Domaine Rapet won out because of its complexity.

Cregan is also launching a French Wine Mingling event every third Thursday of the month, starting on Oct. 23. Aspiring oenophiles can mingle and learn about French wines. The tasting includes three different wines, hors d’oeuvres for $25 a person.

As the chill of fall starts to set in, Cregan’s recommendations for the season include a Domaine de la Verrière, Ventoux 2013 from the Rhône Valley ($13 a glass) “Lots of ripe white fruits and full body thanks for its high percentage of Roussan grapes,” he said.

Another is a Domaine Alain Michelot, Bourgogne 2010 red, with its “excellent balance of earth, dark cherry, and refreshing acidity.” Cregan has visited the vineyards a couple of times in Nuits-Saint-Georges. “We always have some of their older premier cru wines, which come directly from their cold stone-vaulted cellars,” by the bottle or the glass.

What about a splurge? Cregan recommends a bottle of Domaine Lou Dévet, Châteauneuf-du-Pape, cuvée François-Louis 2007. It’s “a special old wine selection from a great vintage that is drinking well now and perfect with our Vietnamese Beef Cheeks,” he said.