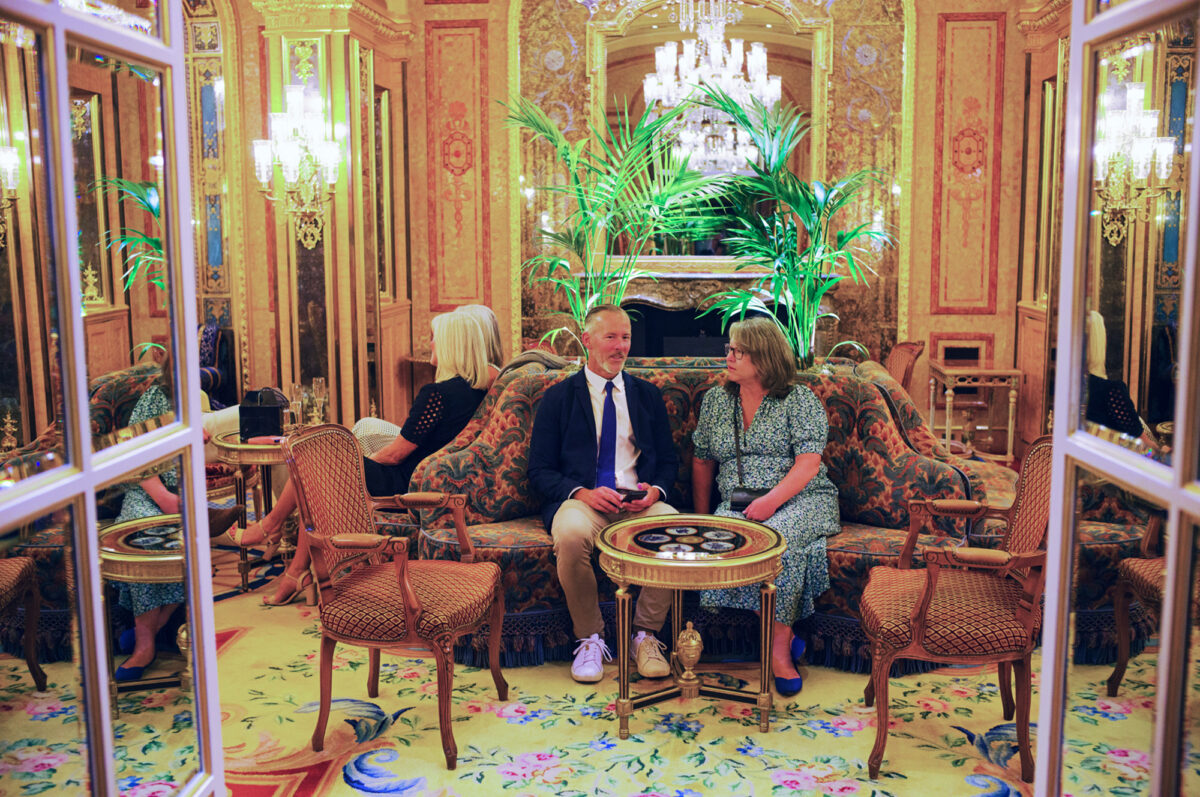 A couple wait their turn to be seated in The Palm Court for Afternoon Tea at The Ritz London. (Alan Behr/TNS)
Style

I had cautioned Ryan that, whatever else we did on our father-son military history tour of England, we would begin with live-fire etiquette practice in preparation for a big event we would shortly be attending. Owing to a transit strike (which seems to occur every other time I visit Britain), the etiquette coaching service I had attempted to hire could not get its people into London. There was nothing for it but to take on the ennobling task myself. If I should prove up to it, the test for Ryan, 13, would come two days hence at no less a venue than the British Museum.

Our first stop: my tailor on Savile Row, Henry Poole & Co. Alex Cooke, my cutter and a co-managing director of the family-owned, two-century-old firm, met us sleepy-eyed at the door. Due to the strike, someone had to spend the night in order to get things going in the morning for whatever staff and customers could make it in, and Alex had drawn that lot. Ever the model of grace under pressure, Alex has spent years pulling cloth around me so as magically to coax elegance from my sloping shoulders and severely V-shaped torso. He now brought out my Norfolk jacket for its second fitting. A Norfolk is a country squire’s shooting jacket. In my case, the shooting would not be done with a double-barreled shotgun but with a brace of Leica M cameras, the jacket’s distinctive, expandable front pockets to be filled not with shells but with filters and spare batteries.

In order to show Ryan that a gentleman’s wardrobe is grounded in the same care and respect that a gentleman need show others, Alex brought Ryan downstairs for a tour the workrooms. Master craftspeople demonstrated for Ryan how bespoke (custom-made) suits and jackets are sewn and pressed into the look that is the distinctive London cut. Ryan took it in, visibly impressed with the skill and diligence.

As a thank you, I left behind for the team a carefully boxed, genuine American apple pie that I had brought over from New York City. My final words to Ryan as we were leaving: “When you’ve grown to full height, we will be back, and if you would like, the jacket Alex makes then will be for you.” He considered the opportunity, noncommittal at this time.

Our next stop was my shirtmaker, Turnbull & Asser. Steven Quin, the patient bespoke specialist who keeps my gorilla neck and orangutan arms stylishly contained within the brand’s distinctively crisp-looking shirts, showed Ryan how to choose cloth, collars and cuffs. With an assistant, he measured me for the adjustments to my paper pattern needed to compensate for changes in my physique caused by working out more during the pandemic.

He took Ryan around the shop, identifying with him pictures on the walls of the famous men in history who have been bespoke customers. Their current ranks include the Prince of Wales and, if Ryan wishes, future ranks will include him. In the meantime, Ryan picked two swatches to be made into my next shirts, and we went on for our next challenge: shoes—that is, his, not mine.

We had brought with us an Izod blazer and an Isaac Mizrahi suit for Ryan, fine cotton shirts from the Peter Elliot boutique in New York—and a pair of sneakers that looked as if they had just arrived back from the successful defense of Kyiv. It was time to show Ryan that shoes can be made of leather. We rounded a couple of corners for the Church’s shop on Regent Street. The saleswoman offered Ryan shoes that cost more than any of mine. She also handed me an iPad and said that, if I filled it out, I might get a discount. The first question that the digital form asked me is if I was a celebrity. I answered in the affirmative, and the price slid agreeably downward. In homage to Elvis Presley, Ryan left carrying a box of blue suede shoes. He loved them (thank goodness), and they added a mature, sophisticated accent to his own style.

We soon arrived on the etiquette proving grounds: The Ritz London, for its traditional afternoon tea. Ryan wore his blazer (on which Dad had lovingly hand-sewn a full set of silver and blue buttons bearing reliefs of Grecian urns). There was no mistaking that here was a fine young gentleman, and, sure enough, other patrons were soon chatting as affably with him as if he were a regular.

On a small stage in the large room, The Palm Court, a pianist played familiar tunes. Our waiter came by and the ritual started: a tray tiered like a wedding cake carried such favorites as crustless tea sandwiches with smoked Scottish salmon, cucumber and steamed chicken breast. Wilshire ham appeared, cocooned within brioches.

The tall, stout deputy manager, Giancomenico Scanu, came by to greet us. A native of a village in Sardinia, Giando (his nickname) explained that he had come to appreciate tea to its fullest only once he had started working at The Ritz. He has taken that appreciation to the level of mastery, and he proudly showed Ryan a tea blend of his own creation; he had found a way to do the seemingly impossible and bring the flavor of chocolate to black tea without adding any of the murkiness you get when chocolate is immersed in water. There were notes of mint as well, and to make it even more kid-friendly (this was actually the first cup of tea Ryan had ever tried), the mixture had been decaffeinated.

Holding his cup like a proper Englishman, Ryan showed his gratitude. Tea being a passion of mine, I had an informative time talking shop with Giando.

Ryan’s reward came on the next tiered tray, which brought us the savory things that follow the sandwiches as you finish your tea: scones with clotted cream, Valrhona chocolate pastries, strawberry biscuits and more. Ryan could not have been more gracious.

The next day, Ryan took to the etiquette field of battle. He and I arrived at the auditorium in the British Museum as an international conference was finishing up. On tables outside were copies of the legal book that was being launched that day, and as co-editor of the work, I had been asked to make a few remarks. The book was about luxury law, and Ryan, now in his suit and wearing his blue suede shoes, was to serve as my stylish personal videographer.

The business portion of our trip now concluded, we both packed away suits, jackets and leather shoes and, in a rental car, drove southwest to continue our military history tour. There would be a memorable day at Tankfest, the annual celebration of armored vehicles given at the Tank Museum in Bovington. We would then reach the naval base at Portsmouth, there to tour Lord Nelson’s flagship at the Battle Trafalgar (1805), the carefully preserved HMS Victory (still an active warship in the Royal Navy).

Ryan would even consent to a visit to Stonehenge. Assessing the cultural experience while waiting for the bus back to the monument’s Visitor Centre as a steady rain soaked through our jeans, he would offer, “We drove all the way out here for a bunch of wet rocks.”

Only partially dried ourselves, as we made to leave for the drive to Heathrow Airport, an affable Oxford University professor and I grazed our rental cars in the parking lot. We could not yet say why—which is perhaps why we both have written articles about our time together—but we thought that a fitting end to a trip uniquely blessed with surprises, humor, and irony.

Ryan also came away with a new appreciation for, as I had explained in my book, the grace and personal refinement that luxury quietly announces and supports. And to his list of favorite foods, we can now add Scottish smoked salmon.

Style tip:
To be sure, if you are not launching a book at the British Museum, you can confidently enjoy London on a more casual basis, but jackets and ties are still required for men when taking afternoon tea at The Ritz.