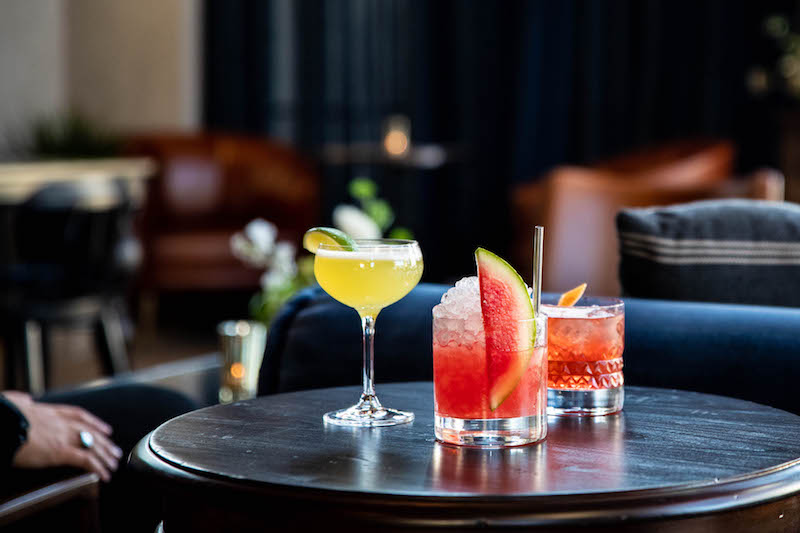 “RiNo reminds me of Williamsburg in 2004—just pretentious enough to be good, not yet pretentious enough to be annoying.” Kevin Burke is joking, of course. As the general manager of American Bonded—one of the hottest new watering holes in one of the hottest enclaves in Denver, which itself is consistently ranked as one of the most desirable cities to live in—he knows all too well that the River North Arts District is years ahead of, not behind, Brooklyn’s cultural epicenter.

Am I joking, too? Maybe, maybe not. As of today, a neighborhood that no one had heard of a few years ago has carved itself out from the intersection of four long-established neighborhoods to house dozens upon dozens of restaurants, coffeehouses, coworking spaces, boutiques, and art galleries—all in less than three square miles. Heck, it’s even got three food halls to Williamsburg’s one—the oldest of which, The Source, is about to open an adjacent hotel complete with a satellite of Fort Collins craft-beer pioneer New Belgium. And speaking of beer: We’re talking more than a dozen breweries, plus two cideries, two urban wineries, and a distillery as well as countless bars—each more representative of RiNo’s specialness than the last.

Depending on your mood, a night out here could take any number of directions. Feeling fabulous? Get your snazzy self to Bar Helix, where the yacht rock-inspired, gritty-meets-luxe setting sparkles like a glass of bubbly—not coincidentally a focus of owner Kendra Anderson’s beverage program, as are sultry seasonal negronis. Then amble over to Art Deco-drenched Nocturne for another round, accompanied by raw oysters and live jazz.

Keeping it casual? Kick back in the yard at Finn’s Manor, where elaborate daily punches and rotating cult beers pair with eclectic plates from the vendors parked in the onsite food-truck pod—or have a field day among the 40 self-serve taps that line the walls at First Draft Taproom & Kitchen.

Fancy a fine whiskey al fresco? Hit the rooftop deck of the aforementioned American Bonded, owned by celebrated barman Sean Kenyon, who calls it a halfway point between “the rocking neighborhood bar and the cocktail lab.” Fancy a fine whiskey in a former boiler room? Bask in the crimson glow of Izakaya Ronin’s basement nook while splurging on its selection of hard-to-get Japanese labels. Looking for a neo-speakeasy attached to an art gallery? (Of course you are.) RiNo has two: Pon Pon Bar and Millers & Rossi. Or one that doubles as a furniture showroom? Check out greenlight LAB, the offshoot of a design-and-architecture firm where the decor’s as apt to change as the experimental drink list.

With this kind of energy, no wonder so many notable outsiders are staking claims here. This spring, RiNo became home to the only outpost of renowned bar Death & Co. outside of New York City. This summer, Alex Liberati of Rome’s Revelation Cat Craft Brewing will launch Liberati, reputedly the only “oenobrewery” dedicated solely to grape-based ales in the world. (He’ll be joined by two James Beard Award–winning chefs, Austin’s Tyson Cole and New Orleans’s Alon Shaya, which are both opening their first restaurants beyond their home states. But the RiNo dining scene’s a whole other article.)

And in June, Josh Sampson, who moved here a couple of years ago from, you guessed it, Williamsburg to help put RiNo on the map with marketplace festival The Big Wonderful, opened BOOZ hall with partner Brad Lewis. It houses five tasting rooms, each with what he calls its own “handmade house-party vibe,” for what will be a rotating lineup of Colorado distillers and winemakers pouring their wares amid local art and live music.

Granted, it’s also no wonder that residents are pressing city officials to prove that RiNo is indeed way ahead of Williamsburg by keeping gentrification in check. As Kenyon observes, the district has to “take care of its neighbors to remain vibrant and diverse.” Promisingly enough, the developer most credited with revitalizing RiNo, Zeppelin Development’s Kyle Zeppelin, is also joining community organizers to lead the charge for affordable housing.

Meanwhile, his latest mixed-use project, Zeppelin Station, is connected by a pedestrian bridge to the light-rail depot that in turn connects RiNo to both downtown and the Denver International Airport, encouraging the use of public transportation by locals and visitors who want to explore all the area has to offer. That includes the not one but two funky cocktail lounges that await in the Station’s ground-floor food hall, Big Trouble and Kiss & Ride. The former’s inspired by expat haunts in Southeast Asia, the latter by the kind of bar you find in train stations across the globe—where people from all walks of life gather at all times of day to relax over a round of drinks. Come to think of it, that pretty well sums up RiNo itself.